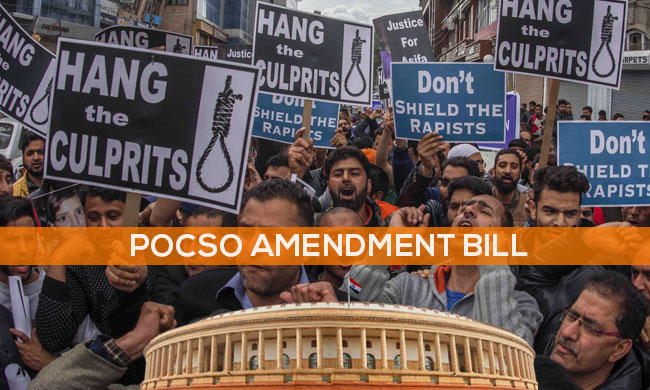 The Lok Sabha on Thursday unanimously passed the bill to amend Protection of Children from Sexual Offences Act 2012 (POCSO) to provide stricter punishments for child sex abuse. The Rajya Sabha had cleared the Bill on July 24.

The Bill adds two more offences to the definition of aggravated sexual assault. These include: (i) assault committed during a natural calamity, and (ii) administrating or help in administering any hormone or any chemical substance, to a child for the purpose of attaining early sexual maturity.

The Bill defines child pornography as any visual depiction of sexually explicit conduct involving a child including photograph, video, digital or computer generated image indistinguishable from an actual child.

Kanimozhi from DMK and Shatabdi Roy from TMC opposed death penalty saying that there is no basis for the presumption that it will act as a deterrence.

During the discussion in the house, the Unnao issue was brought up by opposition members. There should be safeguards to ensure that investigation is not derailed by powerful persons, the opposition members said.

Union Minister for Women and Child Development Smriti Irani said that the Centre has allocated funds for establishing fast track courts for trying POCSO cases and will closely monitor their establishment and functioning by collaborating with the State Governments and High Courts.