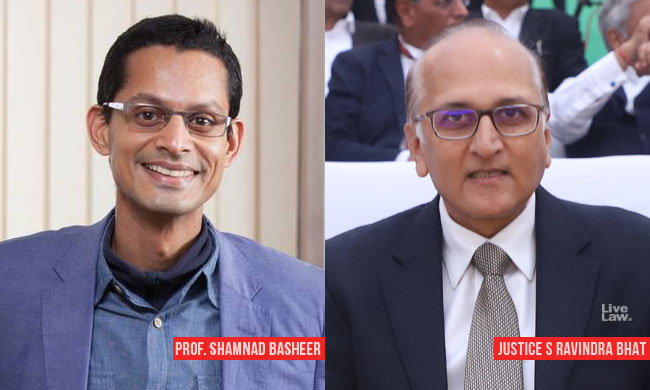 Late Prof. (Dr.) Shamnad Basheer and Justice S. Ravindra Bhat are the two Indians who made it to the list of 50 Most Influential People in IP 2019.

Prof. Basheer was an Indian legal scholar and founder of the blog SpicyIP. He was also the founder of IDIA, a trust which works on making legal education accessible for underprivileged students. He has been recognized as one of the most influential personalities in the field for his outstanding contribution. This is the second time that he has been included in this annually published list, the first time being in 2015.

His entry reads as follows:

"The work of late Shamnad Basheer….cannot go unnoted. The scholar and writer was well known on the IP circuit and taught at various universities including George Washington University in Washington, DC and Kolkata's National University of Juridical Sciences. His passing this year reminds us, however, of one of his most significant contributions to IP – his intervention in the landmark patent case in 2013 of Novartis v Union of India & Others. The Swiss pharma company had taken its attempt to patent the cancer-treatment drug Gleevec (imatinib), which is also sold by generic drug makers at a lower price, all the way to India's Supreme Court. Basheer argued against Novartis' attempt – for which he won many plaudits. According to Indian legal news website Legally India, this was the first time an academic had intervened in a case in India. Not just a highly intelligent man but also a kind-hearted, caring man, Basheer founded Increasing Diversity by Increasing Access to Legal Education, a programme that empowers students from under privileged backgrounds to pursue a career in law. Basheer was also the founder of the popular SpicyIP blog, covering IP law developments in India…"

Justice Ravindra Bhat, Judge of the Supreme Court of India, was also recognized in the list for making an "extraordinary contribution" to Indian IP jurisprudence through "cogent" judgments; particularly during his tenure as a judge of the Delhi High Court. This is the second time that he has been included in this list, the first time being in 2010.

His entry acclaims two significant judgments delivered by him. First being F. Hoffmann-La Roche Ltd. & Anr. v. Cipla Ltd., 148 (2008) DLT 598, wherein Roche's plea to injunct Cipla from marketing a lung cancer drug was dismissed on the grounds of public interest. Justice Bhat had ruled, "fascinating characterization of the public interest involved in, and the life-saving nature of, the drug in question playing a large part in the evaluation of the imponderables."

The second is the one in Nuziveedu Seeds Ltd. & Ors. v. Monsanto Technology Llc & Ors. (2018), wherein Monsanto Technology's plea alleging that Nuziveedu Seeds was selling BT cotton seeds using their patented technology even after termination of licence was dismissed.
Justice Bhat had observed that the sub-license agreements were illegally and arbitrarily sought to be terminated by the plaintiffs and held that the parties were bound to be treated as continued to be locked with each other in the arrangement.