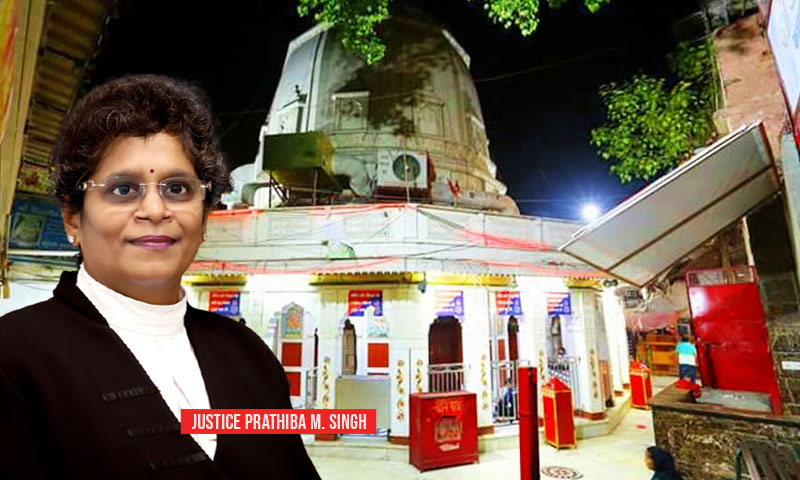 Observing that the occupants of the dharamshalas and pujaris cannot claim a vested right to remain in city's Kalkaji Temple premises, the Delhi High Court has directed that such dharamshalas shall be vacated on or before 6th June, 2022.

Justice Pratibha M Singh, who was dealing with a bunch of pleas concerning redevelopment of the temple premises, added that in case of failure to comply with the direction, the concerned SHO shall take steps, in consultation with the Administrator, to evict the said pujaris and the dharamshala occupants.

"It is made clear that this would, however, not prejudice the rights of the dharamshala occupants and the pujaris to appear before the ld. Administrator and to give their suggestions/recommendations in respect of the redevelopment plan, as also, to make submissions as to the manner in which their interests ought to be accounted for in the overall redevelopment of the Kalkaji Mandir," the Court added.

The Court also said that the pujaris and the occupants of Dharamshalas have come into occupancy of the said premises with a view to render services to the deity and thus, claiming of such private individual rights on the said land is not permissible.

"The redevelopment of the Kalkaji Mandir premises is in the utmost interest of the lakhs of devotees who are visiting the Mandir. The same cannot be sacrificed for the private interest of the pujaris and the dharamshala occupants, some of whom are also using the same for commercial purposes as is recorded in the ld. Administrator's report. Be that as it may, the said occupants of the dharamshalas have already been permitted to appear before the ld. Administrator in order to give their suggestions and the manner in which their interests ought to be taken into consideration in the overall redevelopment of the Kalkaji Mandir," the Court observed.

The Court observed further that the the pujaris, being persons who are at best serving the deity, have no rights to remain in occupation of the premises and cannot be permitted to obstruct the process of redevelopment of the Kalkaji Mandir premises which is in the larger interest of the devotees.

The matter will now be heard on July 15.

Importantly, the Supreme Court later refused to interfere in the plea challenging the eviction of the said unauthorized occupants of Jhuggis and Dharamshalas. However, it granted petitioner the liberty to approach the Administrator appointed by the High Court for redressal of grievances.