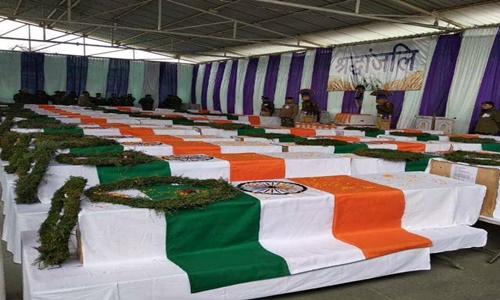 Senior advocate Rajdeepak Rastogi, Additional Solicitor General of India for Rajasthan says he is going to sponsor the education of two kids of any two CRPF personnel who were martyred in Thursday's Pulwama Terror attack.

Five CRPF personnel martyred in the attack were from Rajasthan and the ASG's team will meet the bereaved families soon.

The ASG says he is going to sponsor the education of two children of two martyrs for their lifetime and adds that he feels a heightened sense of responsibility to do so as he has received part of his education from Military School.

Rastogi's 150-advocate strong team is going to meet the families of the martyrs and assess their needs and then sponsor two children.

"My team will conduct a survey, meet the families of the martyrs. Each one the team members are fully motivated and we will soon be identifying two kids whose education we will sponsor for a lifetime," says Rastogi, who has already sponsored the education of five other children.

The ASG adds that that though he is sponsoring the entire education of two children of the Pulwama martyrs as of now, but if at any point in life, he feels the need, he will bear all the expenses of these two children.