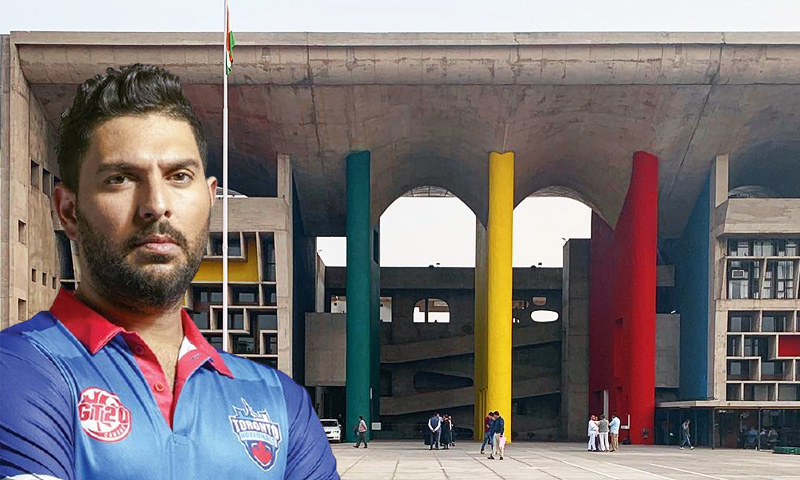 x
Court partly allowed his plea by quashing charges under Sections 153-A & 153-B of IPC.

Punjab and Haryana High Court has recently rejected the petition seeking quashing of FIR against the cricketer Yuvraj Singh, in Hansi, Haryana for using the word 'Bhangi' during an Instagram live.Singh was booked for alleged commission of offences under S.153A and S.153B of IPC and S.3(1)(u) of the Scheduled Castes and Scheduled Tribes (Prevention of Atrocities) Act, 1989. Justice...

Punjab and Haryana High Court has recently rejected the petition seeking quashing of FIR against the cricketer Yuvraj Singh, in Hansi, Haryana for using the word 'Bhangi' during an Instagram live.

Singh was booked for alleged commission of offences under S.153A and S.153B of IPC and S.3(1)(u) of the Scheduled Castes and Scheduled Tribes (Prevention of Atrocities) Act, 1989.

Justice Amol Rattan Singh observed that the offences punishable under Sections 153-A and 153-B of the IPC are not found to be committed by Singh even prima facie. However, regarding whether the offences under S.3(1)(u) and S.3(1)(s) of the SC&ST (Prevention of Atrocities Act), 1989 had been committed, it held that the investigation agency must complete its investigation and must come to its own conclusion.

The facts of the case are as follows: In April 2020, Yuvraj Singh and Rohit Sharma in a live chat on Instagram, referred to Yuzvendra Chahal and Kuldeep Yadav as Bhangi in a statement, "Yaar ye Bhangi log kuch nahin karte hain."

The Complainant who is an advocate and social activist saw the video and filed an FIR in Hansi district of Haryana avowing that since the petitioner is a famous cricketer loved by millions, usage of such a derogatory term has insulted the whole Dalit community. This was followed by the current petition seeking quashing the said FIR via exercising S.482 of CrPC.

Advocate Puneet Bali for the petitioner primarily submitted that neither the complainant (Respondent no. 2) had come to the Court with clean hands being a person known to file false cases against celebrities and nor did the complainant had any locus standi to register such an FIR. Asserting that his client was a victim of gross persecution and harassment, the counsel maintained that the filing of FIR because of such malicious intentions was an abuse of the process of law.

Stating that the word 'Bhangi' was not directed at the complainant or any member of the Dalit community, the Counsel asserted that this FIR had been filed to extract money from the petitioner and to exploit his celebrity status. The Counsel also gave a slapdash explanation of using the word Bhangi stating that the remarks made by the petitioner were meant for the inebriated state during which Yuzvendra Chahal made his father dance at a marriage ceremony and hence the comment (bhang – intoxicant) was a friendly remark directed at petitioner's friends and colleagues who are not a part of "respected Dalit community".

The counsel further submitted that neither the ingredients under S.153A and S153B of IPC had been met nor the essentials of S.3(1)(u) of the SC&ST (Prevention of Atrocities) Act, 1989 could be fulfilled to make out an offence. In addition to this, the Counsel emphasized that even the FIR did not aver that the petitioner had promoted enmity between different groups and neither was that the intention of the petitioner.

And the fact that petitioner released a public statement soon thereafter stating that "he does not disparage anyone on the basis of colour, caste, creed or gender and that he truly believes in the dignity of life and has respect for each individual without exception" and apologized for his remarks shows that the petitioner's intentions were not falsely placed and therefore, the Counsel stated that the FIR deserved to be quashed.

The first and foremost argument presented by the counsel for the respondent was that since the petition was still being investigated, the court could not quash the FIR and thus, the petition should not be entertained. Further, the counsel stated that since the respondent was a Dalit social activist belonging to the Scheduled caste community and the petitioner belonged to the Jat-Sikh community and the petitioner's statements were made on an online platform being heard by millions of his followers, the complainant did have locus standi in the case and that the petitioner had tried to increase enmity between different castes.

The counsel of respondent further referred to the Apex Court's judgment in Union of India v. the State of Maharashtra where it was observed by the apex court,

"to treat SCs & STs as persons who are prone to lodge false reports under the provisions of the Scheduled Castes and Scheduled Tribes Act for taking revenge or otherwise as monetary benefits made available to them in case of their being subjected to such offence would be against fundamental human equality. If presumed so, it would mean adding insult to injury, merely by the fact that person may misuse provisions cannot be a ground to treat class with doubt."

The Counsel further referred to the report filed by the DSP who was in charge of the SIT constituted by the Hansi SP to look into the matter, which stated that since the offences were cognizable and non-bailable in nature and being against the State and the petitioner had not joined the investigation till 15th March 2021, "therefore quashing of FIR at its initial stage would cause grave prejudice to the investigating agency."

The Counsel then referred to SP's response which stated that the context of the usage of the word had to be seen and not just the word in isolation and that since the Bhangi community was listed as a scheduled caste community under various official gazettes of Punjab, Haryana, Delhi and Himachal and the petitioner being a resident of Chandigarh would have been well-aware of the term and thus, his explanation that the word he used was to refer to Bhang did not suffice.

Thus, contending that the word Bhangi was clearly used in a humiliating, pejorative sense, and the matter was under investigation, the learned counsel requested that the FIR must not be quashed.

The High Court first looked at the petitioner's contention of District Police, Hansi not having any jurisdiction to file an FIR against the petitioner who was in Bombay. Referring to the Apex Court's judgment in Amish Devgan v. Union of India where the apex court had asserted that as per S.179 CrPC, an FIR could be filed wherever the cause of action ensued and thus if a conversation on a public platform had been heard by people in different places, cause of action could lie in different places.

The High Court then averred that since the conversation occurred on social media and could have been viewed anywhere in the world, on a conjoint reading of S.179 CrPC and S.156(1) CrPC, any person who was aggrieved by the conversation would have a right to institute a complaint about the same.

Then Court stated that since the complainant belonged to a scheduled caste and was aggrieved by the petitioner's words and since these facts were not denied by the Petitioner, the complainant was a victim as per S.2( e ) of the SC&ST Act, 1989.

Regarding the petitioner's contention that since the offence was not established, FIR should not have been registered, the High Court referred to the Apex Court's judgment in Lalita Kumar v. State of UP and Subhash Kashinath Mahajan v. State of Maharashtra where it was held that once a cognizable offence is made out, FIR must be outrightly registered without any pre-requisite of a preliminary inquiry. And the High Court clarified that since the investigation was ongoing and there was a prima facie case made out against the petitioner, the FIR could not be quashed.

Further moving to petitioner's argument that he used the word 'Bhangi' in the context of inebriated state, the Court referred to SP's affidavit and observed that since the word used normally for the inebriated state in north India is 'Nasherdi' and the word 'Bhangi' is actually used to notify Schedule Castes, the Court held that the offence under S.3(1)(u) and S.3(1)(s) had been made, however, the Court reserved its final comments on the same due to the pending investigation.

About Respondent's contention that the petitioner had tried to cause enmity between different castes and must be punished under S.153A and S.153B of IPC, the High Court referred to Supreme Court's judgments in State of Maharashtra v. Mayer Hans George and Manzar Sayeed Khan v. State of Maharashtra and Another, where it was held that mens rea is a crucial component of S.153A and S.153B, the Court held that the offences under S.153A and S.153B shall not be made out against the petitioner due to lack of any mens rea.

Thus, stating that though the intention of user of the word may not be so but if the result is to cause indignities/humiliation to any member of a scheduled caste then the intention becomes significant considering the objectives of the SC&ST (Prevention of Atrocities) Act, 1989, the Court partly allowed the petition seeking quashing of FIR, as offences under S.153A and S.153B of IPC were not made out but offences under SC&SC (Prevention of Atrocities) Act, 1989 shall still be investigated.