UAPA- Beyond Merely Asserting That Accused Are Involved In Terrorist Activities, No Materials To Connect Him: P&H High Court Grants Bail 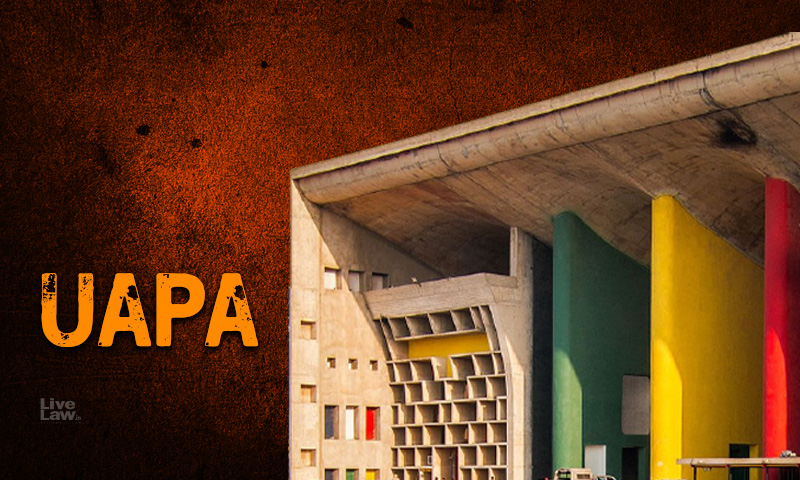 The Punjab & Haryana High Court on Tuesday granted bail to an accused booked under the Unlawful Activities (Prevention) Act while noting that though allegations against him are series, however, the same are not established in the charge sheet. Perusing the charge sheet filed by the State, the Bench of Justice Harinder Singh Sidhu opined: "Beyond merely asserting that the...

The Punjab & Haryana High Court on Tuesday granted bail to an accused booked under the Unlawful Activities (Prevention) Act while noting that though allegations against him are series, however, the same are not established in the charge sheet.

Perusing the charge sheet filed by the State, the Bench of Justice Harinder Singh Sidhu opined:

"Beyond merely asserting that the petitioner and the other accused are involved in terrorist activities, Ld. Counsel appearing for the State have not been able to point out any material collected during the investigation which would connect the petitioner with the accusations sought to be made and to indicate that the allegations against the petitioner regarding the offences under the Unlawful Activities (Prevention) Act, are prima facie true."

It may be noted that the allegations against the accused are that they have close links with anti-national elements operating from Pakistan and Western countries and that they were instructed by their handlers to destabilize the security and stability of India.

As per the prosecution's version, on receipt of secret information, one Gagandeep Singh, who is alleged to a gangster and wanted in a number of criminal cases was apprehended by a police party.

Several weapons, cash, fake ID, walky-talky and knives were recovered from him and during the investigation he allegedly disclosed that he along with his accomplices had robbed the IIFL Gold Finance Company Ltd. Ludhiana and looted 30 kg. gold.

In the report under Section 173 Cr.P.C. filed in Court, it is stated that Gurpal Singh (petitioner) was behind the gold robbery at Ludhiana.

Further, based only on the investigation and questioning of accused Gagandeep Singh @Judge, offences under Sections 15,17,18,18-B of the Unlawful Activities (Prevention) Act 1967 were registered and they also find place in the report under Section 173 Cr.P.C. submitted in Court.

It was alleged that during investigation and questioning of accused Gagandeep Singh it had been established that the said accused and his associates were operating a gang and were involved in anti-national activities like threatening citizens of the country committing robberies at financial institutions like banks, cash vans, and non-banking financial institutions.

Allegedly, they had procured illegal weapons and kidnapped people for ransom. They were instructed by their bosses living abroad.

Accused were stated to be frequently using a number to make calls among themselves in India to maintain secrecy from the police and other intelligence agencies. The police also wrote to the Australian High Commission for record/ information regarding said one Harman, with whom they allegedly used to speak.

It was alleged that they procured dangerous illegal weapons and also in touch with the infamous secret agency ISI of Pakistan through walky-talky sets and that the accused had planned to attack on Police stations or Police escort parties in order to get their companions released from police custody.

At the outset, the Court noted that the specific role of the petitioner in the activities allegedly attracting the offences under Unlawful Activities (Prevention) Act, 1967 is not forthcoming from the charge sheet.

"The foreign contacts are recorded in the mobile handset recovered from Gagandeep Singh (petitioner). How the petitioner is connected therewith is not forthcoming. It is also not the case of the prosecution that any of those contacts is involved in promoting anti-national activities," noted the Court.

Lastly, noting that the petitioner is in custody since May 29, 2020 and the investigation in the case is completed, challan has been filed against five of the accused and the sixth accused Jaipal is yet to be arrested, the Court directed his release on bail.