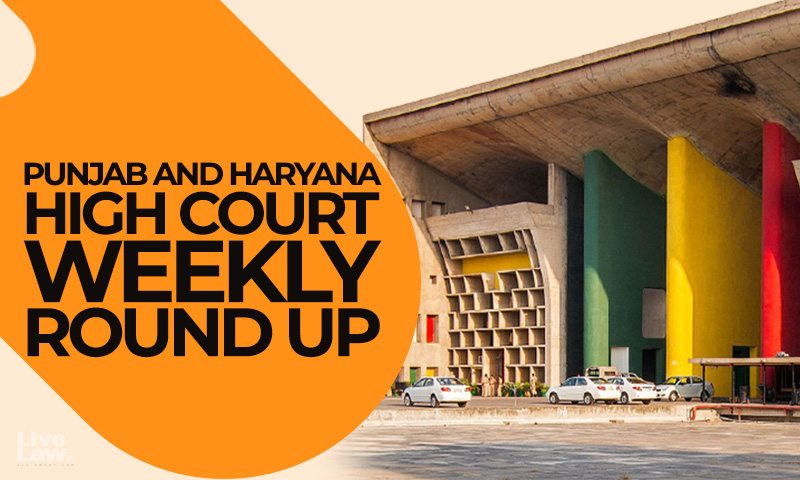 Pt. B.D. Sharma University of Health and Sciences v Kavita and others

Aman Lohan and others v. State of Haryana and others

Ramesh Razdan And Others v. State Of Haryana And Others and connected matters

Amandeep Kaur and another v. State of Punjab and others

Mohammad Asif v. Union of India and others

Paramjit Singh Saholi v. State of Haryana and others

Tejinder Pal Singh Bagga v. State Of Punjab And Another

Anil and another vs. State of Haryana

The Punjab and Haryana High Court has held that the plea of violation of principles of natural justice is not entitled to be accepted by the courts unless, it is shown in the facts and circumstances of a case that rights of a party have been prejudicially affected. Accordingly, it held that the rules of natural justice are not rigid and have to be applied keeping in view the fact situation of a particular case. A party claiming violation of the rule must show prejudice especially in a case where the facts are indisputable and only one conclusion is possible.

Case Title: Aman Lohan and others v. State of Haryana and others

The Punjab and Haryana High Court has ruled that heinous offenses such as attempt to murder punishable under 307 IPC is not compoundable between parties merely by stating that they have entered into a compromise and want to live in brotherhood, peace, and harmony. The Court further held that without the background of friendship, the closeness of family, strong bonds, or being in relations, the explanation that 'parties want to live in brotherhood, peace, and harmony' is meaningless to permit compounding of a heinous offense punishable under section 307 IPC.

The Punjab and Haryana High Court has made it clear that directions to take a voice sample of the accused do not infringe his/her rights under Article 20(3) of the Constitution of India. The court dismissed the petition, challenging the Lower Court's order which directed the Petitioner-accused to give his voice sample. It observed that the infringement of the fundamental right to privacy cannot be raised to create a bubble to scuttle the investigation.

The court while deciding the matter took into consideration the contention of the petitioner that the Trust sold the property to respondent No.2 in contravention of the object of the gift. This very relief along with Para 5-A was sought to be added in the plaint but could not be incorporated though they are material for the proper adjudication of the dispute. The court came to the conclusion that there is no merit in the afore-referred contentions because the relief originally claimed in the plaint and the relief sought to be added by amendment, are contradictory, the same is not permissible.

6. Rejected Claims By Resolution Professional In Insolvency Proceedings, To Be Decided By The Arbitrator: Delhi High Court

The Punjab and Haryana High Court recently quashed a FIR registered against the Petitioner-accused for allegedly causing hurt by dangerous weapons to the complainant-victim, which is a non-compoundable offence punishable under section 324 IPC, on the basis of a compromise between the parties. While dealing with the nature of the offense involved in the present case, the court held that the offense under section 324 IPC is non-compoundable under Section 320 of the Code of Criminal Procedure, 1973 (CrPC). However, without adjudicating this point, the prosecution qua the non-compoundable offences can be closed.

7. "Look Into Rehabilitation Of Displaced Kashmiri Pandits Who Suffered Due To Terrorism In J&K" : Punjab & Haryana HC To Haryana Govt

Case Title :Ramesh Razdan and Others v. State of Haryana And Others And Connected Matters

Asking the Haryana Government to look into the rehabilitation of Kashmiri Pandits, the Punjab and Haryana High Court on Tuesday directed it to include the names of displaced Kashmiri Pandits in a draw of lot for allotment of plots in Haryana's Bahadurgarh. Significantly, the Court directed the Haryana Government to have a relook at the entire issue, looking at the plight of those who have genuinely suffered loss of their homes at the hands of terrorists in Jammu & Kashmir more than 30 years ago and are continuing to suffer on account of no clear title to their homes. In the end, the Court made it clear that those who would be included in the draw of lots would be all such persons who applied for being so included and have been verified to be genuinely displaced Kashmiri Pandits.However, as regards the policy to be drawn up for the displaced Kashmiri Pandits who came to Haryana, the Court directed that it would be taken as a wholesome policy.

Case title - Amandeep Kaur and another v. State of Punjab and others

The Punjab and Haryana High Court dismissed a plea filed by a same-sex live-in couple seeking protection of their life and liberty on account of the fact that their family members are against their alliance and are extending threats to them that they would be falsely implicated in criminal cases. "Even, if it is assumed, that a complaint is given to the police by any of the private respondents against the petitioners, then it cannot be construed as a threat to their life and liberty, as private respondents are also free to avail their remedy in law in case, they feel that some offence has been committed," the Court further added.

Case title - Mohammad Asif v. Union of India and others

The Punjab and Haryana High Court has sought the affidavits of two high officials of the Union Ministry of Home Affairs in connection with the matter of a Pakistani National who is currently in judicial custody and has already spent 2 years 9 months in Central Jail, Amritsar including an overstay of 1 year 9 months. Significantly, the Court has issued this order on a Habeas Corpus plea moved by the Pakistani National, Mohammad Asif, who was awarded rigorous imprisonment for 1 year by the trial Court in April 2019 under Sections 3/34/20 of Indian Passport Act, 1920 read with Section 14 of Foreigner Act, 1946, however, he was not released after 1 year and hence, he has already undergone total imprisonment for about 02 years and 09 months to date.

The Punjab and Haryana High Court on Thursday upheld the move of the Haryana Government to release Dera Sacha Sauda chief Gurmeet Ram Rahim Singh on Furlough (for a period of three weeks from February 7 to February 27). Finding justification in the argument put forth by the counsel for the Haryana State, the Bench, at the outset, stressed that Gurmit Ram Rahim was granted furlough for 21 days and he had completed the same and has returned to the jail premises, therefore, at this stage, more or less, the writ petition had become infructuous. Further, holding that the respondent-State had rightly interpreted the import of Section 2(aa) of the Haryana Good Conduct Prisoner (Temporary Release) Amendment Act, 2013, the Court remarked thus:

"The Statute identifies an offence of murder simpliciter and not a conspiracy to murder or abetment thereof. The conviction of Gurmit Ram Rahim is not directly under Section 302 IPC, rather the same is with the aid of Section 120-B IPC. Had the intention of legislature been to include aiding offence under Section 120-B IPC for the purpose of defining hardcore prisoner, the language of Amendment Act of 2013 would have been different altogether. It has been excluded in the definition clause of hardcore prisoner. Cases of Section 120-B IPC are consciously excluded and the Legislature was very much alive to the situation, in which Section 120-B IPC has been excluded. The words used in an Act cannot be used or interpreted loosely and inappropriately, rather the same are to be given true meaning, importance and are to be correctly and exactly used."

Punjab and Haryana High Court on April 02, 2022, dismissed a petition wherein the petitioner approached the court for quashing of FIR under Sections 23, 3(1), 3A, 4, 5(2), 6(b) of the PreConception and Pre Natal-Diagnostic Techniques Act, Sections 120-B/34 of IPC and all subsequent proceedings. The court further noted that the bar as envisaged in Section 28 of the PNDT Act is a bar against taking cognizance by the Court wherein it is provided that it is only upon a complaint made by Appropriate Authority that a Court may take cognizance of an offense. The said bar cannot be extended to the proceedings pertaining to lodging of FIR, as any person can give information pertaining to the commission of a cognizable offense to the police. The offenses under the PNDT Act have been classified as 'cognizable' offenses without there being any exclusion clause ruling out police investigation as is there under provisions of section 45(1A) of PMLA and without there being any kind of rider defining a particular class of police officers only to be competent as is noticed in the proviso t Section 14(i) of Suppression of Immoral Traffic in Women and Girls Act, 1956.

12. Order Refusing To Appoint Local Commissioner Does Not Adjudicate Rights Of Parties, No Revision Lies Against It: Punjab & Haryana High Court

The Punjab and Haryana High Court has held that an order refusing to appoint a Local Commissioner does not decide any issue nor does it adjudicate any rights of the parties for the purpose of the suit and hence would not be a revisable order. The court relied on the cases of Pritam Singh v. Sunder Lal [1990(2) PLR 191] and held that appointing a commission is totally discretionary on the court.

13. Employee Appointed On Contractual Basis Without Public Advertisement Does Not Have "Right To Regularization": Punjab & Haryana High Court

The Punjab and Haryana High Court has granted relief to Bharatiya Janata Party (BJP) leader Tajinder Pal Singh Bagga in a case registered against him for his alleged criminal intimidating statement against the Chief Minister of Delhi, Arvind Kejriwal. Noting that the offences listed in the FIR are all punishable with imprisonment of less than seven years, the Bench of Justice Harinder Singh Sidhu directed the Punjab State Government to strictly adhere to the directions of the Supreme Court in the case of Arnesh Kumar vs. State of Bihar and another, 2014(8) SCC 273.

15. Parameters Laid Down In 'Dharampal Case' For Suspension Of Sentence Are Only Guidelines, Not Invariable Rule: PH High Court

Case title - Anil and another vs. State of Haryana

The Punjab and Haryana High Court has observed that the parameters laid down by the High Court in the Dharampal case [Dharampal vs. the State of Haryana, 1999 (4) RCR (Criminal) 600] for suspension of the sentence are only guidelines, and the same are not to be taken as an invariable rule. The The bench observed thus:

The Punjab and Haryana High Court recently observed that if the wife is bent upon destroying the career and reputation of her husband by making complaints against him to his senior officers, then it would amount to mental cruelty and the same would entitle the man to divorce. Consequently, the Court granted a decree of divorce and allowed the plea while noting that the marriage between the parties had broken down irretrievably and there is no chance of their coming together or living together again.