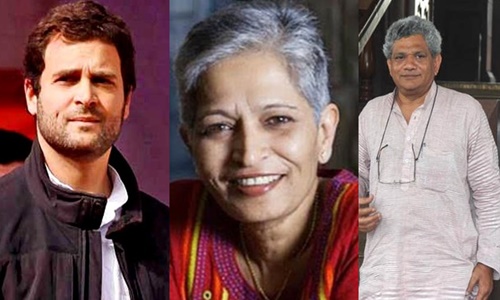 RSS worker and lawyer Dhrutiman Joshi had filed a private complaint in the court in 2017 against Rahul Gandhi, UPA chairperson Sonia Gandhi, the CPI (M) and its general secretary Yechury.

"Upon perusal of materials placed before this Court, I find that the statements are defamatory in nature. The accused no.1(Gandhi) and 2(Yechury) have no right to make such statements without verifying the facts. No investigating agency can conclude that RSS party or its followers were involved in the alleged murder of journalist Gouri Lankesh", said the Magistrate.

However, the complaint against Sonia Gandhi was dismissed under Section 203 of Code of Criminal Procedure, observing that party president (as she was then) cannot be held liable for statements of Rahul Gandhi.

The matter was set for further hearing on March 25.

Lankesh was shot dead outside her house in Bengaluru in September 2017, allegedly by the members of a right-wing extremist group.

Yechury too stated that it was the RSS' ideology and the RSS men who had killed the journalist known for her trenchant criticism of right-wing politics, he alleged.

The complainant Joshi claimed that these statements slandered the Rashtriya Swayamsevak Sangh (RSS), and therefore a case of criminal defamation under IPC section 500 be registered against Rahul Gandhi, Yechury, CPI(M) and Sonia Gandhi.

Rahul Gandhi is already facing another case for defamation, filed by a Bhiwandi-based RSS worker, for allegedly blaming the Sangh for Mahatma Gandhi's assassination.