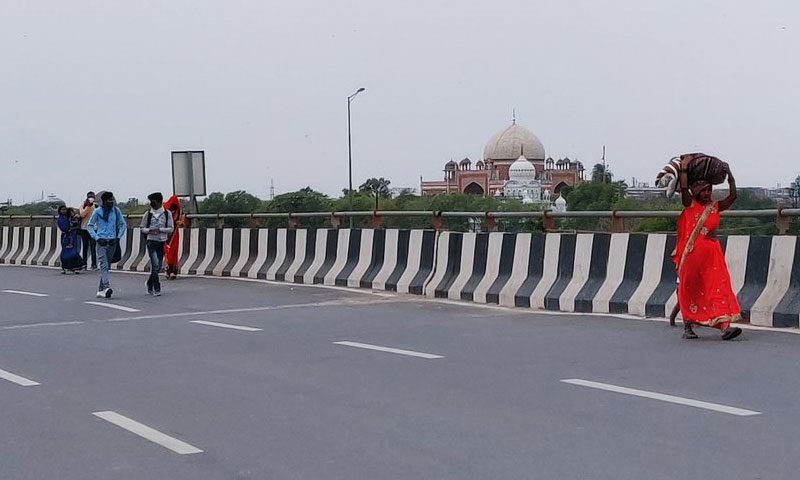 The Rajasthan High Court on Tuesday issued notice to the State government and directed them to file a status report regarding measures taken by the government to ensure that the interest and welfare of migrant daily wage workers is safeguarded. On 28.03.2020, a letter was written to the Chief Justice of Rajasthan High Court by advocates James Bedi and Sommya Chaturvedi requesting the Court...

The Rajasthan High Court on Tuesday issued notice to the State government and directed them to file a status report regarding measures taken by the government to ensure that the interest and welfare of migrant daily wage workers is safeguarded.

On 28.03.2020, a letter was written to the Chief Justice of Rajasthan High Court by advocates James Bedi and Sommya Chaturvedi requesting the Court to take cognizance of the welfare of daily wage workers who found themselves stuck near the State border after the nationwide lockdown was announced due to COVID-19 outbreak. The letter narrated the prevailing situation wherein State governments directed authorities to seize the borders and discontinued all modes of public transport pursuant to the Prime Minister's call for a 21 day lockdown on 24.03.2020. This has caused a great deal of hardship to workers who are natives of Rajasthan working in other states as well as those who worked in Rajasthan but came from neighbouring states. Further alluding to the harsh conditions faced by the workers, the letter details how, due to the lack of earning opportunities, these workers are left without basic essentials like food and shelter for survival and are left with no option but to go back to their native places, and that too on foot since no other mode of transport is available.

"There is a continuous movement of such workers daily across state borders. Consequently, hundreds of labourers and their family members including women and children are commuting to Rajasthan through state borders from different states such as Gujarat, Haryana, Uttar Pradesh, Madhya Pradesh.", the lawyers said in the letter.

Furthermore, the lawyers enunciated that these hardships were being faced by the workers without any assistance or facilities being provided by the authorities. Concerns were also raised about such movement, coupled with the inaction of authorities, resulting in increased spread of the corona virus and consequent loss of lives. In this light, the letter sought urgent intervention of the Court to direct the government of Rajasthan to take appropriate measures for the rehabilitation, food and sanitation of the daily wage workers who are moving across the territorial borders of the State.

"In these grave circumstances, the Hon'ble high court being the protector and guardian of rights of the people, may kindly be pleased to take cognizance and issue direction to concerned authorities and to pass orders to isolate these daily wages workers, provide transportation and basis facility such as food."

Treating this letter as a Public Interest Litigation (PIL), the High Court conducted an urgent hearing regarding the same through audio conferencing. Advocate James Bedi appeared before the Bench comprising of Justices G R Moolchandani and Narendra Singh Dhaddha and submitted that workers continued to suffer as no arrangements regarding transport, food and shelter had been made.

Recording the same, the Court sought a reply from the government and asked for a status report to be put on record. However, the Court went on to observe that, according to reports received by them, the State government had taken appropriate steps to safeguard the welfare of the workers.

"Though we have seen and have come across to several news / video items, which goes to show that the respondents have taken care of this aspect and enough has been done to provide food, shelter and transportation to such migrants, who are obviously under fear and panic, which is unwarranted."

This matter will again come up for consideration now on April 7, at 11.45 am.