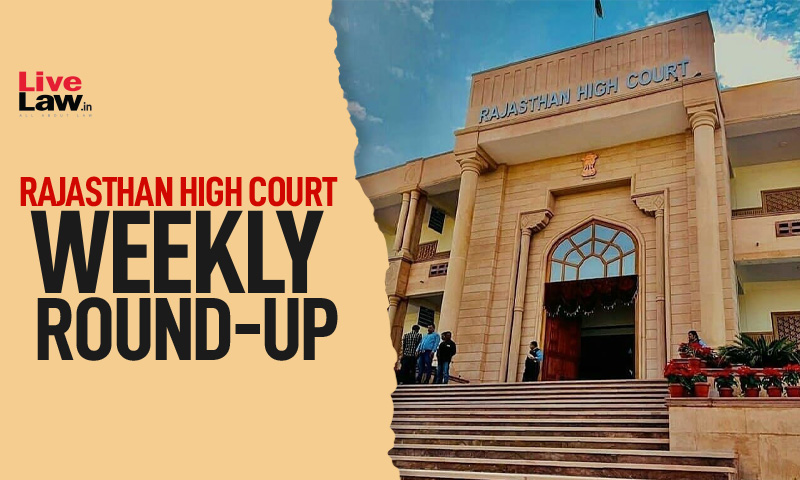 The Rajasthan High Court recently commuted death sentence awarded to a man convicted for the offence of sodomy, rape and murder of a 7-year old girl child, while observing that it appeared to be a case of wrong conviction whereby the actual offenders had, with the help of the Police, shifted the crime on the present convict.

The case had travelled up to the Supreme Court which did not upset the conviction and had remitted the matter back to the High Court only to decide the question of sentence upon consideration of aggravating and mitigating circumstances.

While dealing with this criminal death reference, a division bench of Justices Pankaj Bhandari and Anoop Kumar Dhand observed,

" It appears that two persons committed the horrendous act of rape and sodomy with a seven ones year old girl and murdered the girl and thereafter, with the help of the police shifted the crime to the present appellant...We are alive of the fact that the conviction of the accused has been upheld by the Apex Court...Since we have been directed to confine our judgment only on the question of sentence for offence under Section 302 IPC, we with heavy heart and with hope that justice would be done to the accused, who has been sentenced to imprisonment till death for crime committed by two other persons, commute sentence from death penalty to life imprisonment."

The Rajasthan High Court has granted bail to a woman, accused in a murder case, who has been incarcerated since June 2015, along with her minor daughter.

While observing that the trial is still pending and on being informed that the same is held up on account of delay caused by witnesses, Justice Manoj Kumar Garg allowed her second bail application.

Essentially, the lady has been in judicial custody since June 2, 2015 in connection with an FIR registered at Police Station Kuri Bhagtasni, Jodhpur for the offences punishable under Sections 302 (Murder), 120-B (Criminal conspiracy) and 201 (Causing disappearance of evidence of offence) of the IPC and Section 4/25 of the Arms Act.

Notably, her first bail application was dismissed on 15.12.2016 by the court.

"Having regard to the totality of the facts and circumstances of the case and considering the facts that the accused-petitioner is a lady and she is inside jail since 02.06.2015 along with her minor daughter aged about three years and the trial of the case is yet pending, therefore, without expressing any opinion on the merits of the case, I deem it just and proper to grant bail to the accused petitioner under Section 439 Cr.P.C," the Court said.

The Rajasthan High Court has observed that Section 18A of Drugs and Cosmetics Act, 1940 requires disclosure of name of manufacturer also and not only of the stockists and thus, he is entitled to receive one portion sample of seized drugs in terms of Section 23(4) of the Act.

Section 18A of the Act deals with the disclosure of the name of the manufacturer, etc. It states, "Every person, not being the manufacturer of a drug or cosmetic or his agent for the distribution thereof, shall, if so required, disclose to the Inspector the name, address and other particulars of the person from whom he acquired the drug or cosmetic.".

Section 23(4) r/e 23(3) provides that where an Inspector takes a sample of a drug for the purpose of test or analysis, he shall divide the sample into four portions and restore one portion of it to the person from whom he takes it, and shall retain the remainder.

The High Court of Rajasthan has held that proceedings under the A&C Act and SARFAESI Act can be resorted to simultaneously.

The Single Bench of Justice Mahendra Kumar Goyal has held that the existence of an arbitration clause and filing of an application under Section 9 of the A&C Act is not a bar to the institution of proceedings under the SARFAESI Act.

The writ petitioner challenged that order of the Chief Metropolitan Magistrate, Jaipur passed under Section 14 of the SARFAESI Act on the ground that the loan agreement between the parties contains an arbitration clause and the respondent having filed an application under Section 9 of the A&C Act, therefore, the remedy under SARFAESI Act cannot be resorted to and the CMM erred in entertaining the application.

The petitioner/department has pleaded that the company M/s. Punsumi India Ltd. is under liquidation and the Officer Liquidator (OL) had invited claims with regard to outstanding dues against the company. The department had sent its claim via communication and the OL communicated that the claim was not in the prescribed format and the same was time barred and delay was to be condoned by the High Court.

The department submitted its claim before the OL with the documentary evidence and affidavit, and the OL called for certain information from the department, which was responded to by them.

The Supreme Court Collegium has recommended the name of Justice S. S. Shinde as the new Chief Justice of the Rajasthan High Court. Presently, Justice Shinde is serving as a Judge of the Bombay High Court.

He obtained LL.M Degrees from Pune University, and from Warwick University, United Kingdom. He enrolled on 9th April 1987 as an Advocate on the Roll of the Bar Council of Maharashtra & Goa, and started practice as an advocate in the High Court of Bombay, Bench at Aurangabad in November 1989.

The court has directed the Investigation Officer to remain present with case diary and CCTV Footage of the incident (if any) on the next date of hearing.

"Having regard to the facts and circumstances of the case, the Investigating Officer is directed to remain present with case diary and CCTV Footage of the incident (if any) on 23.05.2022. The matter shall be taken up at 11.00 a.m. on 23.05.2022. Till then, the petitioners shall not be arrested in connection with FIR No.127/2022, P.S. Sardarpura, Jodhpur."

The Rajasthan High Court has issued notice on a public interest litigation challenging the validity of frequent "Internet Shutdown" orders being passed by the Divisional Commissioner of the area.

It is alleged that since the Supreme Court's orders in Anuradha Bhasin v. Union of India, which held that internet shutdowns should be resorted to only in exceptional circumstances, at least 26 shutdown orders restricting internet access for around 506 hours in the Udaipur Division have been issued.

The public interest litigation has been filed by Udaipur Chamber of Commerce and Industry as well as Hotel Association, Udaipur. It seeks a direction to the State to immediately publish all orders suspending internet services on its official websites as well as Twitter Handle i.e. @RajGovOfficial.

The Rajasthan High Court has granted interim relief from arrest to news anchor Arnab Goswami in an FIR registered against him based on the complaint by Congress Spokesperson Pawan Khera taking objections regarding broadcast of certain news on Republic Bharat regarding alleged temple demolition in Rajgarh.

Essentially, the FIR was registered at Ambamata Police Station, Udaipur on 17.05.2022 against Arnab Goswami along with other persons of Republic Bharat under Sections 153A, 295A, 120B, 499, 501, 504 & 505 of the Indian Penal Code and other relevant sections of Information Technology Act, 200 read with N.S.A. Act. The FIR was registered pursuant to the news reporting conducted by Republic Bharat with regards to demolition of temple at Rajasthan. In this regard, Arnab Goswami has moved to the High Court seeking quashing of the aforesaid FIR.