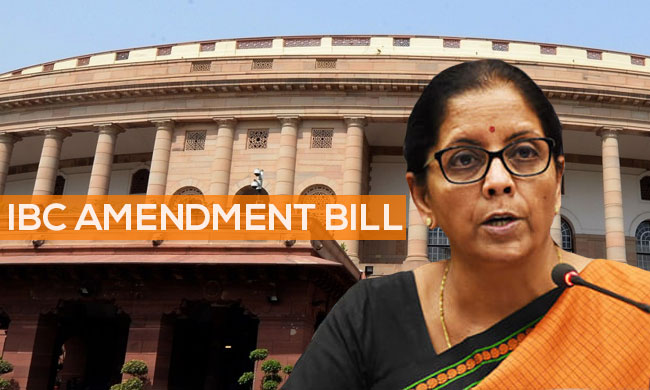 The Rajya Sabha today passed the Insolvency and Bankruptcy Code (Second Amendment) Bill, 2020, by voice vote. The Bill, already in force as an Ordinance, seeks to amend the IBC Code 2016 and temporarily suspend initiation of the Corporate Insolvency Resolution Process (CIRP), for a period of one year. While introducing the Bill, Finance Minister Nirmala Sitharaman explained that...

The Bill, already in force as an Ordinance, seeks to amend the IBC Code 2016 and temporarily suspend initiation of the Corporate Insolvency Resolution Process (CIRP), for a period of one year.

While introducing the Bill, Finance Minister Nirmala Sitharaman explained that the Bill shall temporarily suspend initiation of corporate insolvency resolution process for a period not exceeding one year, from March 25, 2020, to ease the financial stress being faced by companies during the extraordinary economic situation caused by the COVID-19 pandemic.

Though the Bill was supported by many Members, they expressed concern that it offers blanket protection, even to wilful defaulters. Congress MP Vivek Tankha said that the Bill will enable the companies, that were already under defaulting category, to use the Bill as a shield. He asked the Government to clarify if it was protecting only such companies affected by Covid-19 during this period, or all of them.

Responding to this, BJP MP Arun Singh expressed the difficulty in distinguishing Covid-19 companies as all services across the world had been stopped.

Some Members also said that the Bill is preventing voluntary Corporate Debtors from filing for bankruptcy. BJD MP Dr. Amar Patnaik pointed out that until June 2020, as many as 260 CIRP were initiated by Corporate Debtors themselves but they were prevented from proceeding due to the Bill.

Another concern raised by the Members was that when the stay on CIRP ends, there will be a sudden rush with the IBC Board resulting in erosion of capital value.

DMK MP P. Wilson welcomed the Bill but said that it discriminates between Corporates and the common man. He asked the Government why it had not offered similar treatment to individuals, proprietorship entities & partnership firms under Section 3 of IBC. He sought the Government to waive of the interest rates on home loans, vehicle loans, agricultural loans and credit cards.

Speaking on the occasion, NCP MP Praful Patel asked the Government to work upon creating more NCLT Benches and fill up the vacancies. He also stressed that Resolution Professionals appointed under the Code must are not fully equipped and must be trained.

Prohibition on the initiation of CIRP

The Bill restricts initiation of CIRP, voluntary or by the creditors, for defaults that arose during the six months from March 25, 2020. This period may however be extended by the Central Government to one year, through notification.

An Explanation appended to Section 10A of the Bill clarifies that during this period, CIRP can still be initiated for any defaults arising before March 25, 2020.

The Bill prohibits the Resolution Professional from filing an application before the NCLT to contribute personal assets of the director or a partner of the corporate debtor to the company assets.

[Under normal circumstances, a director or a partner of the corporate debtor may be held liable to make personal contributions if despite knowing that the insolvency proceedings cannot be avoided, he did not exercise due diligence in minimising the potential loss to the creditors]