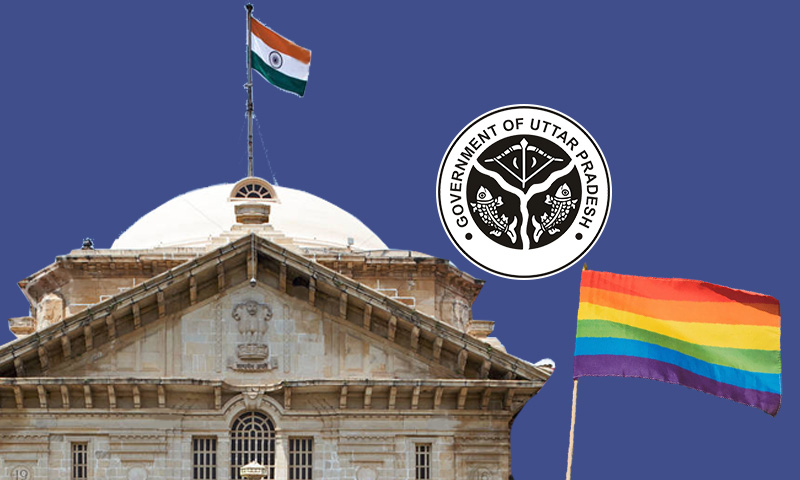 The Uttar Pradesh Government last week opposed the recognition of same-sex marriage on the ground that such marriages are against Indian culture and Indic religions and shall be invalid according to Indian laws, which have been designed keeping in mind the concept/existence of a man and a woman.The submission was made before the Bench of Justice Shekhar Kumar Yadav which was hearing a...

The Uttar Pradesh Government last week opposed the recognition of same-sex marriage on the ground that such marriages are against Indian culture and Indic religions and shall be invalid according to Indian laws, which have been designed keeping in mind the concept/existence of a man and a woman.

The submission was made before the Bench of Justice Shekhar Kumar Yadav which was hearing a Habeas Corpus plea filed by a mother seeking custody of her daughter (23 year old) alleging that she had been illegally detained by another woman, 22-year-old Sanjana (opposite party no. 4).

The background  of the case

Essentially, on the mother's plea, the Court, on April 6, 2022, issued an order wherein the corpus and opposite party no. 4 were directed the be produced before the Court.

On April 7, 2022, they both came to the Court and submitted that they are major and are in love, and have entered into a same-sex marriage with mutual consent. In this regard, they also showed a matrimonial contract letter to the court.

Further, they prayed before the Court that since they are adults and have entered into a homosexual marriage, therefore, such marriage should be recognized by the court.

It was their specific submission that Supreme Court has decriminalized all consensual sex among adults, including homosexual sex in its ruling in the case of Navtej Singh Johar & Ors. v. Union of India thr. Secretary Ministry of Law and Justice AIR 2018 SC 4321. They also argued that though the Hindu Marriage Act talks about the marriage of two people, homosexual marriage has not been opposed by the legislation.

Submissions made by the State of UP

The Additional Government Advocates opposed the prayer of the girls on the ground that our country runs according to the Indian culture, religions, and Indian law and in India, marriage is considered to be a sacred samskara, whereas, in other countries, marriage is a contract.

Referring to the Hindu Marriage Act, the AGAs further submitted that it talks about marriage between a woman and a man and in the absence of either of them, marriage cannot be accepted in any way, as it would be beyond the Indian family concept.

The State of UP further submitted that according to the Indian Sanatan Vidhi, in total 16 types of rituals are there including the rituals ranging from pregnancy to funeral rites and in all 16 rituals, a man and a woman have a definitive role to play and in their absence, such rituals can't be completed.

"As per the Indian law and culture, a biological husband and biological wife have been said to be essential for marriage and only their marriage has been recognized. In their absence, homosexual marriage cannot be recognized as it lacks male and female, and neither can they produce children. Marriage is considered important in Hindu law, under which both men and women live together and carry forward the human chain by producing children," it was further submittied.

Considering the same, the Court, rejected the request of the Corpus to recognise her same-sex marriage and the habeas corpus plea was accordingly disposed of.

Case title - Kumari Neha Chandra Vs. State Of U.P. And 3 Others