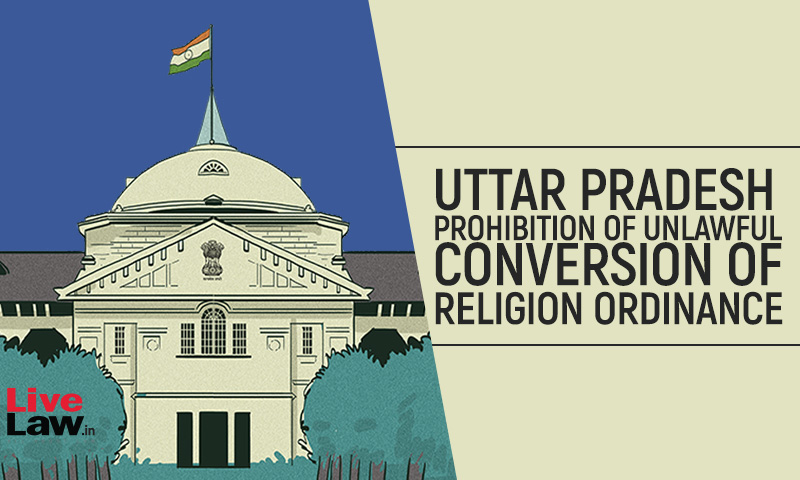 Stressing that there is no place for religious fanaticism, greed, and fear in our country, the Allahabad High Court recently observed that if a person from the majority community converts his/her religion after getting insulted, then the Country becomes weak and the destructive powers source benefits from it. The Bench of Justice Shekhar Kumar Yadav was dealing with the Bail plea of...

Stressing that there is no place for religious fanaticism, greed, and fear in our country, the Allahabad High Court recently observed that if a person from the majority community converts his/her religion after getting insulted, then the Country becomes weak and the destructive powers source benefits from it.

The Bench of Justice Shekhar Kumar Yadav was dealing with the Bail plea of one Javed who has been accused of unlawfully converting a Hindu girl to Islam, fraudulently for the purpose of her marriage with the accused.

At the outset, the Court noted that every adult citizen of the country is free to convert his/her religion and can marry any adult citizen and that there is no hindrance in the law of any kind in this regard.

However, the Court further observed:

"Everyone has a right to freedom under our Indian Constitution. Sometimes it also happens that people do not convert to another religion out of fear or greed, but due to humiliation, as they believe that they will get respect in other religions. There is no harm in this, and in the Indian Constitution, all citizens have the right to live life with dignity. When a person does not get respect in his/her own house and he/she is neglected, then he/she leaves the house."

"As the history of the past tells that when we (the people of India) were divided, the country was invaded and we became slaves. Dr. Bhim Rao Ambedkar, the architect of the Indian Constitution, is a good example of this, who suffered a lot of humiliation in his early life and that is why he converted his religion."

As per the prosecution's case, the victim had gone to Jalesar market on 17th November 2020 and from there she was picked up, administered some poisonous substance, as a result of which, she lost her consciousness and she was abducted and taken to Delhi.

The next day, when she regained her consciousness, she found herself in the Karkardooma court (Delhi) wherein she was asked to sign a couple of documents.

The victim gave the statement in front of the magistrate that she was made to sign on a blank paper and on a paper written in Urdu and later on, she got to know that the bail applicant was already married.

It was alleged by the prosecution that the girl was unlawfully converted for the sole purpose of getting her married to the bail applicant and that it was against the will of the girl and no notice was given to the DM as is mandatory under the UP Prohibition of Unlawful Conversion Act.

On the other hand, the petitioner said that both the parties are adults and the girl changed her religion on her own free will and got married to him. It was also submitted that the religion was converted even before the UP Conversion Law came into force.

Looking into the facts of the case, the Court noted that it was clear that the conversion of the Girl had been done for the sole purpose of her marriage and that too, against her will.

The Court also noted that in the present case, the victim had said that the applicant/accused lied to her that he had a relationship with other girls also and that she was made to sign her on plain paper and some papers were in Urdu and that she doesn't know how to read Urdu.

Denying him bail, Justice Yadav noted the submission of the prosecution that:

"…the applicant/accused is not entitled to bail and the bail application is liable to be rejected. Failure to do so will give strength to those religious contractors of the society who convert the poor and women wrongly by giving them fear, temptation. Nowadays, many such cases are being seen in the TV and newspapers, wherein poor, helpless, dumb, deaf women etc. are brainwashed. The saddest thing is that such people are encouraged and funded from abroad, just to weaken the country."

"The accused was already married and he first got the victim converted unlawfully and after that, made her sign on the Urdu papers, prepared a fake Nikah Nama and got married to her, and thereafter, he mentally, physically abused her. On getting the opportunity, the victim called the police and gave a statement against the accused before the magistrate which cannot be ignored."

In view of the above circumstances, the applicant/accused was found to be not entitled to bail and his bail application was thus, rejected.