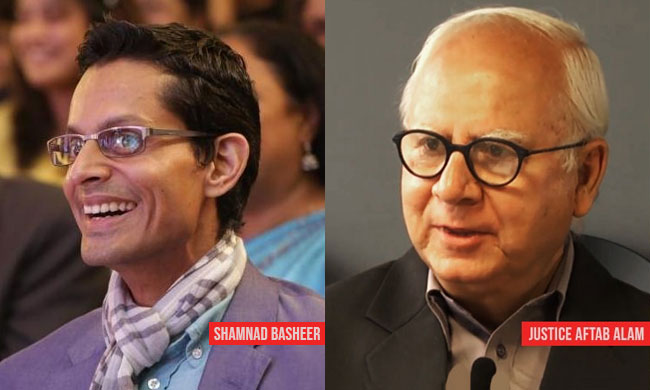 x
Justice Aftab Alam, a former judge of the Supreme Court, who presided over the landmark Novartis Glivec patent case in 2013, recollects the time Professor Basheer addressed his court
Your free access to Live Law has expired
To read the article, get a premium account.

I knew Shamnad more by his reputation, hearing from others about his brilliance and steadfast convictions. I had not met him then.

My first encounter with him was at the hearing of the Novartis case at the Supreme Court. During the course of the long hearing, I could see someone sitting in the second row along with Gopal Sankaranarayanan, now a senior advocate, intently watching the court proceedings. At that time, I did not know Shamnad by face and had only vaguely heard about him as a graduate of the national law school, deeply interested in the law of patents. I didn't pay much attention to the young man sitting in court, until at one stage in the proceedings he came up to the lectern, introduced himself as Professor Basheer (I was then able to place him), and said that he did not represent any of the parties in the case.

Nonetheless, having regard to the great importance of the matter and the far-reaching consequences the decision of the court was likely to have on issues of public health in the country, he said he would very much like to address the court. We agreed to hear him more as an indulgence to the apparent earnestness of a young man. But we soon realised that he was giving us valuable inputs more in the nature of an amicus and as someone quite disinterested in the result of the case from a material point of view.

It was clear that he passionately believed in what he considered to be the correct and honest contours of the law of patents and he expressed his views with great facility of expression. I have seldom come across such passion, combined with such ability and competence.

Later on, I continued to hear about his works and his achievements as a teacher and scholar. I came to know that he had set up an organization to help and prepare children from less privileged backgrounds for admission into the national law schools with a view to alter the class composition of the law schools and to make them more egalitarian. I was also aware that he managed to do all of this while battling some undiagnosed ailment, which caused him much physical pain.

Last March he wrote to me to say that he was now a visiting professor at the University of Pennsylvania Law School and that he was organizing a workshop on IPR for a group of senior law students and professors visiting India. On his invitation, I attended the workshop and found him at his intellectual best there.

Last evening I heard the shocking news of his passing. It was no time for him to die. He was one of the best that the National Law School has produced. The world of legal research, law teaching and genuine legal activism is much poorer by his demise.

This article is fist published in India Business Law Journal. You can read it here