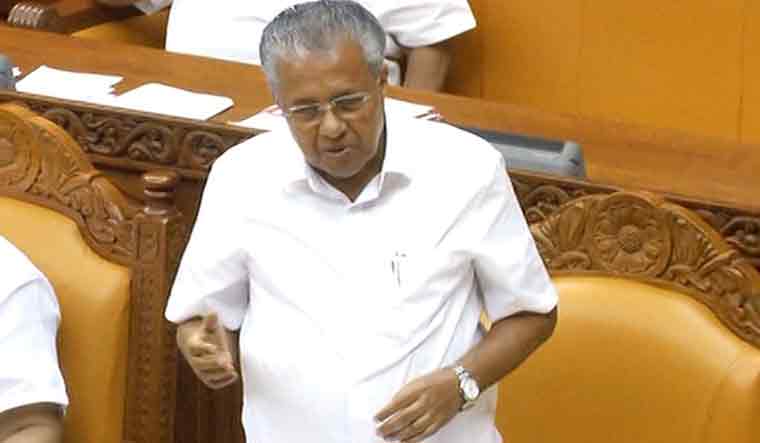 The Kerala legislative assembly passed a unanimous resolution on Thursday urging the Central Government to take urgent steps to repeal the three contentious farm laws, against which several groups of farmers are holding protests.

Though the lone BJP MLA in the 140-member house, O Rajagopal, orally opposed certain remarks in the resolution brought by the left front government during the discussion, he abstained from voting.

The resolution tabled by Chief Minister Pinarayi Vijayan stated that agriculture markets are state subjects as per item 28(Markets and Fairs) in the second list of seventh schedule of the Constitution.

"Since it is a matter directly affecting the States, the Central Government ought to have taken steps for inter-state discussions before the passing of the laws. It is a matter of serious concern that the laws were hastily passed without even sending them for the consideration of the standing committee of the Parliament", the resolution read.

The resolution highlighted that the protesting farmers apprehend that the three laws will affect the Minimum Support Price(MSP) system. Taking note of the steep price fall of agricultural products and the rising farmers suicides, the Central Government ought to take steps to assure MSP for products.

The resolution further states that the laws weaken the collective bargaining power of farmers before large corporates. The laws do not provide adequate provisions to protect farmers, who lack the capacity to wage legal battles against corporates.

The resolution points out that 32 farmers have lost their lives during the last 35 days of protests. Since India is holding the second position globally in terms of COVID-19 cases, the Centre ought to have refrained from making laws which invite public protests. The protests are fuelled by the massive fall in agriculture prices during COVID-19.

The resolution also expresses the apprehension that the continuation of the protests will affect the supplies to Kerala, which is predominantly a consumer state.

Further, the resolution raises the apprehension that the removal of pulses and cereals from the ambit of Essential Commodities Act will affect food security and will lead to hoarding and blackmarketing.

It is also highlighted that Kerala is a state which has successfully implemented land reforms and has made commendable moves to resolve agrarian crisis through local bodies and cooperative movements.

Last week, Kerala Governor Arif Muahmmed Khan had refused to give assent to convene a special assembly session on December 24 for discussing the resolution against farm laws. The Governor then said that there was no emergency situation warranting the special session. This was strongly flayed by the Chief Minister Pinarayi Vijayan, who shot off a letter saying that the Governor was abusing his discretionary powers by withholding assent. Following that, the Governor agreed to give assent for the special session today.

Your Ministers, Sir, Are Not Just Your Instruments of Government

Last year, on the same day, the Kerala assembly had passed a resolution demanding the repeal of the Citizenship Amendment Act, which was termed as a law against" the principles of Secularism and Equality doctrine, which are parts of basic structure of the Constitution of India".

Thousands of farmers, mostly from Punjab, have been camping near Delhi borders since November 26 demanding the withdrawal of three laws. The Supreme Court is seized of a batch of petitions which challenge the constitutionality of these laws. The top court is also considering another set of petitions which seek the removal of protesting farmers from Delhi borders. While considering those pleas, a bench led by the CJI observed that the farmers have the right to continue protests in a peaceful manner. The top court also said that it was thinking of constituting an independent committee to hold negotiations between the protesters and the government to resolve the statalemate. The CJI also suggested to the Attorney General that the Central Government could think of withholding the implementation of these contentious laws to facilitate talks.