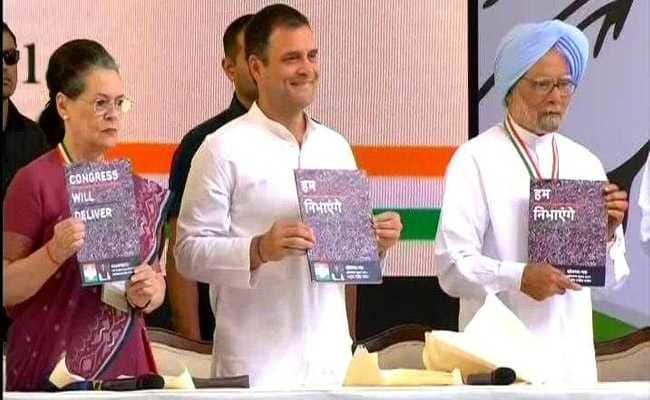 The Election Manifesto of the Indian National Congress titled "We will deliver" promises major legal reforms. Some of the highlights are :

SC as Constitutional Court; Establishment of Court of Appeals

It promises to amend the Constitution to make the Supreme Court a Constitutional Court that will hear and decide cases involving the interpretation of the Constitution and other cases of legal significance or national importance. It also promises to establish a Court of Appeal between the High Courts and the Supreme Court, to hear appeals from judgments and orders of High Courts. The Court of Appeal will sit in multiple Benches of 3 judges each in 6 locations.

Retirement age of HC judges to be raised as 65 years

Congress promises to fix the retirement age of judges of High Courts and the Supreme Court at 65 years. The retirement age for judicial members in Commissions and Tribunals shall also be 65 years

The NJC will comprise members judges, jurists and parliamentarians  and will endeavour to fill vacancies in constitutional courts within 2 months.

This commission will investigate complaints of misconduct against judges and recommend suitable action to Parliament.

It promises to pass the Constitution (Amendment) Bill to provide for reservation of 33 per cent of seats in the Lok Sabha and State Legislative Assemblies in the first session of the 17th Lok Sabha and in the Rajya Sabha. There is a further promise to amend the Service Rules to reserve for women 33 per cent of appointments to posts in the Central Government.

Repeal of Sedition and Criminal Defamation

It promises to decriminalise laws that are essentially laws directed against civil violations and can be subjected to civil penalties.

Section 499 of Indian Penal Code dealing with criminal defamation and Section 124A dealing with sedition will be omitted.

Congress promises to pass an Anti-Discrimination Law to prohibit discrimination on the basis of religion, caste, gender or language in the supply of goods and services that are made available to the public in general such as housing, hostels, hotels, clubs, et

AFSPA to be amended

It promises to amend Armed Forces (Special Powers) Act, 1958 in order to strike a balance between the powers of security forces and the human rights of citizens and to remove immunity for enforced disappearance, sexual violence and torture.

Prevention of Torture Act will be brought to prohibit the use of third-degree methods during custody or interrogation and punish cases of torture, brutality or other police excesses;

Bail the rule; Jail the exception

Code of Criminal Procedure and related laws will be amended to affirm the principle that 'Bail is the rule and jail is the exception:'

The party promised to :

a. Release immediately all remand and under trial prisoners facing charges punishable with imprisonment of 3 years or less who have spent 3 months in prison;

b. Release immediately all remand and under trial prisoners facing charges punishable with imprisonment of 3 to 7 years who have spent 6 months in prison; and

c. Institute comprehensive prison reforms recognizing the principle that prisoners enjoy human and legal rights and that prisons are institutions of correction.

Digital rights of every citizen

The party holds out the promise to provide every citizen high speed internet at affordable rates and to uphold the principle of net neutrality to ensure the internet stays a level playing field. It assures to regulate the power to shut down the internet and to prevent arbitrary shut downs and to promote the development and use of open standards and free and open source software in order to enable citizens to avail of government services and access government information without being obliged to rely on proprietary software.

It undertakes to pass a law to protect the personal data of all persons and uphold the right to privacy, and to check surveillance and monitoring.

Electoral bond scheme will be abolished. It will ensure that EVMs and VVPATs are tamper proof and that at least 50% VVPAT will be verified.

It promised to bring 33% reservation for women in police force.

It promises measures to ensure that media remains 'free and unregulated'. Press Council of India Act will be amended to "strengthen the system of self-regulation, protect the freedom of journalists, uphold editorial independence and guard against government interference".

It will will pass a law to curb monopolies in the media, cross-ownership of different segments of the media and control of the media by other business organisations. Congress will refer cases of suspected monopolies to the Competition Commission of India.

Congress promises to amend the Cinematograph Act to restrict censorship of films to grounds of national security and obscenity. It will direct the Central Board of Film Certification to certify films according to transparent and reasonable criteria.

It promises to pass a law to restore the original purpose and intent of the 200-point roster system and implement it for the institution as a whole. It also promises to amend the Constitution to provide for reservation in promotion posts for SCs, STs and OBCs.

It promises to withdraw the contentious citizenship amendment bill.