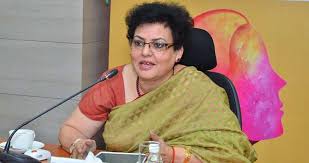 Activist Saket S Gokhale has filed a civil writ petition before the Bombay High Court praying for directions to the Ministry of Women & Child Development to remove Ms. Rekha Sharma as its Chairperson for promoting anti-Muslim theory "love jihad".

The petition has been filed in the backdrop of a recent tweet of Ms. Sharma, whereby she claims to have met with the Governor of Maharashtra to discuss issues related to women safety and rise in love jihad cases.

Objecting to the last part of the tweet that refers to "love jihad", Gokhale submitted that Ms. Sharma has engaged in a "blatantly communal and divisive discourse" which casts aspersions on her ability to act in a non-partisan secular manner.

"The invocation of "rising cases of love jihad" by the Chairperson of Respondent No. 2 when no such cases even exist points to a communal dog whistle policy which is intended to target the Muslim community, vilify inter-faith couples, and create discord in society," he submitted.

It is contended that there is no term called "love jihad" that exists under extant Indian laws nor have any such cases been reported by any central agencies of the Union Ministry of Home Affairs.

"This term is usually used in an informal context to refer to a baseless conspiracy theory that Muslim men are waging "jihad" (holy war) against Hindus by making Hindu girls fall in love with them with the sole intention of converting them to Islam," he submitted.

Reliance is placed on the Lata Singh v. State of UP & Anr., (2006) 5 SCC 475, whereby the Supreme Court had emphasized the need for protecting the parties to inter-caste and inter-religious marriages and held that "This is a free and democratic country, and once a person becomes major he or she can marry whosoever he/she likes."

Gokhale has further submitted that in addition to this particular incident, there are also old tweets of Ms. Sharma which are "extremely misogynist and sexist" for the purpose of making political attacks.

Stating that Ms. Sharma's tweets have violated rights under Articles 14, 21, and 25 by of the Constitution and therefore, she must be removed from the office of Chairperson I exercise of powers under Section 4. (3)(d) of the National Commission of Women Act, 1990.

"The invocation of the term "love jihad" in official discourse by the Chairperson of Respondent no. 2 along with her old tweets which are extremely sexist and misogynist in nature prima facie show that the said person is incapable of acting in their position as Chairperson, NCW owing to her utter disregard for fundamental rights enshrined in the Constitution of India as well as towards the ideas of secularism and pluralism.

The Chairperson of Respondent no. 2 discussing "love jihad" with the Hon'ble Governor of Maharashtra in her official capacity is not a mere casual conversation but an indication of an official policy goal of demonizing inter-faith marriages that Respondent no. 2 intends to pursue," the plea states.