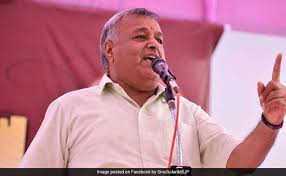 Special CBI Judge K M Dave will pronounce the quantum of sentence on July 11 in the case whose probe was handed over to the central agency by the Gujarat High Court after the Detection of Crime Branch gave a clean chit to Solanki.

The court held Solanki, who was the Junagadh MP from 2009 to 2014, guilty of murder and conspiracy along with his cousin Shiva Solanki.

The others accused convicted in the case were Shailesh Pandya, Bahadursinh Vadher, Panchan G Desai, Sanjay Chauhan and Udaji Thakore.

Jethwa, a lawyer, was shot dead for exposing illegal mining in and around the Gir Wildlife Sanctuary in which Solanki was involved through RTI applications.

In 2010, Jethwa had filed a Public Interest Litigation (PIL) against the illegal mining in and around the Gir sanctuary, the only abode of the Asiatic lion.

Dinu Solanki and Shiva Solanki were made respondents to the PIL, with Jethwa producing several documents showing their involvement in the illegal mining.

Even as the PIL was being heard, Jethwa was shot dead outside the Gujarat High Court here on July 20, 2010.

Initially the Ahmedabad police's crime branch probed the case and gave a clean chit to Dinu Solanki. Dissatisfied with the investigation, the high court handed over the case to the Central Bureau of Investigation in 2013.

The CBI filed a chargesheet against Solanki and six others in November 2013. Charges of murder and criminal conspiracy were framed against them in May 2016.

The court examined 196 witnesses during the first trial. As many as 105 of them turned hostile (did not support the CBI case) after being threatened by the accused.

Jethwa's father Bhikhabhai Jethwa then moved the high court seeking a re-trial. The HC ordered a fresh trial in 2017.

Bhikhabhai described Saturday's verdict as a "victory of Indian judicial system and the Constitution".

"It proves that Indian judiciary is still alive and even a criminal like Solanki is brought to justice," he said.

Advocate Anand Yagnik, one of the witnesses who also provided legal assistance to the Jethwa family, said it was the victory of "a common man" against a powerful person.

"It was established today that the Indian Constitution and democracy are so powerful that even a man who happens to be a (former) MP and who stole India's natural resources is small before the law," he said.