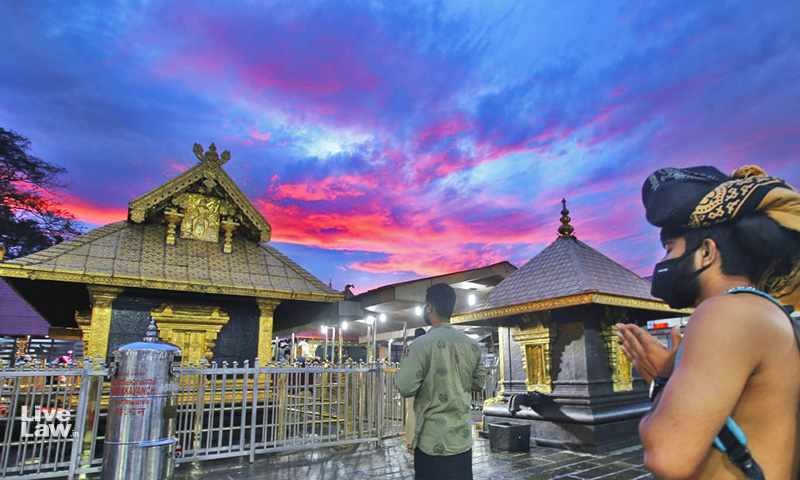 x
The Board submitted that raw materials used for preparing prasadam undergo strict quality checks twice, before being distributed to the public.

The Travancore Devaswom Board on Thursday submitted before the Kerala High Court that no stale jaggery was used to prepare prasadam or nivedyam at Sabarimala Temple, amidst controversy erupting over a petition alleging so.A Division Bench comprising Justice Anil K Narendran and Justice PG Ajithkumar recorded the submissions of the Board and appointed Advocate N Raghuraj Menon as...

The Travancore Devaswom Board on Thursday submitted before the Kerala High Court that no stale jaggery was used to prepare prasadam or nivedyam at Sabarimala Temple, amidst controversy erupting over a petition alleging so.

A Division Bench comprising Justice Anil K Narendran and Justice PG Ajithkumar recorded the submissions of the Board and appointed Advocate N Raghuraj Menon as amicus curiae to assist in the matter.

The counsel for the petitioner stated that he had objections to the statements filed by the respondents today, the Court granted him further time to file a reply. The matter will be taken up on Monday.

The petition was filed primarily seeking a direction to the respondents to ensure that only high-quality Satwik (pure) raw materials are used in the preparation of Nivedyam/Prasada at Sabarimala Temple.

The plea also sought to confiscate alleged spoiled Halal jaggery to prevent it from being sold /distributed for human consumption, and to conduct an enquiry into the violation of tender conditions by purchasing Halal Jaggery for offering to Lord Ayyappa.

The statement filed by the Travancore Devaswom Board contended that the petitioner had approached the court with 'unclean hands alleging falsehood and suppressing material facts'.

The respondents accused the plea of being a purposeful and malicious attempt to stall the sale of Appam and Aravana at Sabarimala, to cause huge financial losses to the Board and to torpedo the pilgrimage.

The statement also brought to the notice of the court certain fake news being published on social media in a manner that creates controversies touching the religious feelings of the devotees of Sabarimala.

"The sale of Aravana and appam forms the major part of revenue generated in Sabarimala. There is a calculated attempt to attack the reputation of Sabarimala and to hurt the religious feelings of the pilgrims and thereby destroying the communal harmony through various posts published and circulated in the social media."

Here are the main submissions made by the respondents in its statement filed before the Court today:

It was submitted that during 2019-2020, the contract to supply Jaggery in Sabarimala was awarded to Vardhan Agro Processing Ltd, a company in Maharashtra.

The said company supplied 19,96,034 kg of Jaggery powder during that season, out of which 16,59,094 kg was used. Thereafter, due to COVID protocol and restrictions, darshan was permitted only in a limited manner. Hence the balance jaggery remained at Sannidhanam.

In April 2021, the Executive Officer of Sabarimala requested the Food Safety Commissioner to test and report if the Jaggery powder stocked at Sannidhanam could be used. Samples were accordingly forwarded, tested and the Government Analyst's laboratory certified that its quality was satisfactory.

More samples were taken from the remaining old stock in September 2021 and tested to see whether they can be used.  It was then found not suitable for the preparation of Vazhipadu items.

Since there was no facility in Sannidhanam and Pamba to dispose of the old stock of almost 3.5 lakh kilograms, the jaggery was auctioned out to Southern Agro Tech India Pvt. Ltd, Thrissur to clear out the godown to stock fresh jaggery. The said company took the jaggery to their godown in Tirupur, Tamil Nadu as raw material for cattle feed and allied products.

During 2020-2021, the contract to supply Jaggery was given to another company in Maharashtra which was the lowest bidder. They started to supply from April 2021 and the same has been used since then. The Appam and Aravana are being prepared using this fresh stock of Jaggery.

The contractor supplies Jaggery powder at Pamba. The stock received at Pamba is tested by the Food & Safety Department and only after obtaining their clearance the same is accepted in Pamba Godown.

From Pamba, the jaggery is taken to the main store at Sabarimala according to requirement and availability of space. After preparation of Vazhipadu items, the same is tested once again before distribution/sale. In Sannidhanam, the Food & Safety authorities also conduct frequent inspections. Thus, the quality of the materials used is always maintained in Sabarimala.

Further, the Jaggery powder is packed in food-grade plastic to retain its quality since it is prone to fermentation on contact with moisture. The packet is transported from Maharashtra and is to be stored for a considerable period to maintain stock at Pamba and Sabarimala. After using the contents, the plastic bags are auctioned without leaving/dumping them in Sabarimala.

A few packets of jaggery supplied by Vardhan Agro-processing Ltd during 2019 contained the label, "HALAL JUH/HRC/437/2018". An enquiry was made into this with the supplier company, and they informed that it was because they were engaging in the export of jaggery.