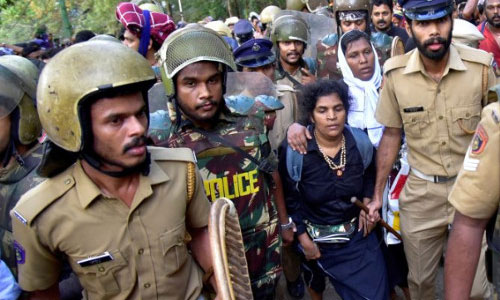 x
The recommendations by observers against special protection to women on individual basis are unsustainable in law, the police affidavit said.

It is not for the Team of Observers to suggest a strait jacket formula of not granting police protection to women, said the Kerala police in an affidavit filed in High Court of Kerala yesterday. The affidavit also said that the HC appointed team of observers comprising retired HC judges P R Raman and Siri Jagan, and Hemachandran IPS DGP, failed to mention in their report the...

It is not for the Team of Observers to suggest a strait jacket formula of not granting police protection to women, said the Kerala police in an affidavit filed in High Court of Kerala yesterday.

The affidavit also said that the HC appointed team of observers comprising retired HC judges P R Raman and Siri Jagan, and Hemachandran IPS DGP, failed to mention in their report the violence unleashed by right wing elements in Sabarimala to prevent entry of women

The affidavit sworn by District Police Chief, Pathanamthitta heavily criticised observers' report for recommending that police should not give special protection on individual basis in Sabarimala in the present festival season.The observers had suggested that protection should be limited only to special dignitaries, who are entitled to protection as per protocol, and to individuals who have obtained orders of the Court, for the time being till the end of present festival season.

This suggestion has been termed "wholly unsustainable in law".

"It will be very difficult for a woman to first come to Sabarimala, then face protests, then approach Court and then to come back. By the time she returns after getting an order from a Court of Law, in all probabilities,the right wing elements would have got a cue of the situation and they will be out there in full force to prevent the said woman to trekking to Sabarimala", said the affidavit.

"..any action taken by the State and the Police in tune with the said suggestion of the Team of Observers will amount to contempt of the judgment of the Honourable Apex Court permitting entry of women of all ages. If a woman wants police protection to trek to Sabarimala even if there is heavy rush of pilgrims, there is constitutional obligation for the police to provide such protection", the affidavit stated.

The police has therefore requested the High Court to reject the recommendations made by the observers.

It was violent protests and not women entry which caused hardship to pilgrims.

The police has come out against the findings in the report that the special  protection given to women who attempted entry in the last week of December had caused hardship and anxiety to other pilgrims. According to the observers, these incidents contributed to long queues of ordinary pilgrims and spread anxiety amongst them."While police are engaged in rendering special protection to the individuals their attention to the ordinary devotees and ensuring their safe movement for darshan up to Sannidhanam and smooth darshan is likely to be jeopardized", the observers had said.

These observations are slammed by police as "not based on any sound reasons or materials". The police affidavit stated that the unlawful protests under the auspices of Sabarimala Karma Samithi, Achara Samrakshana Samithi, a "particular political party', and other right wing elements contributed to commotion and anxiety among pilgrims. The report narrated the events surrounding the foiled attempts of  eleven women from "Maniti Sangom" and also two women, Bindu and Kanaka Durga, to trek up the Sabarimala hill in the last week of December. The police also explained that security concerns forced them to give permission to the private vehicle of Maniti group to proceed till Pampa.

Though the women were given police escort up till a point, the police later decided to bring the women back when the agitations got intense. This was done in exercise of the "operational freedom" of police, as a part of strategy to not to flare up the situation.

The findings of the observers that police protection to women who attempted entry resulted in holding up of other pilgrims, leading to long queues and traffic snarls on December 23 and 24 are not reflective of the true state of affairs. There was unprecedented inflow of pilgrims on these days. It was in no way related to the police escort to women devotees.

"Even if protection is granted to women wanting to have darshan of Lord Ayyapa of Sabarimala, it will not be at the expense of the safety and security of other devotees", affirmed the police.

As regards the unlawful protests by right wing elements against women entry in Sabarimala, the observers kept silent, said the police affidavit.

As per order issued by High Court on November 27, the Team of Observers, inter alia, had to see that there was no unlawful/objectionable activity from the part of "persons coming in disguise as pilgrims" and had to ensure that smooth pilgrimage was facilitated and there occurred 'no excess' from any corner. "the Report is silent about the unlawful and objectionable activities indulged in by persons disguised as persons disguised as pilgrims and the excesses committed by them", said the affidavit.

The affidavit made mention of the visit of two women aged below 50, Bindu and Kanaka Durga, visiting Sabarimala temple on the wee hours of January 2. It further mentioned the visit of a Sri Lankan lady Sasikala, who is also aged below 50, after climbing through holy 18 steps. In the absence of protesters, these women could visit the temple and offer prayers without any disturbance. These visits did not cause any hardship to pilgrims. None of the real devotees who were there caused any problems whatsoever, the affidavit said.

"All these are ample proof for the fact that it is because of the protesters that women entry was not successful in all attempts", stated the affidavit.

The police requested the HC to direct the team of observers to take stringent action against those who unleashed violent protests in Sabarimala in violation of Court orders.