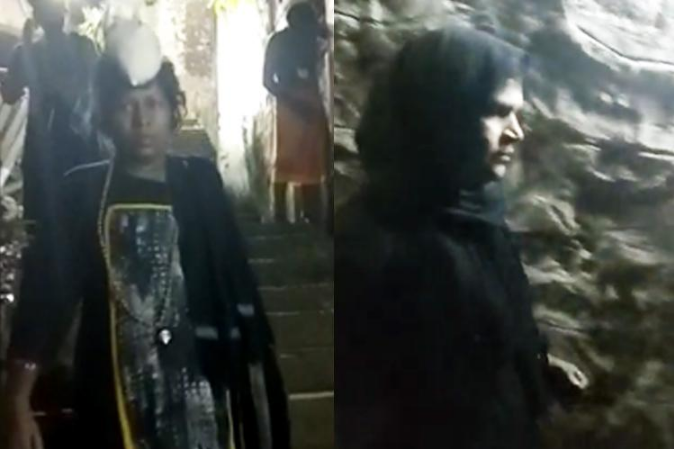 x
It was on the wee hours of today that two women, both aged below 50 years, entered the temple.

After several weeks of uncertainty and turmoil, the September 28 judgment of Supreme Court declaring right of women of all age groups to enter Sabarimala temple got implemented ,after two women, both aged below 50 years, visited the temple in the wee hours of today, accompanied by police escort.This news was published by Malayalam news channels today morning. Later, the news was confirmed...

After several weeks of uncertainty and turmoil, the September 28 judgment of Supreme Court declaring right of women of all age groups to enter Sabarimala temple got implemented ,after two women, both aged below 50 years, visited the temple in the wee hours of today, accompanied by police escort.

This news was published by Malayalam news channels today morning. Later, the news was confirmed by Kerala police.

Videos show these women, clad in customary black dress , visiting the temple with the security cover of police in mufti.

As per reports, they visited the temple at around 3.30 AM today, after being taken through the northern VIP gate.

The two women who executed the declaratory right given by the Supreme Court in the Indian Young Lawyers Association case are Bindu Krishna and Kanaka Durga. Bindu, aged 42, teaches law at School of Legal Studies, Kannur University. Kanaka Durga, aged 44, is a native of Angadipuram, Malappuram district.

Their previous attempt to enter temple on December 24 was foiled due to massive protests. They had reached almost a kilometer away from the Sannidhanam with police escort. But when the protests got intense, police decided to back off, forcing the women to abandon the plan.

Not to be dispirited by the agitation, the women had declared on that day that they will return.

After confirmation of women entry, the head priest announced that "purification ceremony" was necessary and shut down the temple at 10.30 AM today.

Protests against implementation of SC verdict

The SC verdict had not gone down well with the temple priests, the Pandalam royal family and sections of devotees. Several groups had openly declared that they will not permit the implementation of court verdict.

All previous instances of attempted women entry had triggered massive protests.  When the mandalam pilgrimage season commenced in mid November, the Government deployed large police force in and around Sabarimala, stating that right wing outfits were planning to create law and order issues. The Govt also put in place a lot of regulations on movement of pilgrims, on the basis of reports that hooligans under the guise of devotees were attempting to camp at the area to vitiate public peace.

The Govt measures had triggered of a lot of litigation in the High Court of Kerala. The High Court intervened, passing a slew of directions to ensure smooth pilgrimage. The Court also appointed a three-member observer committee to oversee security arrangements.

Almost 40 review petitions have been filed against the September 28 judgment. On November 13, the SC agreed to hear the review petitions in open court on January 22. However, the Court also clarified that there was no stay of the judgment.

The Travancore Devaswom Board has filed a petition in the Supreme Court seeking time to implement the court verdict. citing practical difficulties.

Several contempt petitions were also filed in the Supreme Court against leaders of political and social groups who declared open challenge to implementation of SC verdict. The Attorney General K K Venugopal withdrew himself from considering the sanction petition for initiating criminal contempt. Later, the matter was considered by Solicitor General Thushar Mehta, who refused to grant sanction.