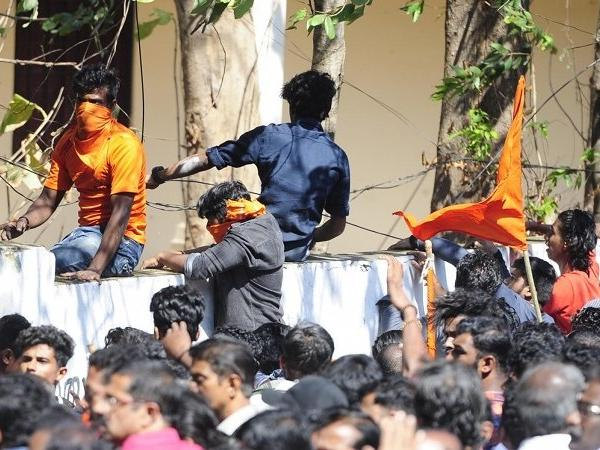 x
The PIL seeks appointment of claim commissioners to assess damages caused in the hartal and to award compensation to the victims of atrocities, by recovering losses from leaders.
Your free access to Live Law has expired
To read the article, get a premium account.

The High Court of Kerala today issued notice in a PIL filed to fix liability for damages caused in vandalism during the hartal conducted in the state on January 3 to protest the entry of women in Sabarimala temple.

The dawn to dusk hartal was called for by Sabarimala Karama Samiti, an organization rooting for protection of temple traditions, with the support of BJP, Hindu Aikya Vedi, RSS and other organizations.

The main office bearers of the Karma Samiti like T P Sen Kumar(former DGP), K S Radhakrishnan(former PSC Chairman),K P Sasikala(President of Hindu Aikya Vedi), and state office bearers of BJP such as K Surendran, P S Sreedharan Pillai, M T Ramesh etc. are made party respondents in the PIL, to whom notice by special messenger was ordered to be issued by the bench of Chief Justice Hrishikesh Roy and Justice A K Jayasankaran Nambiar.

The PIL was filed by T N Mukundan, "aggrieved by the wanton destruction caused to public property and fearsome mob-violence unleashed in the name of protest".

"Though the call for hartal was disguised as one for peaceful protest, from the very inception of the agitations on 02.01.2019 it turned out to be violent and intensely destructive, causing massive harm and injury to the common public", he said in the petition.

The petition placed reliance on the recent SC judgment in Kodungallur Film Society case, where elaborate guidelines were laid down for recovery of losses caused to public and private properties in public protests from the leaders who instigated violence. The petition also relied on the guidelines issued by the SC in Tehseen Poonawallah case to curb mob violence.

The petition prays for directions to the police authorities to initiate action as per the SC guidelines against the leaders who instigated violence. It also seeks appointment of claim commissioners to assess damages caused in the hartal as per the SC directions, and to award compensation to the victims of atrocities, by recovering losses from the leaders.

Yesterday, the very same bench had declared 'flash hartals' to be illegal and ordered that hartals can be held only after prior notice of seven days. The Court also clarified that any citizen can challenge the call for hartal during the said seven days.

It was during the wee hours of January 2 that two women aged below 50 years - Bindu and Kanaka Durga-  visited the temple, to mark the first occasion of exercise of the right declared by the SC for women of all ages to enter Sabarimala as per its September 28 judgment in the Indian Young Lawyers Association case.