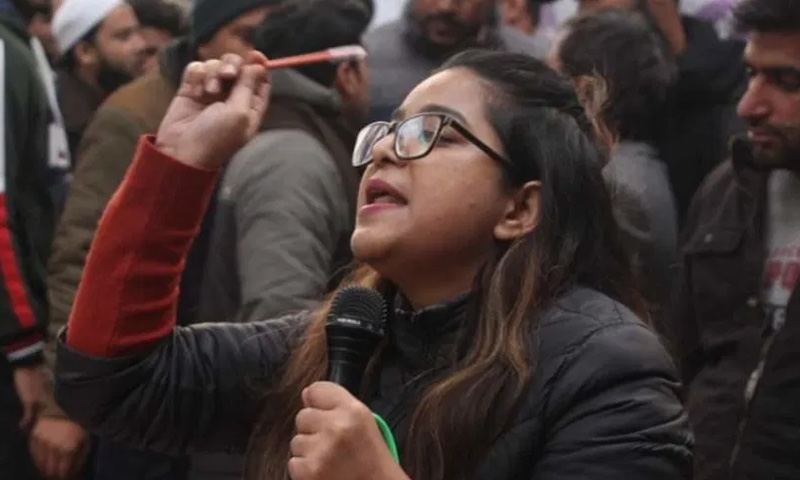 The Delhi police has submitted a status report in the Delhi High Court opposing grant of bail to Safoora Zargar, 27-year old Jamia Milia University student who is in custody in a case under Unlawful Activities Prevention Act in relation to conspiracy behind Delhi riots of February 2020.The 55-page report stated that Zargar, along with other accused "weaved a web of actions animated by...

The Delhi police has submitted a status report in the Delhi High Court opposing grant of bail to Safoora Zargar, 27-year old Jamia Milia University student who is in custody in a case under Unlawful Activities Prevention Act in relation to conspiracy behind Delhi riots of February 2020.

The 55-page report stated that Zargar, along with other accused "weaved a web of actions animated by unlawful object of creating terror and disaffection".

It was alleged that their aim was to "destroy, destabilize and disintegrate the Government of India in order to compel to withdraw the Citizenship Amendment Act (CAA) and the alleged National Register of Citizens"

According to the police, the road-blockade at Jafrabad as part of antic-CAA protests, during the time of visit of US President Donald Trump was to attract attention of international media for "propagating a narrative that the government of the day was anti-Muslim" and violence in North East Delhi was started on February 23 in pursuance of this design.

It was alleged that Zargar played an important role and was a key link of the conspiracy since beginning as the founder of the Jamia Coordination Commitee (JCC). It was further alleged that she created a Whatsapp group for this conspiracy and acted in tandem with other accused.

"She visited Khureji protest site and gave provocative speeches to incite the feelings of other caste and communities", the police claimed.

The police termed her as 'disposed towards creating turmoil to undermine public order and imperil national security', and claimed that sufficient evidence has been collected to make out a prima facie case. The Whatsapp chats found by the police are incriminating, and they are corroborated by the statements of the witnesses and the admissions of the accused, the police claimed.

The status report said that there is substantial cause for the arrest of the applicant and added that there are "grave and compelling reasons that she remains in custody".

"Unless evidence in rebuttal is presented (which can only be at trial) she cannot claim to be innocent of the acquisition made against her, as alleged or otherwise, in her petition. It is also extremely crucial to note here that direct evidence is not always available of a conspiratorial design and mere absence of a contemporaneous record does not even remotely suggest the absence of a case against the applicant/ accused because she stands clearly implicated by the evidence which stands unearthed by the investigation which is continuing even now and further trails of criminality is being unearthed," it added.

"From the evidence which has been collected so far, there remains not even an iota of doubt that the appellant/accused clearly played a conspiracy whereby she organized mobilization of the mob of a particular community, flaring up their communal passion and to instigate them for committing violence, whereas, simultaneously the other co-conspirators were actually collecting and organizing means and materials through which the said mob was to indulge in rioting and violence", the status report filed by Special Cell DCP PS Kushwaha.

Pregnancy not a ground to grant bail

The police asserted that the pregnancy of the accused cannot be a ground to grant bail.

"The law does not make any distinction in this regard. It is stated that the law unambiguously contemplates provisions to deal with pregnant criminals which itself indicates that the law permits use of sanction against this class of offenders".

It was stated that 39 deliveries have taken place in Tihar jail in the last 10 years, and that adequate medical care was being given to her.

The police also said "the very fact of rearing of life ought to have been a check on activities (by Zargar) which had a potential to cause, and which did in fact cause large-scale destruction of life and properties".