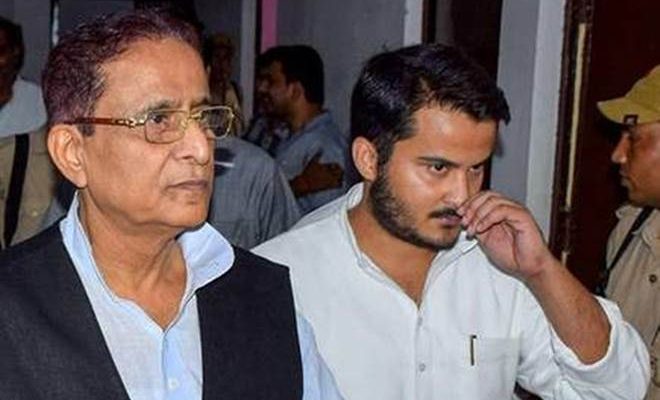 The Supreme Court on Thursday dismissed three separate pleas of Uttar Pradesh government challenging the bail granted to Samajwadi Party MP Azam Khan, his wife and son in a case of alleged forgery of birth certificate. The bench of Justices Ashok Bhushan, R Subhash Reddy and M R Shah dismissed the appeal filed by the state government against the October 13, 2020, order of the Allahabad...

The Supreme Court on Thursday dismissed three separate pleas of Uttar Pradesh government challenging the bail granted to Samajwadi Party MP Azam Khan, his wife and son in a case of alleged forgery of birth certificate.

The bench of Justices Ashok Bhushan, R Subhash Reddy and M R Shah dismissed the appeal filed by the state government against the October 13, 2020, order of the Allahabad High Court.

The Special Leave Petitions are dismissed. We make it clear that any observation made in the impugned order shall have no bearing in trial since it was only with regard to granting bail, the bench said in its order.

The state of UP was represented by SG Tushar Mehta and the respondents by Senior Advocate Kapil Sibal.

The Allahabad High Court had on October 13 last year held that its verdict disqualifying Mohd. Abdullah Azam Khan from the membership of the State Legislative Assembly for falsifying his age in the affidavit, is not conclusive for the purpose of consideration of bail application in the criminal case arising out of such falsification.

"A judgment of public nature should be such which declares, defines or otherwise determines the status of a person, or a jural relation of that person to the world generally. In the Election Petition merely a statutory challenge was made to the election of a third applicant (Abdullah Azam Khan) to the Legislative Assembly on the grounds available under Section 100 of the Representation of the People Act, 1951.

(Section 41 of the Evidence Act contemplates Judgments in-rem (regarding status of a person are effective against everybody while judgment), whereas Section 42 contemplated Judgments in-personem (binds only parties and not relevant in any case of subsequent proceedings))

Abdullah Azam Khan, son of former Cabinet Minister Mohd. Azam Khan and Dr. Tazeen Fatima, was Samjwadi Party's MLA from Rampur. He was disqualified from the membership of the State Legislative Assembly for being less than 25 years of age as on the date of election, in December last year.

The Court found that his parents had manipulated his birth certificates for the purpose of election and he was otherwise, ineligible to hold the office.

In this backdrop, a criminal complaint was filed against the family under Section 420 (Cheating) and for Forgery under Sections 467, 468, 471 IPC.

The present order pertains to a bail application moved by Khan and family. Noting that Abdullah Azam was not instrumental in fabricating the documents and was "only beneficiary", the Court allowed his bail plea.

"The third applicant has although contested and won election of the State Legislative Assembly on the basis of fabricated document, yet he was not instrumental in getting it issued by giving any affidavit before the Nagar Nigam, Lucknow. He was only beneficiary of the act done by other two applicants," the Court said.

The Bench has also permitted to release Ms. Fatima, under Section 437 (1) of CrPC.

"This Court is of the view that since 3rd applicant has not given any affidavit for changing his date of birth before Nagar Nigarm, Lucknow, but it has been done by the 1st and 2nd applicants, namely, Tazeen Fatima and Mohd. Azam Khan, hence he is entitled to be released on bail forthwith. 1st applicant deserves to be given benefit of Section 437 (1) Cr.P.C. being woman and shall be enlarged on bail."

Whereas, the former Cabinet Minister shall be released on bail only on the date the statement of the informant gets recorded.

Through a separate order, Single Bench of Justice Siddharth allowed the bail application moved by Mohd. Abdullah and his mother Tanzeen Fatima, in connection to a case alleging that they had influenced the Zila Adhikari, to get a government land allotted in their favour.

"After considering the rival submissions, this Court finds that the applicant was although beneficiary of the allotment made in his favour and co-accused Smt. Tazeen Fatima, his mother, but the main allegation is against his father, who was Cabinet Minister in the State Government at the relevant time and who got the land in dispute allotted in favour of his wife and son by misusing his official position. There is no allegation against applicant that he indulged in any manipulation for getting the land allotted in favour of his mother and later for himself."

The Court also noted that prior to allotment of the land to Khan, the property was rented out to one Gagan Lal, and the District Magistrate had been inept in protecting the property since 1947.

"It cannot be said that for the first time the land in dispute was allotted to the applicant and his mother by commission of alleged offences by the Zila Sahkari Vikas Sangh, Rampur. The State had not been vigilant in protecting the properties vested in it since the year 1947 and the Zila Sahkari Vikas Sangh, Rampur was treating the property as its own, whether malafidely or under some bonafide mistake is yet to be decided. The applicant may be having criminal history of 44 cases but there is no material on record proving his conviction in any case," the Court said.