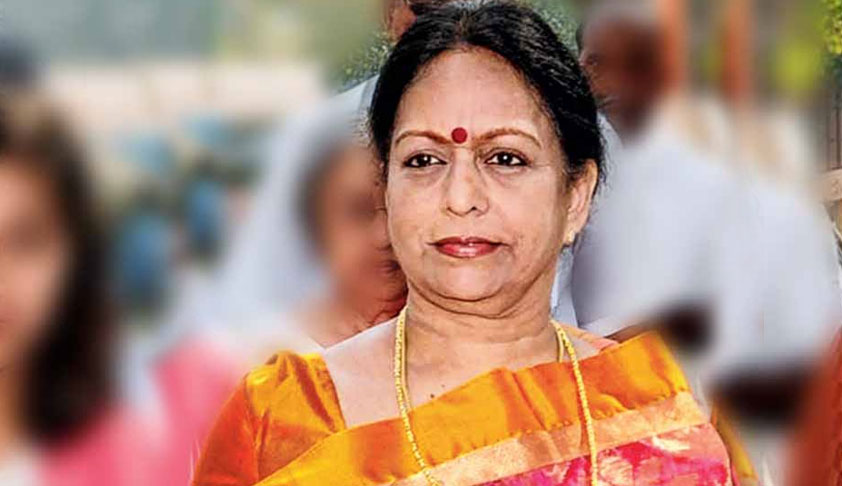 In a breather to former finance minister P Chidambaram's wife Nalini, the Madras High Court Saturday granted her interim protection from arrest by the CBI in the Saradha chit fund case till she obtains regular anticipatory bail from a jurisdictional court in West Bengal.

The judge granted four weeks interim bail to Nalini and directed her to surrender before the Chief Judicial Magistrate, Egmore here and furnish sureties and thereafter approach the jurisdictional court in West Bengal and obtain regular anticipatory bail.

Special Public Prosecutor (Enforcement Directorate) G Hema strongly opposed the petition and argued that the court should not entertain Nalini's plea since it does not have jurisdiction in the matter.

The ED had registered an ECIR (Enforcement Case Information Report) in the matter under the Prevention of Money Laundering Act.

Nalini, a senior advocate, moved her application apprehending arrest a day after the CBI filed a charge sheet against her in a Kolkata court, alleging she had received Rs 1.4 crore from Saradha group of companies, which was involved in a chit fund "scam".

In her plea, Nalini contended that the alleged payout was a legitimate fee from Saradha Realty Limited on behalf of Manoranjana Sinh in connection with Positive TV.

Notably, her name does not figure in the previous CBI charge sheets against proprietor of the Saradha group Sudipto Sen and his companies in connection with the alleged chit fund scam, she said.

"In total contradiction of such previous charge sheets, on January 11, the CBI filed the sixth supplementary charge sheet before a West Bengal court for offences, including conspiracy under the IPC, alleging her involvement in the scam," counsel for Nalini said.

There cannot be a change in stand by the CBI in the subsequent supplementary charge sheet wherein it had made "legal fee" as "bribe money," she contended.

It is settled law that after registration of FIR and till the time of filing a charge sheet, if a person is not arrested, then a person need not to be subjected to custodial investigation.

In such cases, the person can appear before the court after receipt of summons.

Nalini alleged that the government has been misusing the central agencies by filing false cases against her family members due to "political vendetta".

The CBI had alleged that Nalini entered into a criminal conspiracy with Sen and other accused persons with an intention of cheating and misappropriation of funds of Saradha group of companies.

The agency alleged that Manoranjana Sinh, the estranged wife of former Union minister Matang Sinh, introduced Sen to Nalini to manage probes by various agencies like SEBI, ROC against him, for which she allegedly received Rs 1.4 crore during 2010-12 through his companies.