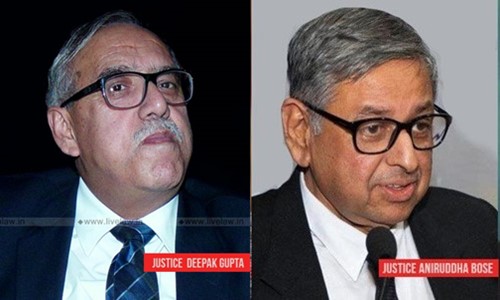 x
"The judgment may be right or wrong, but the Higher Courts should not pass scathing remarks against the presiding officer of the lower courts only because they do not agree with the point of view of the Trial Court."
Your free access to Live Law has expired
To read the article, get a premium account.

The Supreme Court, in an order passed last month, observed that the Higher Courts should not pass scathing remarks against the presiding officer of the lower courts only because they do not agree with their point of view.

The bench comprising of Justice Deepak Gupta and Justice Aniruddha Bose was considering an appeal filed by a judicial officer, against whom the Allahabad High Court not only made scathing observations but also imposed costs of Rs. 10,000.

The High Court had passed these remarks against Judge Surendra Prasad Mishra, who was then presiding Motor Accident Claims Tribunal, while disposing an appeal filed against an order passed by him. The remarks questioned his bona fides and cast aspersions on his integrity and also accused him of favouring a particular lawyer. It was also directed that the matter be referred on the administrative side for an appropriate action.

The Supreme Court bench,in the appeal filed by Mishra, observed that all the adverse remarks in the judgment made against the judicial officer, whereby his integrity has been questioned or whereby aspersions have been cast on his character, judicial orders or otherwise are bound to be expunged.

The bench then referred to various earlier judgments and observed that such adverse remarks against judicial officers should normally not be passed in judgments. It said:

"We follow a system where the judgment of a Court is subject to judicial scrutiny by Higher Courts. The judgment may be right or wrong, but the Higher Courts should not pass scathing remarks against the presiding officer of the lower courts only because they do not agree with the point of view of the Trial Court."

The court further observed that if the High Court felt as strongly as it did that action needed to be taken, then the proper course was to place the matter before the Chief Justice on the administrative side with a request that action be taken against the concerned judicial officer. In this case, the High Court did that but in addition passed the scathing remarks which virtually meant that the appellant stood condemned even before any disciplinary proceedings were initiated against him, the Court said.

The High Court can definitely say that the order passed shows total lack of knowledge of law. But when the High Court went further and virtually castigated the judicial officer as an unworthy and corrupt person then the High Court, in our view, over-stepped its boundaries and such remarks need to be expunged.

The bench then set aside the order imposing costs of Rs.10, 000 on the judicial officer. Normally, costs are not imposed on the presiding officer of the Court and this practice should not be encouraged, it added.

The judgment of the High Court impugned the following proceedings of the MACT Judge. In a MACT case, the matter was settled between the claimant and the Insurance Company and the settlement petition was filed and signed by one lawyer. At that time another lawyer raised an objection that his fees had not been paid and that the compromise should not be recorded which found favour with the presiding judge.

Agreeing with the High Court order, setting aside the MACT order, the bench said:

It is not for any Court to settle the dispute between the lawyers with regard to payment of fees. If there is any misconduct on the part of the lawyer in taking up the brief of another lawyer, normally it is for the Bar Council and not for the Court to settle the dispute. It was rightly held by the High Court that the claimants in the Motor Accident Claims Tribunal should not be made to suffer because of the dispute between the lawyers.