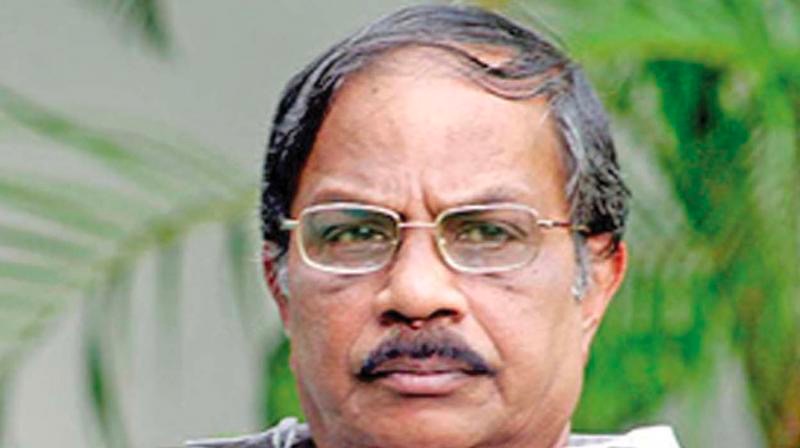 Subscription starts from
₹ 599+GST
(For 6 Months)
View Plans
Premium account gives you:
Subscribe Now
Already a subscriber?
Login
The Supreme Court has accepted the settlement reached between between the Novelist M T Vasudevan Nair and Director V A Shrikumar in connection with the making of the movie: Randamoozham.

As per the settlement terms, the Director would hand over the script both in Malayalam and English in typewritten and electronic form to MT Vasudevan Nair for the movie to be made of the said novel 'Randmoozham' written by him. The author would pay back the sum of Rs. 1,25,00,000/-.

"Petitioner (V A Shrikumar) can proceed in his dream of creating a Magnum Opus based on the epic Mahabharata by roping in another story and scriptwriter or by creating his own story and script and screenplay which will be totally and substantially different from "Randamoozham" written by the respondent and without Bhima as the central character.In such a scenario both parties will uphold each other and show willingness to desist from causing any hindrance whatsoever to the petitioner in his attempt to commercially exploit any movie/magnum opus based on the Mahabharata Legend. ", the settlement memorandum reads.

Famous Malayalam Novelist M T Vasudevan Nair, the author of the classic Malayalam Novel titled "Randamoozham", had entered into an agreement with Earth and Air Films Pvt. Ltd.  to produce motion picture in Malayalam, English and Hindi on the basis of novel. As the latter failed to pay the entire consideration, MT Vasudevan Nair filed a suit was for a declaration that MOU and agreement entered into between the plaintiff and defendants stood terminated and the defendants were to be restrained by a decree of permanent prohibitory injunction from making use of MOU and agreement and further for a decree of mandatory injunction to the defendants return the English and Malayalam script of "Randamoozham" in type written and electronic formats.

In this suit, the defendants entered appearance and contended that there was a valid arbitration clause to the effect that disputes or differences that arise between the parties shall be resolved through Arbitration in accordance with Clause 7 of MOU and Clause 16 of the agreement. The trial court held that the relief sought was a declaratory relief and a permanent prohibitory injunction. Those were reliefs which could be granted by a civil court. It is this order of the Trial Court which has been now assailed upto High Court and thereafter to Apex Court.

"The Special Leave Petitions are disposed of as withdrawn since the dispute has been settled. The parties shall abide by the settlement.", the bench comprising Justices DY Chandrachud, Indu Malhotra and KM Joseph observed on Monday while disposing SLP.