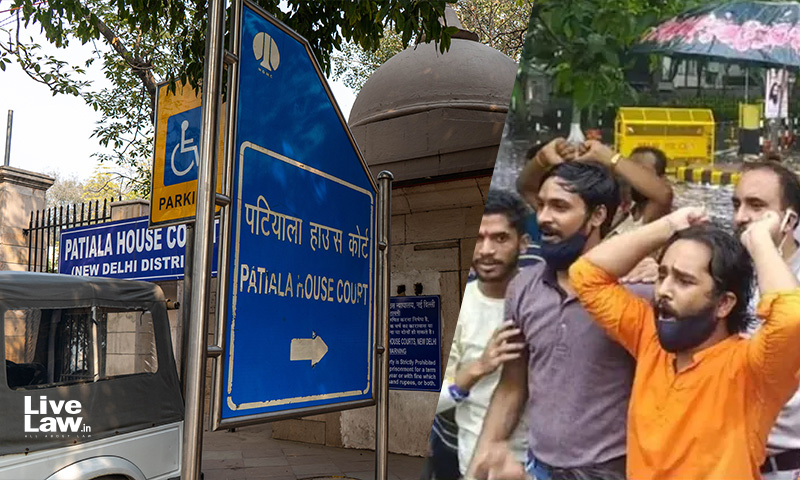 The Delhi Court on Thursday rejected bail pleas of 3 men - Preet Singh, Deepak Singh Hindu and Vinod Sharma who have been arrested in connection with alleged inflammatory and anti-Muslim sloganeering at Jantar Mantar. While rejecting their bail pleas, the Link Metropolitan Magistrate Udbhav Kumar Jain observed that it is the duty of every citizen that while he enjoys his right...

The Delhi Court on Thursday rejected bail pleas of 3 men - Preet Singh, Deepak Singh Hindu and Vinod Sharma who have been arrested in connection with alleged inflammatory and anti-Muslim sloganeering at Jantar Mantar.

While rejecting their bail pleas, the Link Metropolitan Magistrate Udbhav Kumar Jain observed that it is the duty of every citizen that while he enjoys his right to express himself, he preserves religious harmony.

Delivering 3 separate bail orders, the Judge noted that with regard to the commission of offence u/s 153A IPC, the FIR had no specific allegation against the applicants.

However, on the prima facie perusal of the material available on record including the alleged video footage, the Court noted that the same failed to find support in favour of the applicant/accused.

The Court saw the alleged video clippings and played some part of it in Open Court as well.

Importantly, while dealing with the bail plea of Accused Deepak Singh, the Court observed thus:

"In one of the clippings, applicant/accused, as identified by the IO in the video clipping, can be seen making scathing remarks which are undemocratic and uncalled for from a citizen of this country where principles like Secularism hold the value of basic feature imbibed in the Constitution."

On the other hand, while dealing with Preet's bail plea, the Court noted that in the video, he could be seen with the accused Deepak Singh.

Also, while deciding on the bail plea of Vinod Sharma, the Court observed thus:

"The CDR record shows that the applicant/accused was present on the spot at the same time when other accused persons Deepak Singh and Preet Singh were also present and alleged speeches were made."

Also, the Court noted in the bail pleas that Freedom to express oneself is indeed allowed to be enjoyed by the citizens to the fullest possible extent, yet with every right there is a corresponding duty attached.

Further, averring that at the instant stage, the Court cannot check the veracity of the video clippings which is a matter of appreciation of evidence to be done at a later stage, the Court did not deem it fit to release them on bail.

In related news, a Delhi Court on Wednesday had allowed the bail plea of former Delhi BJP Spokesperson and Supreme Court lawyer Ashwini Upadhyay, who was arrested and remanded to two days judicial custody in connection with the anti-Muslims slogans raised at an event organized at Jantar Mantar.

The order has been passed by a Court of Metropolitan Magistrate Udbhav Kumar Jain.

"As far as the offence u/s 153A IPC is concerned except for mere assertion, there is nothing on record to show that the alleged hate speech to promote enmity between different groups was done in the presence or at the behest of the applicant/accused. Even during hearing, this Court has inquired from Ld. APP and so far, there is nothing against the accused in the alleged video," the Court observed.

Advocate Ashwani Dubey appeared for all the three accused.

Obhan & Associates Act On Okinawa Autotech's Joint Venture With Tacita
Latest News
+ More
1Delhi High Court Weekly Round Up: May 16 To May 22, 2022
2Hindu Succession Act - HUF Property Is Presumed For Be For Widow's Maintenance When She Has Its Settled & Exclusive Possession : Supreme Court
3Shiksha Karmis In Chhattisgarh Cannot Claim Parity In Pay-Scale With That of Municipal Teachers: Supreme Court
4'Ragging Is Antithetical To Equality': Calcutta HC Orders University Students To Pay Medical Expenses Of Injured Students, Engage In Community Service
5Weekly Round-Up of Tax Cases: May 15 To May 21
6A Candidate Has No Legal Right To Insist That The Recruitment Process Set In Motion Be Carried To Its Logical End : Supreme Court
7Women Leaving Law: What Is The Way Ahead?
8While Settling Claims, Insurance Company Should Not Seek Documents Which Are Beyond The Control Of Insured To Furnish: Supreme Court
लाइव लॉ हिंदी
+ More
International
+ More
Environment
+ More
1Supreme Court Permits E-Rickshaws In Matheran As Pilot Project To Check Feasibility
2In Case Of Doubt, Protection Of Environment Would've Precedence Over Economic Interest: SC Revokes Approval For Doubling Castlerock to Kulem Railway Line
3NGT Bars Auroville Foundation From Township Construction Till Environmental Clearance Is Obtained
4Ghazipur Landfill Fire: NGT Says Dump Sites In Cities Are Like 'Time Bombs', Constitutes Joint Committee Headed By Former Delhi High Court Judge