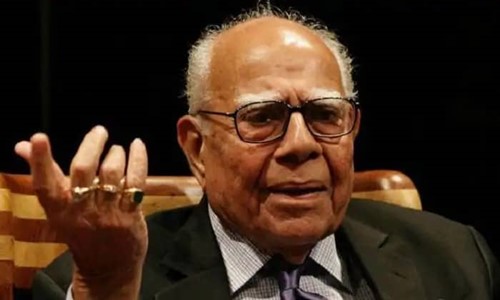 The Supreme Court Bar Association (SCBA) on Sunday condoled the demise of senior lawyer and former Union minister describing him as its "illustrious member" and a "doyen of criminal law".

Jethmalani, 95, died here on Sunday, six days before his 96th birthday. He served as SCBA president in 2010.

"Armed with a silver tongue, an erudite mind and a legendary wit, Shri Jethmalani ji was truly a stalwart of the Indian Bar and a lawyer par excellence. His legacy shall forever be etched in the pages of precedents and in the fond memories of the entire legal fraternity of India," the SCBA said.

Senior advocate and SCBA president Rakesh Khanna said the bar body, which was once presided over by Jethmalani, joined the nation in mourning the demise of one of its most illustrious senior members and former President" and "doyen of criminal law".

"Having joined the Bar at the age of just 17, Jethmalani ji earned the distinction of being the youngest advocate allowed to practice," the bar body said in its statement.

SCBA offered condolences to Mahesh Jethmalani, senior advocate and son of Ram Jethmalani, and termed the loss as "colossal".