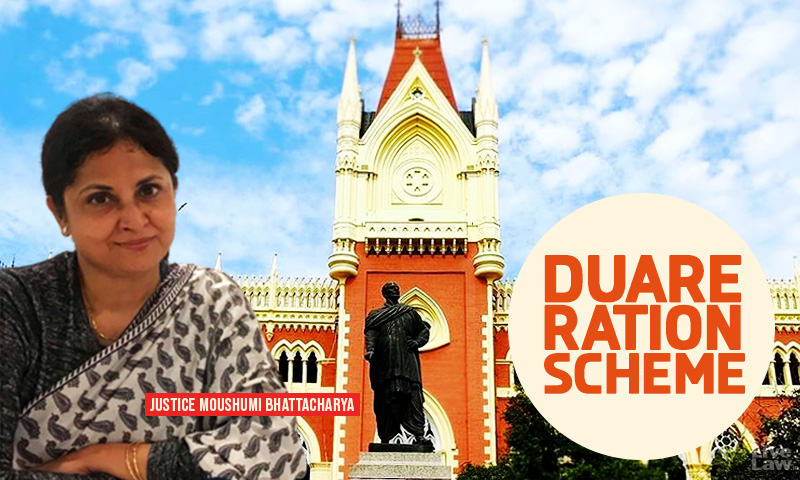 In a significant judgment, the Calcutta High Court today upheld the vires of the ambitious meal scheme of the West Bengal Government, the Duare Ration Scheme which essentially seeks to ensure doorstep delivery of essential food items. The words "Duare Ration" in Bengali translate to "ration at the doorstep" in English.Noting that the scheme could be seen as a step in the direction to...

In a significant judgment, the Calcutta High Court today upheld the vires of the ambitious meal scheme of the West Bengal Government, the Duare Ration Scheme which essentially seeks to ensure doorstep delivery of essential food items. The words "Duare Ration" in Bengali translate to "ration at the doorstep" in English.

Noting that the scheme could be seen as a step in the direction to help ordinary ration card holders to tide over the difficulties in the wake of the pandemic, the Bench of Justice Moushumi Bhattacharya observed thus:

"...the Duare Ration Scheme may be perceived as a reform in the targeted public distribution system and a welfare scheme formulated for reaching food and nutritional security as a necessity-driven measure to tide over the extant existential challenge."

Essentially, the court was dealing with two pleas filed by the fair price shop dealers, who sought a declaration that the Scheme is ultra vires the Constitution of India. They prayed for a Writ of Mandamus on the State and the Director, Food Supplies Department, Government of West Bengal, to cancel the Scheme.

The underlying ground of the challenge was essentially that the State cannot frame any Scheme in relation to the distribution of ration items which is already occupied by a Central Government Order passed under the Essential Commodities Act, 1955 and the National Food Security Act, 2013.

On the other hand, the State Respondents argued that the issues urged in the instant writ pleas were decided by the co-ordinate Bench in the case of Mrityunjoy Garang & Ors. vs. State of West Bengal & Ors, wherein a writ plea was dismissed challenging the scheme.

However, the Court proceeded with the instant pleas while observing that in Mrityunjoy Garang, the challenge was to a pilot project in the form of certain guidelines framed by the Government of West Bengal for the implementation of the Duare Ration Scheme, however, in the instant pleas, a challenge was made to West Bengal Duare Ration Scheme, 2021" which came into force with effect from 16th November, 2021, subsequent to the Judgment in Mrityunjoy Garang.

The Court referred to various provisions of the Essential Commodities Act, 1955 and the National Food Security Act, 2013 and thereafter, concluded that none of the two central legislations contemplate doorstep delivery of foodgrains to the targeted beneficiary and this area is covered by the State's scheme.

"...the field covered by both the existing legislations, read with the relevant Orders, is transportation of foodgrains from the Food Corporation of India godowns to the doorstep of the fair price shops (words are underlined for emphasis). The Duare Ration Scheme therefore stretches the boundaries of the Central Government Order of 2015 and walks the metaphorical last mile, so to speak," the Court observed.

In view of this, the court discarded the contention of the petitioners that the Duare Ration Scheme encroaches upon the space already taken by the Order dated 20th March, 2015 of the Central Government.

Importantly, the Court also underscored that the implementation of the Duare Ration Scheme does not contain any provision which contemplates a conflict, direct or otherwise, with any existing order or scheme formulated by the Central Government.

"The object of the Scheme is to regulate the distribution of ration items under the Targeted Public Distribution System for the beneficiaries for providing ration at the doorstep of the beneficiaries...The Duare Ration Scheme covers the additional, unexplored and exclusive space from the fair price shop to the doorstep of the ration card holder. The Scheme is hence a field yet to be covered as far as the defined end-point of the Central Government Order is concerned," the Court added.

Concludingly, dismissing the plea, the Court was of the opinion that the Duare Ration Scheme was born out of the restrictions imposed on the mobility of ordinary citizens during the pandemic and that it may be envisaged as an extension of the across-the-board initiatives to deliver essentials at the doorstep of consumers.