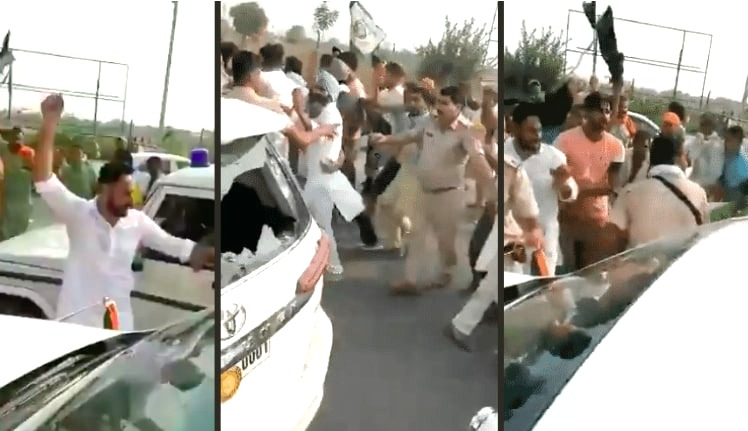 Observing that "commission of offence of sedition under Section 124-A IPC in the case is doubtful" the Sessions Court, Sirsa, on Thursday granted bail to five farmers who were charged with Sedition for allegedly attacking the convoy of Vidhan Sabha Deputy Speaker Ranbir Gangwa earlier this month. Sessions Judge, Sirsa, Rajesh Malhotra granted bail to protesting farmers Sahab Singh,...

Observing that "commission of offence of sedition under Section 124-A IPC in the case is doubtful" the Sessions Court, Sirsa, on Thursday granted bail to five farmers who were charged with Sedition for allegedly attacking the convoy of Vidhan Sabha Deputy Speaker Ranbir Gangwa earlier this month.

The facts in brief (as per the FIR)

On July 11, 2021, a training camp of BJP Workers was organized at Choudhary Devi Lal University, Sirsa and Ranbir Singh Gangwa, Speaker, Haryana Government was presiding over the said function.

Many farmers were protesting against the same at the gates of the University and they had already conveyed the message on social media etc. that they will not allow the said programme in the university at any cost.

At about 4:00 PM, 90/100 unknown anti-social persons, allegedly, in pursuance to conspiracy under the leadership of Harcharan Singh Panjuana & Prahlad Singh Bharukhera tried to enter Chaudhary Devi Lal University after breaking the barricades.

In the meantime, the vehicle of the Haryana Assembly's deputy speaker came out of the gate and protesters intercepted the said vehicle and raised slogans to overthrow the Govt. and eliminate the ministers and Govt. cannot do anything against them.

Allegedly, thereafter, the protesters raised slogans against the Govt. and attacked the vehicle with 'Dandas' of their flag and stones and they also attacked the police officials and damaged the vehicle of the Deputy Speaker, Haryana Government.

It was argued by the State Government that even though the applicants before the Court have not been named in the FIR, but they are clearly visible in the various videos and that the prime accused are absconding and hence, present bail application be dismissed.

The Counsel for the petitioners said that it was clear that State Government and State machinery were aware of the farmers' protest and even then, the Deputy Speaker, Haryana Government visited the university to incite the feelings of protesting farmers, which led to said incident.

It was further argued that admittedly the protesters were not carrying any arms to harm any person, but the situation turned volatile due to some miscreants for hurting the feelings of farmers by the Deputy Speaker.

It was also averred that the case of sedition was not attracted in the instant case as there is nothing on record that said incident could have led to the overthrow of the State Govt, but Section 124-A IPC was added to increase the gravity of the alleged offence.

"Protest and general public opinion against the working of State Government and State machinery does not attract Section 124-A IPC in any manner," it was added.

At the outset, the Court noted that the commission of offence of Sedition under Section 124-A IPC in the case was doubtful.

Further, the Court noted that the applicants are not named in the complaint and the fact that two leaders who had organized the protest are absconding was no ground to dismiss the bail application as their arrest was likely to take time as they have no control over them.

Hence, in the facts & circumstances of the present case, applicants were permitted to be enlarged on bail on furnishing their personal bonds in the sum of Rs.50,000/- each with one surety in the like amount each to the satisfaction of this Court.