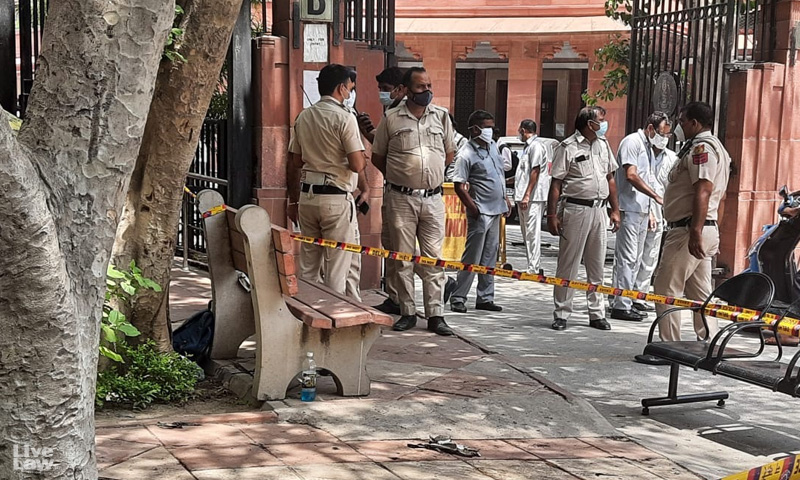 A Supreme Court advocate Alakh Alok Srivastava has written to the Chief Justice of India, NV Ramana to take suo-motu cognizance of the "heart wrenching incident" which took place on August 16, 2021, wherein, a 24-year-old (now dead) and her male friend had set themselves on fire, outside Supreme Court premises. The letter further seeks appropriate directions to...

A Supreme Court advocate Alakh Alok Srivastava has written to the Chief Justice of India, NV Ramana to take suo-motu cognizance of the "heart wrenching incident" which took place on August 16, 2021, wherein, a 24-year-old (now dead) and her male friend had set themselves on fire, outside Supreme Court premises.

The man had sustained 65% burn injuries while the 24-year-old woman had suffered 85% burns and both were admitted to Ram Manohar Lohia Hospital.

"It is quite axiomatic from a bare perusal of the aforesaid news report that the deceased Rape Victim and her family members had leveled serious allegations on the accused MP, policemen and also on a member of judiciary."

"While I completely disapprove of her drastic decision to set herself on fire, at the same time, I also strongly feel that the victim very much deserves to get JUSTICE even after her death, pursuant to the aforesaid unfortunate incident, which took place at the DOORSTEPS OF OUR HON'BLE SUPREME COURT OF INDIA," the letter adds.

A Supreme Court advocate, Alakh Alok Srivastava (@advocate_alakh) has written to the Chief Justice of India, NV Ramana requesting him to take suo-motu cognizance of the death of a 24-yr old Rape Victim, who had set herself abalze outside Supreme Court. pic.twitter.com/DBeQlZ8Cjs

It is pertinent to mention that before setting themselves ablaze, the man and woman went live on Facebook in which she while disclosing her identity had alleged that she had filed a rape case against Rai in 2019.

The woman in her video had also alleged that some senior officers and others were supporting the accused.

As per the report of the Indian Express, in an FIR filed on May 1, 2019, the woman had said that she came to know Rai while contesting student union elections, and had sought financial help from him, thereafter, it was claimed, the he called her to his apartment in Varanasi on March 7, 2018, and sexually assaulted her.

She had also alleged that Rai had filmed the assault, and threatened to circulate the video clip on social media.

Deputy Commissioner of Police (New Delhi) Deepak Yadav had at that time said that an inquiry was underway to ascertain the exact reason, but it was suspected that she attempted suicide as she feared being framed in fraud case by the accused party.

Woman in her live video had also claimed that a non-bailable warrant was issued against her by a local court in UP and that she was also summoned by the judge.

The woman in March had filed a plea in the Supreme Court seeking transfer of her rape case for a fair trial from Allahabad to Delhi on grounds of her threat to life and later in August, a local court in Varanasi had issued a non-bailable warrant against her in a case of forgery based on a complaint filed by the brother of the accused MP.