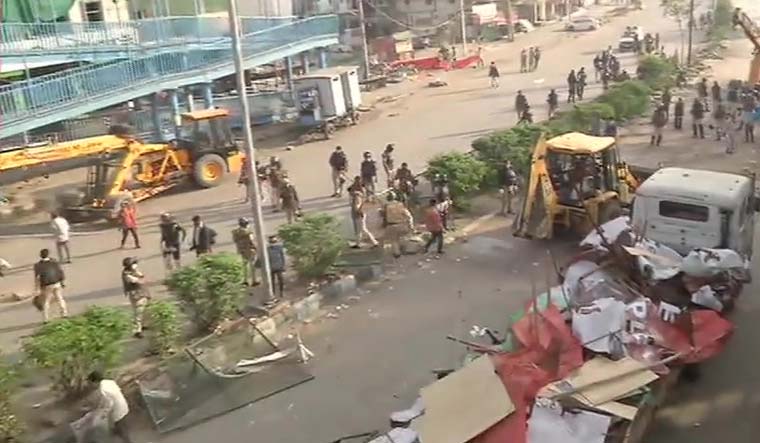 A Delhi Court on Sunday granted bail to three persons accused of disobeying directions of the State and Union Government regarding the lockdown imposed in view of the Coronavirus outbreak.

The accused were alleged to have been present at the anti-CAA protest site at Shaheen Bagh, in violation of the curfew norms imposed in the wake of COVID-19 pandemic.

One among the 11 bail conditions imposed by Duty Metropolitan Magistrate, Saket Court Delhi, is as follows :

"the applicant shall not be posting any opinion regarding the Citizenship Amendment Act/National Population Register/National Register of Citizens on any social media, instant messengers nor will be giving any interview in this regard to print and electronic media"


After the Prime Minister announced 21-day national lockdown to prevent COVID-19 transmission, the Delhi police, on March 25 morning, cleared the structures at the protest site at Shaheen Bagh. Following that, the Shaheen Bagh protesters  made a complaint to the Supreme Court stating that the police action was high-handed, as the protesters had voluntarily left the site much before in adherence to COVID-19 protocol.

In the bail application, it was averred by the Counsel for the accused persons that they were innocent and had nothing to do with the alleged offence. Due to likelihood of being infected with Coronavirus if detained for too long and that there was no criminal involvement in any other cases, the accused was eligible for bail, the counsel submitted.

The Additional Public Prosecutor, Pravesh Vyas, opposed the bail application on the grounds that the directions of the State Government and Union Government regarding the lockdown and prohibition of protests to prevent the spread of the virus.

The Duty Metropolitan Magistrate, Jitendra Pratap Singh, of the Saket District Court, noted that that the only non-bailable offence invoked against the accused was Section 353 of the Indian Penal Code.

However, in view of the directions given by the Supreme Court of India and the Delhi High Court for de-congestion of over-populated prisons in the wake of COVID-19, the Duty MM proceeded to grant bail to the accused by imposing suitable restrictions.

This is the first bail application which has been heard and allowed post the nationwide lockdown which was imposed on 25th March, 2020. Courts, including the Supreme Court of India and High Courts, have been functioning in a restricted manner and are only hearing urgent matters via video-conferencing.

In addition to furnishing a personal bond for a sum of Rs. 25,000/- with two sureties of like amount, the following restrictions were imposed:

i. That the applicant shall be marking his attendance at PS Shaheen Bagh every Monday at 10AM during the investigation period of this case;

ii. That the applicant shall not visit the site of the protest regarding Citizenship Amendment Act/NRC/NPR at Road No.13A, Shaheen Bagh (Kalindi Kunj – Sarita Vihar Road) for the purpose of any protest etc.

iii. That the applicant shall not participate in any meeting/gathering where more than 5 persons in total including the applicant are assembled during the existence of the advisories/directions of the State Government and of the Union Government qua the COVID 19;

iv. That the applicant shall not be posting any opinion regarding the Citizenship Amendment Act/National Population Register/National Register of Citizens on any social media, instant messengers nor will be giving any interview in this regard to print and electronic media;

v. That the applicant shall be complying with the directions of the State Government and of the Union Government and that of the local self-governing bodies made to contain the spread of the Coronavirus;

vi. That the applicant shall not directly or indirectly make any inducement, threat or promise to any person acquainted with the facts of the case so as to dissuade him to disclose such facts to the court or to any other authoriy;

vii. That he shall not indulge into similar offence or any other offence in the event of release on bail;

viii. That he shall not tamper with evidence in any manner;

ix. That in case of change of his residential address, he shall intimate the court about the same;

x. That he shall regularly appear before the court on each and every date of hearing; and

xi. That he shall not leave the territory of the Union of India without prior permission of the court.