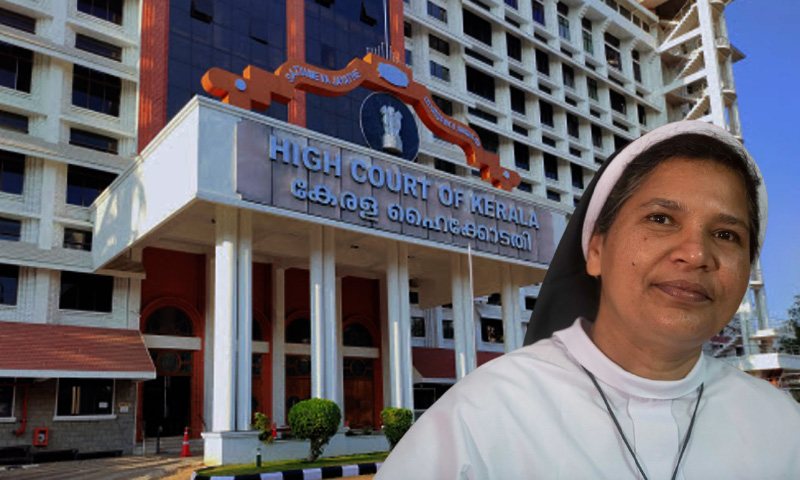 x
'Do not throw me into the streets', Sister Lucy pleaded before the Court.

In a historic turn of events, Sister Lucy Kalappura appeared before the Kerala High Court on Wednesday to argue her own case challenging her eviction from the convent. This is reportedly the first instance of a nun to appear before a court to fight her case in Indian history. Sister Lucy Kalappura came to public spotlight with her open protest against Bishop Franco Mulakkal, who was...

In a historic turn of events, Sister Lucy Kalappura appeared before the Kerala High Court on Wednesday to argue her own case challenging her eviction from the convent. This is reportedly the first instance of a nun to appear before a court to fight her case in Indian history.

Sister Lucy Kalappura came to public spotlight with her open protest against Bishop Franco Mulakkal, who was accused of raping a nun. Last month, the supreme appellate authority of the Catholic Church at Vatican rejected her appeal against her expulsion from her congregation.

Justice Raja Vijayaraghavan reserved orders in the matter while emphasising that police protection can only be granted to her if she vacates from the convent.

The nun's decision to appear herself came after her lawyer relinquished the vakalath in a petition where she had sought police protection. She reached out to a few advocates after the relinquishment, however, no one was apparently inclined to represent her in the matter.

The Court had recently granted interim police protection to the sister. However, upon her right to continue as a member of the Franciscan Clarist Congregation(FCC) having been extinguished, it was observed that her continued residence in the Convent will only lead to continuous strife and conflicts. In an oral statement, the Court observed for the above reason, she should not continue to stay at the convent.

"This is my first time appearing before the Court. I had applied for police protection one year ago. The hearing for the same took place recently, and I was granted protection by the Court. There are currently proceedings going on to evict me from the convent. I am challenging this because it is unfair. In that regard, I have filed a complaint before the civil court in 2019 and I have an injunction order in my favour," the Sister argued.

Sister Lucy also submitted before the Court that she had no place to go if she was forced to vacate the convent.

"I am a woman, a nun fighting for justice. It is important for my nunship that I continue to stay at this convent. I have been a nun for the past 39 years, do not throw me into the streets. I have nowhere else to go."

When the Court continued to stress that police protection cannot be granted if she continued to stay at the convent, the petitioner responded that the Court may withdraw the protection if it deems fit, but may not ask her to vacate the convent. It was also argued that she had filed a suit before a Munsiff court against the eviction notice issued against her and sought permission to stay till the disposal of her suit by the civil court.

"If the civil court directs me to move out, I will happily oblige. But till then, do not ask me to vacate the convent. I am only requesting this Court to wait till the civil court pronounces its verdict," she said.

The Court had then dictated that it would not look into her right to continue her stay at the convent in a petition seeking police protection. But in an oral statement, it observed as follows:

"Try to understand, this is for your own safety. You have made serious allegations against the vicar in your petition. You have admitted yourself that you are subjected to ill-treatment at the convent. This will only depreciate if you continue to stay at the convent any longer., especially since the Court cannot grant you protection. It's better to move out where I can grant you police protection."

Accordingly, the Court has reserved order in the matter.

During the last hearing earlier this month, counsel for Mother Superior of the Convent had produced the copy of the decretum issued by the Supremum Tribunal of Signature Apostolicae to argue that could not continue as a member of the FCC and that she was henceforth not entitled to wear the religious habit of the FCC or stay in the convent with religious sisters.