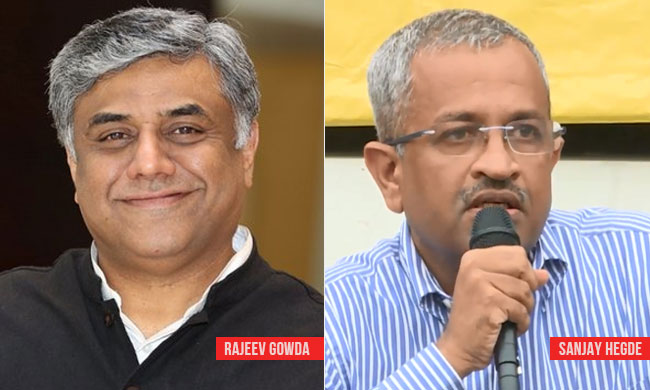 On November 28, Congress MP Rajeev Gowda requested the government during Zero Hour in Rajya Sabha, to frame guidelines on censorship by social media companies. "I would like to draw the attention to the censoring of user generated content by internet intermediaries which serve as social media platforms," he said. Delete In Zero Hour, I requested govt to frame guidelines on censorship...

"I would like to draw the attention to the censoring of user generated content by internet intermediaries which serve as social media platforms," he said.

The matter was raised in the backdrop of suspension of social media accounts of prominent lawyer Sanjay Hegde, journalist and Dalit activists, for posting innocuous content.

Very recently, citing depiction of "hateful imagery", Twitter had blocked Senior Advocate Sanjay Hegde's account for posting the picture of August Landmesser wherein he refused to the Nazi salute at a rally, when everybody around him was doing it.

Similarly, Twitter account of journalist Barkha Dutt was suspended for tweeting images of abusive messages that she had received.

Gowda asserted that lately, social media platforms had become the platforms for exchange of public opinion and discussion. Thus, it was pertinent to come out with guidelines to enforce the effective implementation of free speech.

"Twitter Hashtags, FaceBook posts, Youtube comments…these are the platforms now where the discussions take place…What we see here is that there is a structural problem out there with unregulated internet platforms and they need to bring in some guidelines so that we have a clear sense of what is allowed and what is not and, appeal mechanisms which will function properly. Otherwise, we are seeing free speech subject to private censorship," Gowda said.

Accusing the government of "indiscriminate" use of Section 69 of the Information Technology Act, 2000, Gowda said,

"There has been one report which says that the Indian Government sends the most number of take-down requests to a variety of internet intermediaries…on what basis these take-downs are taking place…these are all shrouded in secrecy Section 69 of the Information Technology Act is being used indiscriminately."

Section 69 empowers the government to intercept/ monitor/ decrypt any information through any computer resource, to maintain sovereignty or integrity of India, public order, etc.

He urged that the standards generally applicable to judicial review of State action should be applied in this context also, to regulate censorship by social media companies.

Earlier, Hegde had also urged the government to frame guidelines for social media censorship. In a letter addressed to the Minister of Information and Broadcasting, Ravi Shankar Prasad, he said,

"the right to disseminate and receive information is part of the right guaranteed under Article 19(1)(a) of the Constitution. Such a right will be rendered meaningless if private entities are allowed to infringe on fundamental rights, relying on their private ownership."