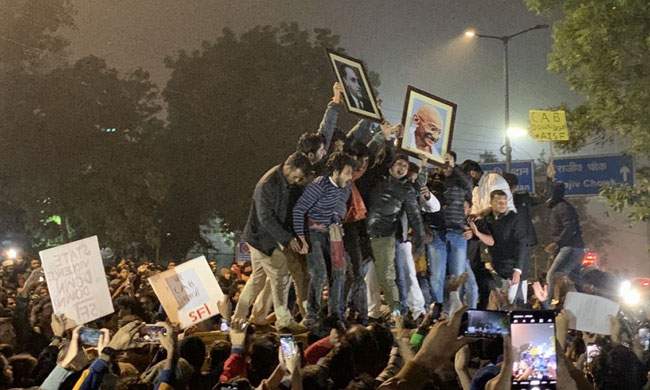 They have urged the courts to take cognizance and order an independent inquiry into the police acts against protesting students.

Extending their support to demonstrators across the nation, particularly Assam, Meghalaya, Tripura, Aligarh and Delhi, the students and alumni of GNLU said,

"The state violence against protesting students - physical assault, use of tear-gas shells, lathi-charge, and forceful entry into their university premises - is not only brutalisation of students but an attack on the autonomy of universities as non-militarised spaces for freedom of thought and expression. We demand an immediate end to all forms of violence against the protesting students and call for a judicial enquiry to fix accountability for the violence."

"The peaceful demonstration and gathering of citizens does not constitute a crime. The police action in the North East, Jamia Millia Islamia and AMU campuses is blatantly illegal under the constitution of India. The unbridled violence from those who are responsible to protect us and ensure law and order has a chilling effect on the democratic right of protest granted to the citizens of this country by its Constitution," the statement asserts.

The statement has been signed by over 500 alumni and around 100 students.

They also seek revocation of internet and social media black-out imposed across the country, specifically in Aligarh and North-Eastern India.

"We stand in solidarity with our fellow citizens in the north east, and students, faculty and staff of Jamia Millia Islamia and Aligarh Muslim University, and express our horror at this violent police and state action. With them, we affirm the right of citizens to peaceful protest and the autonomy of the university as a non-militarized space for freedom of thought and expression. The brutalization of students, the attack on universities and violent suppression of citizens voices is against the fundamental norms of a democratic society and contrary to the idea of India," the statement read.

The students, alumni and faculty of the Indian Law Society's Law College, Pune have condemned use of force against peaceful protestors, most of whom are students, in the following words,

"We remind the state machinery that under our constitutional framework, the right to peaceful protest is safeguarded as a fundamental right under Part III. It ought not to come as a shock to the ruling establishments in various states where the protests are on-going that a vote is not a solemn declaration of irrevocable acceptance for all times to come. A vote is not a bargain for silence without dissent.

We condemn the terrorizing of institutions of learning using the disproportionate weight of state machinery to stifle legitimate dissent. It is highly unbecoming of the state machinery to unleash violence on students. We stand in solidarity with the students who have suffered this indiscriminate brutality. We request the judiciary to take cognizance of these brutal acts by the state machinery and initiate an independent inquiry."

Over 400 NUJS alumni have criticized the Act for being violative of India's International obligations, apart from the Indian Constitution. They said,

"The collective impact of the CAA and NRC threatens the very fabric of India. It runs afoul of our constitutional principles, our obligations under the Universal Declaration of Human Rights and the cornerstone of international refugee law-- the principle of non-refoulement. We view the CAA and its implementation with a strong sense of foreboding--one that may polarise our beloved nation beyond repair."

"We also stand in solidarity with student communities and citizens across the country, who are peacefully voicing their opposition against CAA. We do not condone violence in protests, but we strongly condemn the brutality and disproportionate force used by law enforcement authorities in various parts of the country, including Uttar Pradesh and Delhi to muzzle dissent, particularly in educational institutions. We demand that those responsible for such atrocities be held accountable under law."

The alumni of NLUJ, while recognizing the importance of dissent in a democracy, condemned state-sponsored violence. Their statement read,

"Attempts to silence dissent through militarization, police excesses and communication shutdowns, eliminates individuals' right of participation in public affairs and the right to democracy - rights that the Constitution of India guarantees. While the Supreme Court of India that has held such fundamental rights of the protesting students hostage to conditions, we unequivocally condemn the resort to State violence and demand appropriate accountability unconditionally."

Expressing oneness with the students of Aligarh, Jamia, and other protesting students, they said,

"we recognize that dissent is the backbone of a democracy and that freedom of speech is one of the most cherished rights in a diverse and inclusive society. We therefore stand in solidarity with the protestors and students at Jamia Milia Islamia, Aligarh Muslim University, Dibrugarh University, Gauhati University, Cotton University, Assam, as well as students protesting the CAA,NRC and majoritarian thought in university campuses across India, and affirm the rights of peaceful assembly and the freedom of thought, speech and expression enshrined in the Constitution of India and various international human rights laws that bind India."

The students and alumni of the Tamil Nadu National Law University expressed their support for the student protestors in the following words,

"We believe that education forms an integral part in the self-actualization of an individual by fostering one's capacity for democratic debate and dissent. The continuous and systematic attacks on our educational institutions coupled with the aggressive tactics of isolation and violence adopted by the Indian government in suppressing people's fundamental right of democratic dissent is a deeply distressing development in the history of our nation. We observe these tactics in places such as Assam as well as in the silencing of various educational institutes across India such as JMI and AMU. We lean our support to all who are holding their ground against such injustice and stand hand-in-hand with them."

They also condemned the CAA, viewing it as an assault on the secular values of India and said,

"We also vehemently condemn the Citizenship Amendment Act, 2019, which interplays with the National Register of Citizens (NRC) to delegitimize the existence of our fellow Indians as citizens of this country. We believe that these policies attack the secular values of our nation which form the core of Indian democracy. The founders of the Indian Constitution out-rightly rejected the 'two nations theory' and struggled to build an India based on our collective identity as Indians rather than on any single religious identity. Basic humanity and morality dictates that we, as students and as members of the legal fraternity, join in this fight to preserve the dignity of the Indian Constitution and the values embedded within it by its framers."

Students and alumni from 19 Foreign Universities including Harvard And Yale have expressed solidarity with Jamia, AMU students.