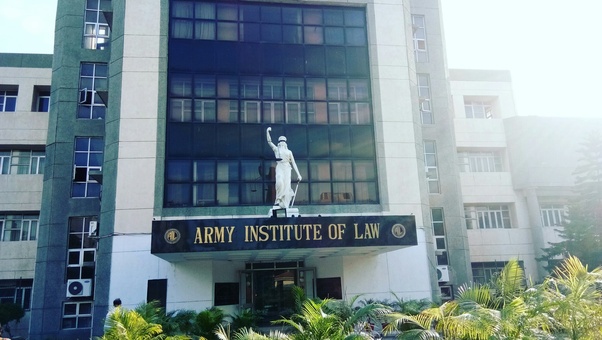 Agitating against "administrative inefficiencies" and "draconian" code of conduct, the students of the Army Institute of Law (AIL), Mohali started an indefinite protest last night. The protest is now trending on Twitter with the hashtag "Bahar Aao Baat Karo". "The Institute is run and managed on the basis of a Code of Conduct…which is draconian, infringes upon the basic freedoms...

Agitating against "administrative inefficiencies" and "draconian" code of conduct, the students of the Army Institute of Law (AIL), Mohali started an indefinite protest last night. The protest is now trending on Twitter with the hashtag "Bahar Aao Baat Karo".

"The Institute is run and managed on the basis of a Code of Conduct…which is draconian, infringes upon the basic freedoms of students, and leaves enough scope for administrative ambiguity and discretion," the official statement of the student community read.

The student community claimed that it had approached the Principal Dr. Tejinder Kaur and Registrar Col. Harbinder Singh and other dignitaries of the Western Command and the Army Welfare and Education Society, New Delhi, to voice their grievances but, in vain.

As per the press release, the students had forwarded a joint petition to the above named persons on October 4 but were yet to receive an acknowledgment of the same.

"Presently on 16th October, 2019 students are yet to receive an acknowledgment or a response from the concerned authorities. Anticipating a reaction from the students, the wardens and the Registrar tried to contain the students in their hostels by placing barricades outside the gate," the statement read.

The press release disclosed that the institute did not have a "democratically elected" student representative body and that students were "cherry picked" by the authorities.

"…The present student body consists of students who have been cherry picked by the authorities…The said student body has a very limited set of responsibilities, such as conducting the daily roll calls in the hostels, ensuring that students attend lectures in proper uniform, and act as personal henchmen to the wardens."

Moreover, the students were not allowed to air their grievances collectively and those, who approached the authorities individually were either shooed away or criticized instead of devising constructive solutions.

The students were also aggrieved by the absence of an organized Disciplinary Body and Internal Complaints Committee to look into instances of disciplinary violations and grievances regarding sexual harassment.

"There is an inherent lack of an organized Disciplinary Body to look into instances of disciplinary violations, it is constituted each time an offence takes place, in an arbitrary manner. Students are excluded from the process, are not allowed to appeal against the decisions, and are constantly harassed in order to expedite the process. There is a lack of an Internal Complaints Committee, with no mechanism to redress grievances regarding sexual harassment, discrimination an unfair treatment," the statement read.

Apart from the above, the agitation is fueled by arbitrary hostel rules, including curfew timings, dismal condition of the mess, etc.

In these circumstances, over 300 students that are standing up to administrative apathy have laid down their mattresses in the college campus and refuse to budge till their statement of relief is acknowledged and assented to. They stand in solidarity, seeking resolution of the aforesaid grievances.

All in all, the students have raised the following demands:

2. Justify the yearly hike in fees against the incumbent facilities'

3. Repeal of arbitrary provisions of the code of conduct;

4. Student feedback in the appointment of teachers and periodic feedback of already appointed teachers;

6. Upgradation of services provided in cafeteria and mess;

7. Inquiry regarding the conduct of the Female Wardens;

8. Clearly define the composition of the Disciplinary Board;

As per the press release, "The Institute, once a force to be reckoned with, has now been plagued by administrative inefficiencies, deteriorating quality of the teaching staff and a general sense of unreasonableness and apathy towards the students for some time now."

The students are now "braving the cold" in anticipation that their opinions will be heard in a "fair, just and equitable manner".