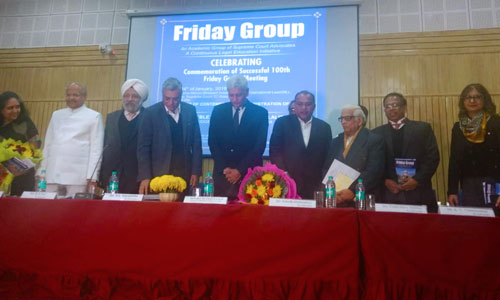 The event was organized by Supreme Court advocate G. Seshagiri Rao, at the Indian Society of International Law.

Supreme Court judge, Justice UU Lalit presided as the Chief Guest and spoke about the "Power of contempt in the administration of justice". He highlighted the seven phases of contempt law and its development by the judiciary.

Mr. Vinayagam spoke about the doctrine of American wife and the value of English letters, while Mr. Narasimha highlighted the intensive preparations done by various speakers before their Friday Group lectures. Mr. Vishwanathan requested Justice Lalit to consider organising paid lectures by judicial academies for the lawyers, as a part of continuing education.

Along with the souvenir, a 90 seconds anthem music of Friday group was also composed by Mr. V. Ramanan, and was inaugurated by Justice Lalit during the meeting.

About the Friday Group:

The Friday Group is an academic group of Supreme Court Advocates. Viewed as a continuing legal education initiative, the group began with 15 lawyers and has now grown to over 1000 lawyers.

The first meeting of the group was held on July 10, 2015 in Library-2 of Supreme Court of India Bar Association, and the first annual meeting was held on September 9, 2016 at the Indian Society of International Law. Several sitting and retired judges have since delivered speeches during various group meetings.

As the organiser, Mr. Rao maintains systematic registers of all the meetings with speaker's name, date and topic, as well as signatures of attending members. A WhatsApp group and an SMS group is also maintained for regular updates.

The group also has its own YouTube channel, where several of the speeches are uploaded.