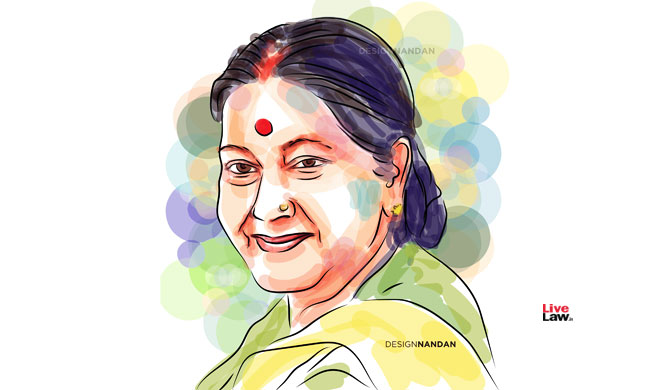 The Executive Committee of the Supreme Court Bar Association on Wednesday issued a statement mourning the passing away of Sushma Swaraj, the former Union Minister for External Affairs.

Sushma Swaraj, who had started practice of law in 1973,  was also an Advocate on Record at the Supreme Court. Her husband Swaraj Kaushal is a Senior Advocate and her daughter Bansuri Swaraj is an Advocate.

"The Executive Committee of SCBA, on behalf of all it's members, joins the entire nation in mourning the sad and untimely demise of Smt. Sushma Swaraj, the erstwhile External Affairs Minister of India, former Chief Minister of Delhi and our esteemed member.

Mrs. Swaraj was a virtuous, resolute and fearless leader, an articulate orator and a picture of simplicity, compassion and cultural values, who embodied the ideals cherished by our country. The void created by her demise would be difficult to fill. We express our sincere and heartfelt condolences to our members, Mr. Swaraj Kaushal, Senior Advocate and Ms. Bansuri Swaraj, Advocate and her entire family. May god rest her soul in peace and give strength to the bereaved family to bear this colossal loss".

The Executive Committee of AOR Association also expressed it's condolences on the demise of Smt. Sushma Swaraj.

"We express our sincere and heartfelt condolences to Mr. Swaraj Kaushal, Senior Advocate and Ms. Bansuri Swaraj, Advocate.
May God give strength to the bereaved family members to bear the irreparable loss".

According to doctors at AIIMS, New Delhi, she succumbed to cardiac arrest on the night of 6th August 2019. Swaraj will be cremated with full state honors today at Lodhi Crematorium, Delhi today.