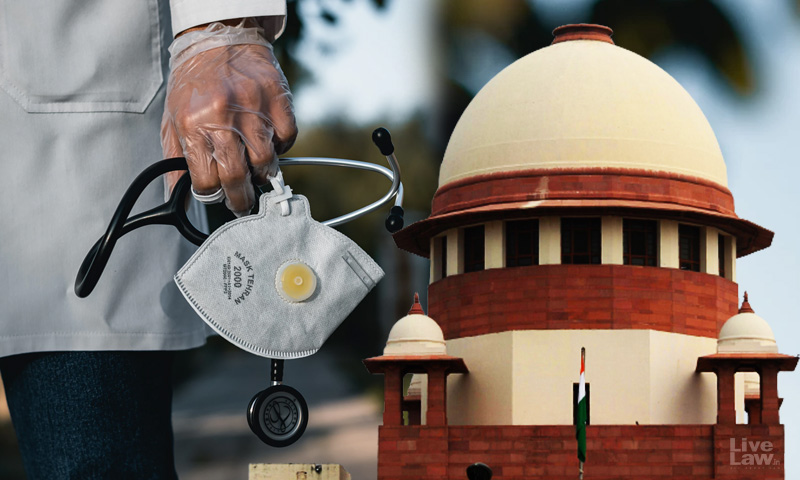 The Supreme Court on Tuesday granted three week's time to the National Medical Commission to file its reply in the plea filed seeking direction mandating the induction of Foreign Medical Graduates in the healthcare workforce of the country to augment the ailing healthcare system. The Bench has also granted one week's time to the petitioners to reply and file their rejoinder to...

The Supreme Court  on Tuesday granted three week's time to the National Medical Commission to file its reply in the plea filed seeking direction mandating the induction of Foreign Medical Graduates in the healthcare workforce of the country to augment the ailing healthcare system.

The Bench has also granted one week's time to the petitioners to reply and file their rejoinder to the Commission's affidavit, thereafter.

While hearing the plea filed by 3 Associations of Foreign Medical Graduates, a vacation Bench of Justice Indira Banerjee and Justice MR Shah noted that the petitioners are not pressing their prayer seeking exemption from the examination ( Prayer a)

The observation was made after Senior Advocate Kapil Sibal appearing for petitioners clarified that they are 'not seeking any exemption from examination'.

The Bench also expressed its disinclination towards allowing the prayer seeking reduction in the qualifying criteria for those Foreign Medical Graduates that took FMG examination on 4th December 2020 to bring it at par with that of the NEET PG Examination 2020.

"See prayer C also. How can that be done?" Justice Shah asked.

"They have done that with NEET too. Let them file their reply." Sibal said.

"How can we issue mandamus to reduce qualifying criteria?" Bench asked.

Senior Counsel Sibal clarified that he is not asking the Court to issue Mandamus, but only to ask the Respondents to consider it and take a view as a policy matter.

Advocate Gaurav Sharma appearing for National Medical Commission responded to Mr Sibal's submissions stating that while in NEET, there is a provision for reduction of percentile, the same is not available in this exam.

While seeking a time of three weeks to file the affidavit, Sharma stated that considering the students have done their medical courses from Russia, China, etc, hence the Commission is unaware of their level of qualification.

"There are two categories of people, one Russian Students who sat for exam and passed it and have been registered but not being assigned any job. Another category, is those who have passed it but have not been granted internment." Sibal submitted.

Mr. Sibal further stated that for these two categories relief has to given, without any dispute as the students have already cleared the examination. The Bench however noted that the Commission will have to explain everything through an affidavit.

The Bench also adjourned to June 18th, another plea filed seeking postponement of exam for Foreign Medical Graduates scheduled to happen on June 18th. (Olak Nobeng and Ors vs National Board of Examination)

The Bench further directed that the Delhi High Court's order dismissing an application seeking the postponement of the Foreign Medical Graduate Exam, 2021, (FMGE) be placed on record before the Apex Court.

The direction was passed after Adv Gaurav Sharma informed the Court that after moving Supreme Court, a petition was also filed by the Association before Delhi High Court, seeking postponement of these exams which was rejected by a single Bench of the Court.

Senior Advocate Hegde submitted that the petitioner is a Foreign Medical Graduate from Itanagar who will have to travel to Guwahati for exam, along with others who are similarly placed.

In response to Court's observation that the order should be placed on record so the matter could be taken up on Friday, Hegde informed the Court that the exam is scheduled to be held on June 18th.

"Nothing can be done then, at last moment. We have to read the Order. High Court has dismissed with reasons, place that on record." the Bench observed.

The Bench had earlier adjourned the plea on Friday, as it could not take up the case due to paucity of time. The plea bas sought directions to Union of India and the National Medical Commission.

" I am not part of the association, i am fromNorth east, I have a problem and I'm bring it to the Court's notice. The point is Either I can get some relief today or it will be difficult." Hegde said.

"I don't think we can stop examination in individual cases, that too after the High Court has declined" Justice Banerjee stated

The Bench had however indicated that it was not inclined to grant exemption from taking exams. The observation was made with reference to the relief of a one-time exemption being sought be petitioner associations for their members, and for all other FMGs eligible to take the FMG Examination, from taking such exam, and to be inducted into the COVID-19 workforce in order to augment the health infrastructure of the country.

The petition has sought directions to the Union of India to direct all states to immediately induct all the Foreign Medical Graduates within their jurisdiction into the COVID-19 healthcare workforce, and to provide facilities to such graduates at par with that provided to MBBS graduates with commensurate experience from India who are a part of the workforce.

The petitioners have also sought an alternative relief of reduction in the qualifying criteria of FMGs who had taken the FMGE December 2020, and to be brought at par with that of graduates who took the NEET Postgraduate examination of 2020.

While highlighting an unprecedented demand of doctors and healthcare professionals in wake of the Covid 19 pandemic, the Petitioners have approached the court seeking "enforcement of their fundamental right to practice their profession, as also seeking to be placed at par with medical graduates who have obtained their primary medical qualification in India" in light of the Covid 19 pandemic.