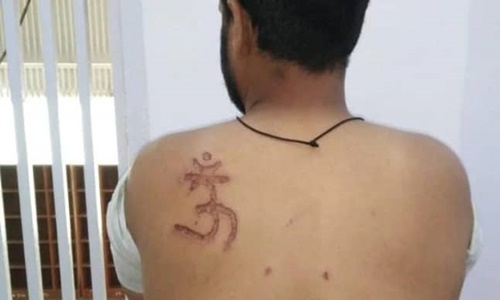 A Delhi Court ordered for inquiry after a Muslim under trial prisoner alleged that Jail Superintendent had "burn imprinted" symbol 'Om' on his back and has also deprived him of food for two days, reports The Wire.

Nabbir alias Popa, an under trial prisoner, is lodged at Jail No. 4 of Tihar. His Counsel Jagmohan has submitted before Magistrate Richa Parihar that Nabbir has been subjected to cruelty and inhuman treatment in the jail by the Jail Superintendent.

Nabbir had informed about the incident to his family member who informed the counsel about the same and Counsel had accordingly moved application after meeting Nabbir in Jail on 16th this month.

A #Delhi court has called for an inquiry & explanation from the DGP, Prison after a #Muslim undertrial is burn-stamped with ॐ, allegedly by a Tihar jail superintendent. pic.twitter.com/eXiVPWMPbS

Court ordering the immediate inquiry noted that the allegations raised by accused are of serious nature and required immediate intervention. It has issued notice to DGP, Prisoner, Head Quarter, Tihar Jail No.4, New Delhi to get the medical examination of accused Nabbir conducted with the immediate effect and has also asked for enquiry report regarding the burn imprinted 'Om' remark on the person of the accused.

Court has directed for collection of necessary CCTV footage and has asked for statement of other inmates in this regard. It has further directed that the necessary arrangements be made to ensure the safety of accused in Jail.