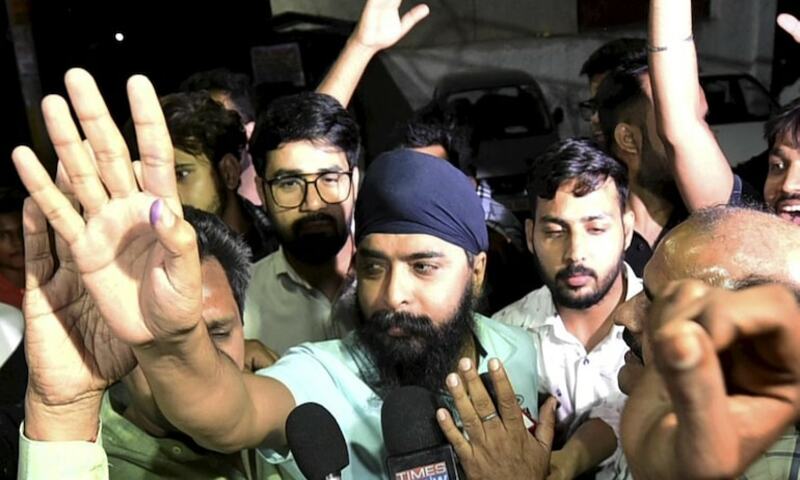 The Punjab Police has moved the Delhi High Court seeking quashing of the FIR registered by the city police, in connection with the arrest of BJP leader Tajinder Pal Singh Bagga, along with subsequent proceedings and orders passed by the Trial Courts here.

The plea will be heard on Tuesday by a single judge bench comprising of Justice Anu Malhotra.

Bagga was arrested by the Punjab Police earlier this month, however, with the intervention of the Haryana Police and on the strength of a Delhi Court's order, Delhi Police was able to bring Bagga back to Delhi in the evening after taking him under their Custody from Thanesar police Station, Kurukshetra (Haryana).

The plea seeks quashing of FIR 327 of 2022 registered at Janakpuri police station and also challenges the orders passed by city Court dated May 6, 2022 vide which search warrants were issued for production of Bagga and he was released from the custody.

The plea avers that the Punjab Police had effected arrest of Bagga who had been accused of fuelling disharmony, unrest and ill will between different religious groups in an FIR registered under sec. 153(A), 505, 505(2), 506 of IPC. According to the State of Punjab, Bagga had been served 5 notices to join the investigation, but he defied the same and continued issuing provocative statements.

Accordingly, the plea states that two teams of the Punjab Police had reached Delhi on May 6 for arresting Bagga. While one of the teams reached Bagga's house and effected his arrest, the plea argues that the other team, which had gone for informing the local police about the arrest, was illegally detained at the Janak Puri Police Station, thereby refusing to cooperate with Punjab Police.

In this backdrop, calling it a false and fabricated FIR, the plea alleges that the Delhi Police officials had registered the impugned FIR under sec. 452, 365, 342, 392, 395A and 34 of IPC in order to "set to naught the arrest and investigation carried out by Punjab Police against Bagga."

"The Delhi police officials also obtained a search warrant emanating from the said FIR by concealing the relevant and material facts of lawful arrest of the said accused and by using such erroneous search warrant immediately contacted Haryana Police to restrain and stop the Punjab Police who were taking the lawfully arrested accused person to produce before the concerned 6 Magistrate. The Punjab Police Team of 12 members were detained by the Haryana Police and was deprived of the lawful custody of the said accused, which was later on handed over to Delhi Police despite producing all the legal documents pertaining to lawful arrest," the plea adds.

It adds "Therefore, the illegal means and procedure used by the Delhi Police Officials along with Haryana Police Officials by using false and concocted FIR No. 327 of 2022 which was used to obstruct the Punjab Police Officials from duly discharging their duty and rather in connivance assisted the accused in releasing him from the lawful custody of Punjab State police officials under the garb of fabricated story of accused being kidnapped by unknown persons. The Delhi Police conduct is totally dubious, illegal, unwarranted, mala fide, unauthorised, who not only misled the Hon'ble Court by assisting the accused but also concealed the factum that the person whom they are presenting as victim in the said FIR is the accused and has been arrested by the Punjab Police in case FIR No. 18/2022 registered at Punjab State Cyber Crime Police Station, SAS Nagar, Under Section 153(A), 505, 505(2), 506 IPC."

The plea further states that the search warrants which got issued by Bagga's father vide order dated 6.5.2022 are liable to be set aside by virtue of which Bagga's custody was obtained with the help of Haryana Police.

"In fact, the Haryana Police was conveyed the wireless message before 12.00 noon to detain the Punjab Police midway at Kurushetra, Haryana, who were on their way of producing the said accused before the Ld. Magistrate at Mohali in order the effectuate the mandate of Section 57 read with 167 Cr.P.C and the false complaint was filed purportedly by the father of the accused after the wireless message alleging that some unknown persons had kidnapped the said accused person. The team of Punjab Police who arrested the accused was illegally detained at Kurukshetra, Haryana for more than three hours and order of search warrant came to be passed later on," the plea states.

The plea thus argues that the impugned FIR was lodged by Delhi Police illegally and with absolute mala fide in connivance with Bagga's father, only with a view to protect and shield him from being lawfully arrested by the Punjab Police, therefore any legal proceeding emanating from the said FIR is in itself erroneous and non est.

"Because the impugned actions of the Delhi Police are purely politically motivated, illegal and in gross abuse of process of law. The impugned orders and FIR are manifestly attended with mala fide intentions and proceedings are maliciously instituted with an ulterior motive for wrecking political vendetta by using statutory powers and authority as a tool to disrupt lawful and legal processes initiated by the police machinery of State of Punjab against the accused/respondent No. 3," it adds.

The case against Bagga and a brief background

The FIR against him was registered on April 1 (at the instance of AAP leader Sunny Ahluwalia) in connection with his remarks made on March 30, when he was part of a BJP youth wing protest outside the residence of Delhi Chief Minister Arvind Kejriwal. Several tweets made by him also form part of the allegations.

On May 6, the Punjab Police arrested Bagga in morning, however, with the intervention of the Haryana Police and on the strength of a Delhi Court's order, Delhi Police was able to bring Bagga back to Delhi in the evening after taking him under their Custody from Thanesar police Station, Kurukshetra (Haryana).

Soon thereafter, Bagga moved the High Court and in a hearing conduct at midnight, the High Court ordered the Punjab State to not take any co-ercive action againt him till May 10.