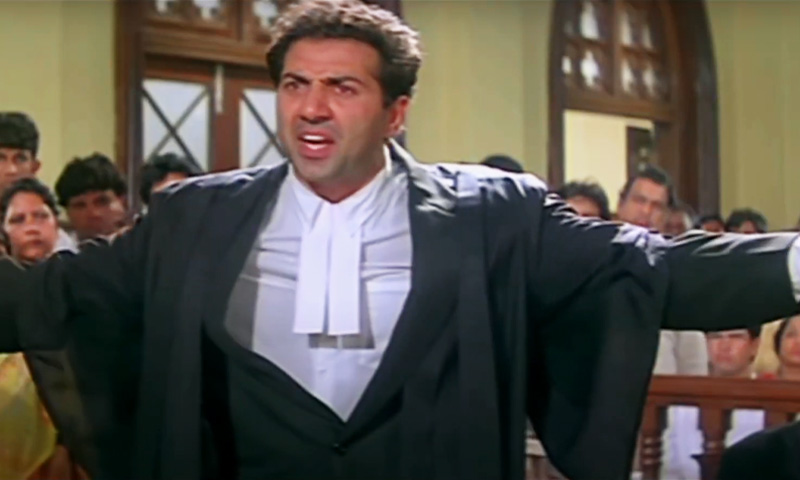 Sunny Deol, a still from the Movie Damini

The event allegedly happened in Courtroom number 66 in Delhi's Karkardooma Court complex on July 17 as the man alleged that the court was only giving dates for the hearing, thus delaying the process of justice.

The Man has been identified by the Police as Rakesh, a Delhi resident whose case has been reportedly pending before the Karkardooma court since the year 2016.

Following the ruckus, the Courtroom staff raised an alarm and thereafter the police arrested him, and he was presented before a magistrate, who remanded him to judicial custody.

Delhi Police has booked Rakesh under section 186 (voluntarily obstructs any public servant in the discharge of his public functions), Section 353 (assaults or uses criminal force to any person being a public servant), Section 427 (mischief), and Section 506 (criminal intimidation).

Sunny Deol, who is playing the character of a frustrated advocate in the movie, vents out his anger at the regular adjournments sought by the opposing counsel (played by late Amrish Puri) while screaming Tareekh pe Tareekh.

During the course of hearing in the movie, when the Judge asks him if he should give another date in the matter, Deol delivers a monologue and says:

"...today, you're giving a date again. Before that date, some truck will come and run down on me and the case will be declared as a road accident. And then what? You will give a date again. But before that date, Damini will be announced crazy and be thrown in the mental asylum. And this way, there will be no one to fight for the truth, nor will there be anyone to ask for justice. All that will be left is a date. And this has been going on forever, My Lord. Dates by dates, dates by dates. That's all we have got until now in place of justice. All we get is a date. The lawyers, have used these dates against justice like a weapon, My Lord."