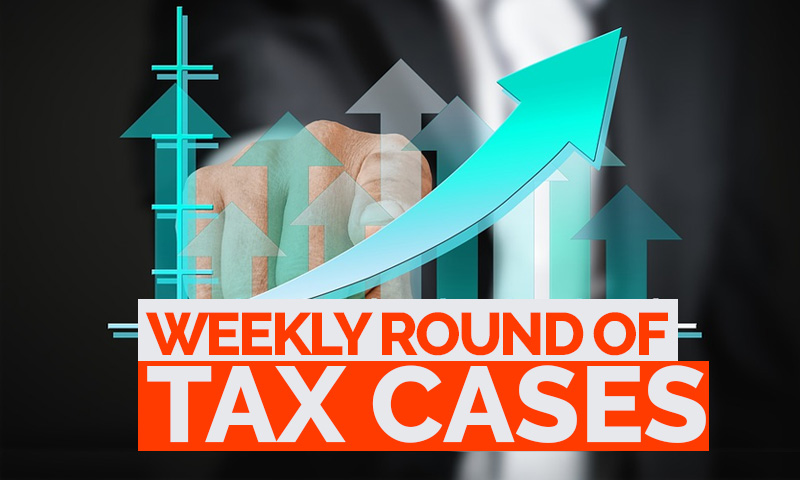 Immunity Under Income Declaration Scheme Available Only To The Declarant; Can't Be Extended To Another Assessee : Supreme Court

The Supreme Court has found fault with a Gujarat High Court judgement for extending the immunity under the "Income Declaration Scheme" (IDS) to an assessee who was not the declarant under the scheme.

﻿1. Non Specification Of Penalty Provisions In Penalty Notice And Denial Of Immunity; Delhi High Court Holds That Assessee Is Eligible For Immunity, Says Tax Payer Should Be Incentivised

The Delhi High Court has ruled that the action of income tax authorities denying the benefit of immunity from penalty under Section 270AA of Income Tax Act to the assessee on the ground that penalty was initiated under Section 270A for misreporting of income is arbitrary since the penalty notice issued by the authorities failed to specify the limb under which the penalty proceedings were initiated.

The Bench, consisting of Justices Manmohan and Dinesh Kumar Sharma, held that since the authorities had failed to specify whether action was taken against the assessee for "underreporting" or "misreporting" of income under Section 270A of the Act, the order of the income tax authorities denying immunity from imposition of penalty was erroneous and arbitrary.

2. Disputed Tax Demand, Pre-Condition To Deposit 20 % Of The Disputed Tax For Stay Of Recovery Proceedings, Can Be Relaxed In Appropriate Cases: Delhi High Court

The Delhi High Court has ruled that requirement of payment of twenty per cent of disputed tax demand is not a pre-requisite in all cases for putting recovery of demand in abeyance during the pendency of the first appeal.

The Bench, consisting of Justices Manmohan and Dinesh Kumar Sharma, held that the order of the income tax authority disposing of assessee's application for stay against recovery of disputed tax demand without considering the issues of prima facie case, balance of convenience and irreparable injury to the assessee was a non-reasoned order.

The Madras High Court bench of Justice C. Saravanan refused to grant a refund of the amount lying in the assessee's electronic cash ledger on the grounds that there were serious allegations against the assessee for having an availed fraudulent input tax credit (ITC) in the electronic credit ledger on the strength of a bogus and fictitious input tax invoice for discharging GST liability with no supply.

The Madras High Court has ruled that prosecution under Section 276C (2) of the Income Tax Act for wilfully attempting to evade payment of tax cannot be initiated against an assessee who merely defaults to pay tax on time under the Act.

The Single Bench of Justice N. Sathish Kumar held that in the absence of mens rea to avoid payment of tax, a "wilful attempt" to evade tax cannot be attributed to assessee in order to prosecute him under Section 276C (2).

Non Release Of Seized Documents, Based On Pendency Of The SLP In The Supreme Court By IT Department, Is Illegal: Kerala High Court

Case Title: Udaya Sounds versus Principal Commissioner of Income Tax and Others

The Kerala High Court has ruled that the income tax department is not authorized to retain the title deeds seized by them under Section 132 of the Income Tax Act on the ground that a Special Leave Petition filed by the Assessee against the assessment order is pending before the Supreme Court.

The Single Bench consisting of Justice Bechu Kurian Thomas held that since the Income Tax Act confers the tax authorities the power to retain seized documents beyond the assessment order only till proceedings under the Act are completed, therefore documents seized by the department cannot be retained by them on the ground of pendency of Special Leave Petition (SLP) since an SLP filed under Article 136 of the Constitution of India cannot be regarded as a proceeding under the Income Tax Act.

The Gujarat High Court bench of Justice Gita Gopi has granted bail to the accused of fraudulently availing the input tax credit (ITC) as the department has attached the immovable properties, which were much beyond the alleged GST evasion.

The Gujarat High Court bench of Justice J.B. Pardiwala and Justice Nisha M. Thakore has ruled that the dealer should not be forced to pay a hefty price for the cancellation of the GST registration for the chartered accountant's mistake.

The Gujarat High Court bench of Justice J.B. Pardiwala and Justice Nisha M. Thakore has condemned the act of the department for attaching the personal immovable properties of the director even though the tax dues were settled under the Tax Resolution Scheme.

﻿4. Gujarat High Court Rejects Application Seeking Benefits And Interests On The Ground Of Delay Under Contempt Of Courts Act

Averring that there was no delay in making payment of pensionary benefits as alleged by the Appellants, the Gujarat High Court has refused to interfere in the Letters Patent Appeal seeking Respondent authorities to pay all the consequential pensionary benefits and 18% interest on delayed payment.

The Rajasthan High Court bench of Justice Narendra Singh Dhaddha has refused to grant bail to the director of a company who was allegedly involved in goods and service tax (GST) evasion worth Rs. 869 crores. The court noted that the Supreme Court in its various decisions held that an economic offender should not be dealt with as a general offender because economic offenders run a parallel economy and they are a serious threat to the national economy.

The Rajasthan High Court bench of Justice Sandeep Mehta and Justice Vinod Kumar Bharwani has allowed the Input Tax Credit (ITC) under GST in GSTR-3B Return as FORM GST ITC-02A was not available on the GSTN Portal at the time of its insertion.

Survey Not Disputed By The Partner Of The Firm Who Was Present - Can't Question Later: Allahabad High Court

The Allahabad High Court bench of Justice Piyush Agrawal has ruled that once the partner of the firm was available at the time of the survey, who must have signed the survey report, he could very easily request to correct the entries or refuse to sign the survey report, if it was not recorded as per his statement.

Case Title: Subhash Chandra Versus Commissioner Of Income Tax, Indore And Others

The Madhya Pradesh High Court has ruled that income disclosed under Voluntary Disclosure Scheme cannot be included with the regular income declared under Income Tax Act as the tax paid under the Scheme cannot be refunded at any cost.

The Bench, consisting of Justices Vivek Rusia and Amar Nath Kesharwani, has held that tax paid under Voluntary Disclosure Scheme and tax paid under Income Tax Act are different and there cannot be any adjustment between them. The Bench added that an assessee cannot be permitted to disclose part of his income under Voluntary Disclosure Scheme and other part of his income in an income tax return filed belatedly under the Act.

Issue Of Notice Of Hearing Is A Statutory Requirement Under Section 75(4) Of CGST Act Before Imposition Of Tax Or Penalty: Andhra Pradesh High Court

The Andhra Pradesh High Court recently allowed the writ petition by an assesse as there was no notice given to him before contemplating to pass an adverse Tax Assessment Order which is violative of Section 75(4) of CGST Act, 2017.

Case Title: Exide Industries Limited Versus The State Of Jharkhand And Others

The Jharkhand High Court has ruled that Input Tax Credit can be denied on Inter-State sale or transfer of stock under Section 18(8)(ix) of the Jharkhand Value Added Tax Act, 2005 only when some manufacturing activity is undertaken by the assessee in the State.

The Bench, consisting of Justices Aparesh Kumar Singh and Deepak Roshan, has held that in a taxing statute there is no room for intendment and therefore Section 18(8)(ix) cannot be stretched to cover persons who are not manufacturers so as to deny them Input Tax Credit under the Act.

The Delhi Bench of ITAT, consisting of Amit Shukla (Judicial Member) and B.R.R. Kumar (Accountant Member), has ruled that performance guarantee commission received by an assessee from its foreign Associated Enterprise is not its business income under the Double Taxation Avoidance Agreement (DTAA).

The ITAT thereore allowed foreign tax credit under Income Tax Act, 1961 to the assessee against the tax withheld under the Singapore Income Tax law on the commission paid by a Singapore Entity.

The Bangalore Bench of ITAT has ruled that Foreign Tax Credit cannot be denied to the assessee for delay in filing Form 67.

The Bench, consisting of members Beena Pillai (Judicial Member) and Chandra Poojari (Accountant Member) has ruled that Rule 128 of the Income Tax Rules which requires the assessee to submit Form 67 before filing the income tax return for claiming Foreign Tax Credit (FTC) is directory in nature and not mandatory, thus FTC cannot be denied for delay in filing Form 67.

The Gujarat Authority of Advance Ruling (AAR) has ruled that the 18% GST is applicable on supply of a functional Cattle Feed Plant, inclusive of its Erection, Installation and Commissioning and related works.

﻿2. Payment Of Equated Yearly Instalments And Interest On Delayed Payment Is Exigible To GST: Telangana AAR

The Telangana Bench of Authority for Advance Ruling, consisting of members B. Raghu Kiran and S.V. Kasi Visweswara Rao, has ruled that payment of Equated Yearly Instalments made under Annuities Model, including interest on delayed payments made to a contractor, is exigible to GST.

﻿3. Transportation Of Parcels By GSRTC In Its Buses Attracts 18% GST: AAR

The Gujarat Authority of Advance Ruling (AAR) consisting of Atul Mehta and Arun Richard has ruled that 18% GST is payable on the transportation of parcels by the Gujarat State Road Transport Corporation (GSRTC) in its buses.