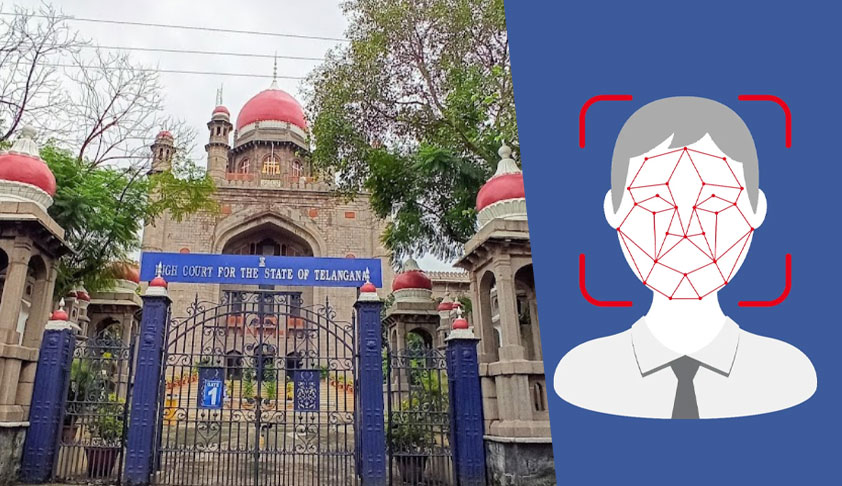 The Telangana High Court today issued a notice to the Telangana State Government in a Public Interest Litigation (PIL) plea filed challenging the deployment of Facial Recognition Technology (FRT) in the State of Telangana.The notice has been issued by a bench of Chief Justice Satish Chandra Sharma and Justice Abhinand Kumar Shavili on the PIL filed by a social activist from...

The Telangana High Court today issued a notice to the Telangana State Government in a Public Interest Litigation (PIL) plea filed challenging the deployment of Facial Recognition Technology (FRT) in the State of Telangana.

The notice has been issued by a bench of Chief Justice Satish Chandra Sharma and Justice Abhinand Kumar Shavili on the PIL filed by a social activist from Hyderabad, S. Q. Masood, arguing that the deployment of FRT is not backed by law, is unnecessary, disproportionate, and is being done without any safeguards in place to prevent misuse.

Background of the PIL

The petitioner moved the High Court with his PIL after he was stopped by 8-10 police officers in Hyderabad while he was returning home from work in May 2021 and he was directed to remove his mask even though the pandemic was ongoing, and Hyderabad was reporting a large number of cases.

The PIL states that he was asked to remove his mask because they wanted to take his photograph, and when Mr. Masood refused, they captured his picture anyway.

Thereafter, concerned with how his picture may be used, and to find out the legal basis of the actions of the police officers, Mr. Masood addressed a legal notice to the Police Commissioner of Hyderabad, however, when he did not receive any answer, he moved to the High Court.

The PIL (drawn with the legal assistance provided by the 'Internet Freedom Foundation') states that Telangana is the most surveilled place in the world, and the State Government had been deploying Facial Recognition Technology ('FRT') without any legal basis for a range of purposes including but not limited to law enforcement, supplying essential services, and elections.

Against this backdrop, the PIL has been filed challenging the deployment of Facial Recognition Technology ("FRT") by Respondents in State of Telangana and specifically in Hyderabad for various law enforcement and welfare purposes on various grounds including the violation of right to privacy, rule of law and equality.

Specifically, the Petitioner has challenged the deployment of Facial Recognition Technology on the ground that such deployment is made:

The PIL avers that the Supreme Court in K.S. Puttaswamy v. Union of India & Ors (2017) 10 SCC 1, held that the government cannot restrict the right to privacy unless such restriction is based on law, and it is necessary and proportionate but the use of FRT restricts privacy as by way of biometric data it is used to surveil the activities of individuals.

However, the PIL adds, in the State of Telangana, no law empowers the executive to use FRT. Moreover, it is unclear what is the objective of the deployment, and considering that most FRT technologies are inaccurate, such deployment is not suitable to achieve any objective.

The PIL states that even though the State of Telangana does have the power to deploy FRT, there must be procedural safeguards to ensure that the power is exercised in a fair, reasonable, and just manner.

The PIL argued that the deployment of FRT in Telangana is not targeted or specific or narrow and rather it is used for mass surveillance and is violative of the fundamental rights of the residents of the State of Telangana.

The State of Telangana must demonstrate that there is 'probable or reasonable cause' for deploying FRT which has the effect of mass surveillance, the PIL contends.

The bench has issued notice to the Telangana State Government after hearing submissions from Mr. Manoj Reddy who represented Mr. Masood in court. The case will now be taken up on 15th January 2022. IFF provided legal support in the drafting of the petition (more details here: https://internetfreedom.in/telangana-high-court-issues-notice-in-indias-first-legal-challenge-to-the-deployment-of-facial-recognition-technology/).