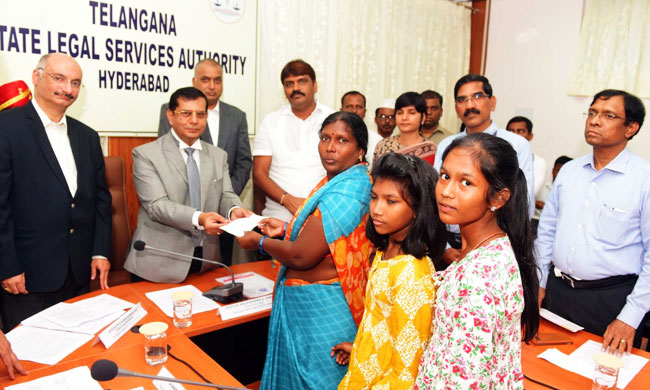 In a special program held in the premises of the Telangana High Court on Tuesday, Chief Justice Raghvendra Singh Chauhan handed over compensation cheques worth Rs. 75 lakhs to bereaved families of nine deceased manual scavengers.

The program was held in the presence of Justice MS Ramachandra Rao, Justice A. Abhishek Reddy and Mayor Bonthu Ram Mohan.

The move comes in line with the Prohibition of Employment as Manual Scavengers and their Rehabilitation Act, 2013, which was enacted after the Supreme Court asked the Centre to abolish manual scavenging.

Pursuant to the Safai Karmchari Andolan, Chief Justice Chauhan, who is also the patron-in-chief of the Telangana State Legal Services Authority, had directed the TSLSA to collect the details of all deceased karmcharis. Subsequently, the TSLSA contacted the Greater Hyderabada Municipal Corporation and the Hyderabad Metro Water Supply and Sewage Board, which sanctioned the compensation.

The compensation cheques, granted to nine families whose members died in either manholes, drains or septic tanks between 2003 to 2017, ranged between Rs. 8 lakhs to Rs. 10 lakhs. Considerably, the Supreme Court had in Safai Karamchari Andolan & Ors. v. Union of India & Ors., WP (C) No. 583/2003, directed,

…compensation of Rs. 10 lakhs should be given to the family of the deceased."

Recently, the Punjab and Haryana High Court had also, taking suo moto cognizance of the continuing inhuman practice of manual scavenging, issued a series of mandatory directions to bring it to an end.