"The Tone And Tenur Of The Speech Might Have Been Aggressive But His Speech Didn't Directly Incite Violence": NIA Court Grants Bail To Activist Akhil Gogoi [Read Order] 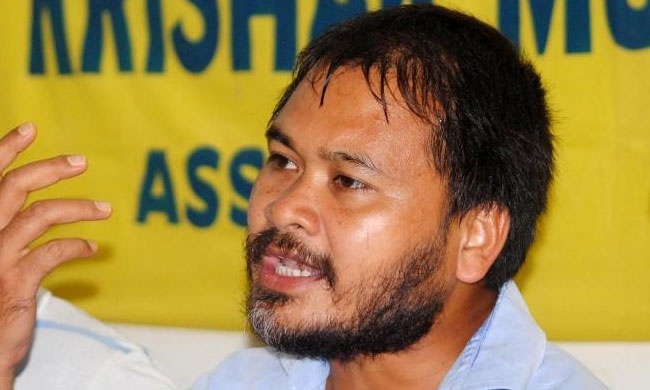 The Special NIA Court (Guwahati) has granted bail to Activist Akhil Gogoi in connection with NIA investigated case no. RC-01/2020/NIAGUW (Chabua Police Station Case).It was alleged that Akhil Gogoi had led a crowd of 6000 persons and caused economic blockade and pelting of stones, one of hit the face of the informant and injured him grievously.It was also alleged that the mob led by Akhil...

It was alleged that Akhil Gogoi had led a crowd of 6000 persons and caused economic blockade and pelting of stones, one of hit the face of the informant and injured him grievously.

It may be noted that Section 16 belongs to Chapter IV of the Act. The Subjects areas of this penal section of the UA(P) Act is related to Punishment for a "Terrorist act". While Section 15 of this act defines what a "Terrorist Act" is.

Primary question before the Court

Primarily, the Court had to ascertain as to whether the materials stated in the case diary and charge sheet against Akhil Gogoi, if believed, make out a prima facie case against him especially under section 15/16 of the UA(P) Act.

Further, whether the materials stated in the charge sheet upon investigation find some support from the materials in the case diary.

Finally, the Court needed to ascertain as to whether there was anything in the existing materials, which make the Accusations against the accused wholly improbable.

This exercise was to be done in keeping with the formula enunciated in Jayanta Kumar Ghosh v. NIA, 2010 (4) GLT 1's Judgment with regard to the interpretation to the proviso to Section 43 (D) (5) of the UA(P) Act

Legal Analysis done by the Court

The Court considered the fact that in a case where the penal provisions include sections falling under Chapter IV and/or VI of the UA (P) and also penal sections punishable with life or death, then the grant of bail, apart from being subject to the standard limitations governing grant of bail, would also be subject to the following 2 limitations:-

(b) The bar of Section 437 CrPC pertaining to an offence punishable with death or imprisonment of life, subject to the exceptions incorporated therein – if the accused is sick or infirm or women or below 16 years.

"(5) Notwithstanding anything contained in the Code, no person accused of an offence punishable under Chapters IV and VI of this Act shall, if in custody, be released on bail or on his own bond unless the Public Prosecutor has been given an opportunity of being heard on the application for such release: Provided that such accused person shall not be released on bail or on his own bond if the Court, on a perusal of the case diary or the report made under section 173 of the Code is of the opinion that there are reasonable grounds for believing that the accusation against such person is prima facie true."

Further, as per the statutory provision, the test of Section 43 (D) (5) provision of the UA(P) Act has to be ascertained on the basis of the materials in the case diary and charge sheet.

In this regard, the Court noted that, it has been reiterated by Full Bench of Gauhati High Court in Rojen Boro v. NIA 2016 (4) GLT (FB) 803, that the legislature has prohibited consideration of any material beyond the case diary or the report made under section 173, CrPC for consideration of Bail.

Thus, the Court noted, in the scheme of things, if the accused is facing prosecution under penal provision falling under Chapter IV and/or Chapter VI of the UA(P) Act, first the court has to determine on the basis of the materials in the case diary and/or charge sheet, as to whether there are reasonable grounds for believing that the accusations against the said accused are prima facie true, only if this test is passed in favour of the accused by holding that there are no such reasonable grounds for believing the accusations to be prima facie true, can the court consider the other aspects of the merit of the bail prayer, including the restrictions under section 437 of CrPC, subject to the other standard limitations applicable to a bail petition.

Further, the Court said, this is because, if the aforesaid test is not passed in favour of the accused, by holding that there are reasonable grounds for believing the accusations to be prima facie true, then the Court would be barred from granting bail to the accused and it would in a way be academic and futile exercise to go into the other aspects of the merit of the bail prayer of the accused.

The Court further analysed the case of Jayanta Kumar Ghosh, the court was of the considered view that the para 76 and 77 of the Judgment lay down the basic formula regarding the interpretation of the proviso to Section 43 (D) (5) of the UA(P) Act. Therefore, the said basic principles are summarized hereunder:-

(1) The special court is required to examine the materials, collected during the investigation, assuming the same to be true and if, such materials, on such examination, and consideration, are found to make out a case against the accused, the special court has to determine if there are any such things in the materials, so collected, which would make the case, which has been made out against the accused, as a wholly improbable case

In light of these principles, Court examined the case diary and the charge sheet with regard to the Accused Akhil Gogoi, to form an opinion as to whether there are or there are not, reasonable grounds for believing that the accusations against Akhil Gogoi (A-1) are prima facie true.

Facts analysed by the Court

It was also deduced by the Court that Akhil Gogoi apart from giving aggressive or the provocative speech might not have directly incited violence, but he did not do anything to dissuade the crowd from vandalising, after they started doing so.

It also appeared to the Court that while stone pelting was being done, he continued addressing the Crowd.

The Court further analysed as to whether the omissions and commissions of the accused Akhil Gogoi on the aforesaid lines would make him liable for an act of terrorism within the meaning of Section 15 of the UA(P) Act.

The Court further observed that if the decision of the Terrorist Act as defined under Section 15 of the said act has to be seen in a particular set of facts, it should be shown that the prescribed illegal activity was done with any or more of the stipulated intention(s) – such as threatening the unity, integrity, security, the economic security of India or threatening the Sovereignty of India or striking terror in the people or a section of the people.

"Apart from materials about A-1 (Akhil Gogoi) delivering the provocative speech, there are no sufficient materials including photographs etc. About A-1 actually leading violent mobs and/or handling weapons. The Stone pelting which caused the unfortunate injuries on the informant was done so by someone from the crowd which got agitated in the context of the speech delivered by A-1 on the issue of CAA"

"Considering the Content of the speeches and the statement of the witnesses about provocative speech, it appears that the tone and tenor of the speech might have been aggressive on the much-debated issue of CAA, rather than the speech directly inciting violence"

Therefore, from the aforesaid deduction, the Court of the view that it cannot be said that there are reasonable grounds for holding prima facie (for the purpose of adjudicating this bail petition) that the accused is guilty of committing a terrorist act within the meaning of Section 15 of the UA(P) Act which is punishable under Section 16 the Act.

Importantly, the Court observed that though some of the penal sections under which Akhil Gogoi is being prosecuted at this stage, is punishable up to life imprisonment as revealed by the information from the jail authorities at the time of the last several productions as the accused is stated to be undergoing treatment in GMCH for is illness.

Hence, the Court considered that the bar of section 437 (1) CrPC. Would not be applicable in view of the proviso to the Section which relaxes he restrictions in case os sick person, amongst others.

In these facts and circumstances, the Court was of the view that in the interest of Justice the accused should be granted bail at this stage. He was allowed to go on bail of rupees 30,000 with one surety of the like amount to the satisfaction for the Court.