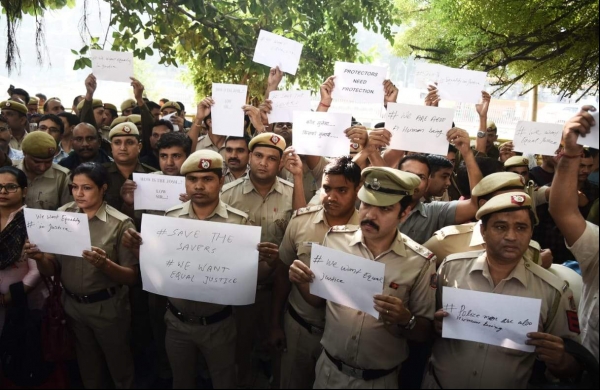 Stating that courts should treat all the parties "equitably", the Central IPS Association on Tuesday demanded, "All lawyers who were part of the violence should be identified, and befitting legal action, including cancellation of their licenses, should be initiated." The statement was issued in the wake of protest staged by Delhi police on Tuesday demanding action against lawyers...

Stating that courts should treat all the parties "equitably", the Central IPS Association on Tuesday demanded,

"All lawyers who were part of the violence should be identified, and befitting legal action, including cancellation of their licenses, should be initiated."

The statement was issued in the wake of protest staged by Delhi police on Tuesday demanding action against lawyers who were part of violence.  Videos of certain advocates assaulting policemen in court premises on Monday have surfaced in social media.

Even the Bar Council of India condemned this act of violence in its letter addressed to the District Bar Associations of Delhi and said that strict action could be taken against guilty Advocates. Reportedly, an FIR has been registered in this behalf with the Saket Police Station.

Condemning the attacks, the General Body Meeting of the Central IPS Association resolved,

"Police personnel are entitled to the same human rights as anyone else in the country and these ought to be stoutly defended."

"The Courts should treat all parties equitably and grant justice".

The IPS Association's resolution could be a result of the Delhi High Court's order dated November 3 whereby it directed suspension of two erring police officials and transfer of two senior police officials while directing that no coercive action should be taken against lawyers against whom FIRs were lodged by the Delhi Police for the clash that had taken place at the Tis Hazari Court complex.

The above said order was passed in suo moto hearing held by the bench comprising Chief Justice D N Patel and Justice C Harishanker on Sunday, November 3, after a scuffle broke out between the police officials and lawyers at the Tis Hazari Court on Saturday over a parking dispute within the court premises.

The high court had also ordered a judicial inquiry into the mishap, to be headed by Justice SP Garg, former judge of the Delhi High Court, with the assistance of CBI, Vigilance and IB, and to be concluded within six weeks.

On Tuesday, the Ministry of Home Affairs moved an urgent application in the High Court seeking a clarification that the November 3 order does not bar criminal action against lawyers for their subsequent act.

Justifying the police firing at the court premises, the Delhi Police said that a group of lawyers descended the police lockup and the gunshots were fired in air, only for self-defence. Nevertheless, the circumstances that led to gunshot injury to two lawyers were being investigated by the CFSL team.

While the IPS Association said that it stood in solidarity with its policemen brothers, thousands of Delhi Police personnel stood in protest outside the police headquarters on Tuesday. They demanded that criminal proceedings must be instituted based on complaints made by aggrieved police officials, against lawyers who indulged in violence.

The Police personnel also demanded "non-cooperation" with courts and lawyers by absolute withdrawal of police security from judges of all levels as well as from court premises. They also demanded resumption of Delhi Police Officials and Staff Association and sought enactment of a legislation for protection of all Police personnel.

Following the unceasing brawl, the elections of the Bar Associations at Tis Hazari and Karkardooma Courts were also postponed by the Delhi High Court, which were otherwise scheduled to be held on November 5 and November 7, respectively.