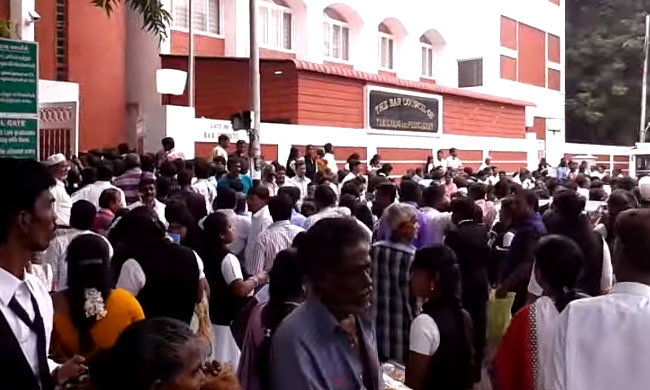 Pasting posters, putting up banners, beating drums and bursting fire crackers during the enrolment celebration of young lawyers have been banned, said the Bar Council of Tamil Nadu and Puducherry as it noted that such celebrations would entail "postponement of their enrolment by six months".

Calling such celebrations prejudicial to the dignity of the profession and public interest, the Bar Council passed the order on Monday barring such ceremonies.

According to the order, form-II of the enrolment application clearly prohibits a candidate from affixing posters, playing drums or permitting others to play drums and bursting fire crackers for the enrolment ceremony.

While so, after accepting and signing the form and assuring to abide by the provisions of the Advocates Act, many were found flouting the rules by placing banners and posters on the premises of the Bar Council building, it said.

Making it clear that its intention was not to punish anyone whose mistake was not intentional and not against public interest, but only to regulate "derailed" candidates and put them on right track, the Council in its order advised the candidates to strictly adhere to the rules.

A week ago, the Bar Council had passed an order of imposing a fine of Rs 10,000 on each of the 11 lawyers who violated the rule and placed huge banners around the Madras High Court and on the Bar Council premises.