Hostel Rules- Not Unfair To Treat Women and Men Differently In Matters Of Safety and Security: Madras HC [Read Judgment] 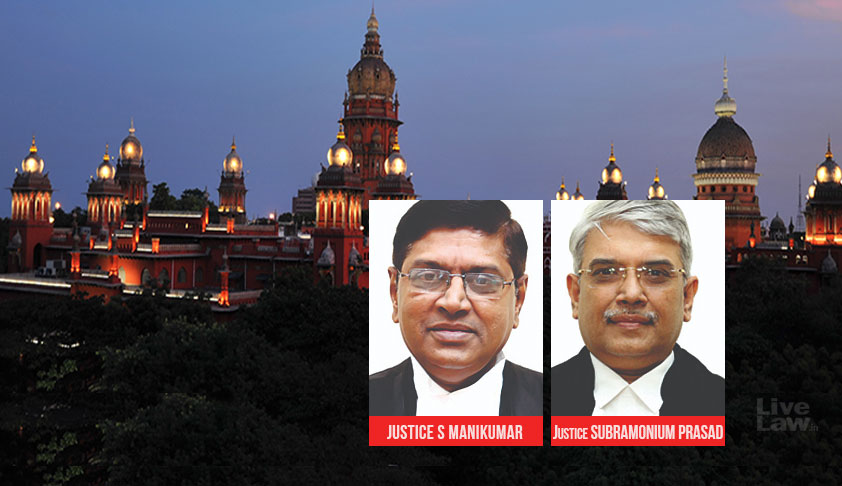 The Madras High Court has dismissed a Public Interest Litigation filed by some hostelers challenging the constitutionality of Tamil Nadu Hostels and Home for Women and Children (Regulation) Act, 2014 and the Rules. The bench comprising Justice S. Manikumar and Justice Subramonium Prasad observed that right of women to have empowerment on the basis of the economic status is...

The Madras High Court has dismissed a Public Interest Litigation filed by some hostelers challenging the constitutionality of Tamil Nadu Hostels and Home for Women and Children (Regulation) Act, 2014 and the Rules.

The bench comprising Justice S. Manikumar and Justice Subramonium Prasad observed that right of women to have empowerment on the basis of the economic status is altogether different from the mandatory duty of the State to provide security and safety to the women and children. It observed that treating men and women differently in the matter of security and safety cannot be termed as discrimination.

The Act has several provisions imposing conditions for registration, licencing, maintenance and to provide managers and security personnel and such others matters connected therewith, in hostels, lodging houses, and homes for children and women

According to PS Deepthi and some other students and employees (including some lawyers) who joined the petition, the Act, instead of protecting the women and children, destroys their freedom and independence in addition to making them jobless.

The petitioners had contended that they are equal to men and thus there is no need for any security personnel, burdening them with enhanced charges. Rejecting the said argument, the bench said:

"There is no unfair classification. The difference in treating women and children, in the matter of security and safety, cannot be compared to take of men, and the State Government enacting a special enactment exclusively for regulating Hostels, lodging houses, homes for women and children, has a rational nexus to the object sought to be achieved and thus there is no discrimination, violating Article 14 of the Constitution of India."

Yet another grievance of the petitioner is the provision which mandates the appointment of a Manager would invade the right to privacy of the inmates. The bench opined:

"The appointment of a manager is only to ensure proper maintenance of the hostel, health of the inmates and children, inmates of the hostel, lodging home or house for children and women, are not subject to any form of mental or physical harassment. Contention that right of privacy of the inmates would be affected by a Manager cannot be accepted for the reasons that the manager to be appointed in a women or children hostel would invariably be a woman only."

The court also noted that sufficient safeguards have been provided that the security personnel cannot enter the building. The Petitioners' argument was that the police is taking care of the safety of the entire population, free of cost and therefore they cannot be forced to bear the cost of engaging security personnel. Functioning of police to maintain law and order, public order and safety to the general public, cannot be compared to that of a Manager and Security Personnel mandated to be employed in hostels, lodging houses and homes for children and women, the vulnerable sections of the society, the court added.

CCTV Cameras Not Only Prevent Crimes, But Also Detect Them

With regard to their concerns about installation of CCTV cameras, the bench observed that they would not only prevent crime, but also in detection of the same. The court said:

"Contention of the petitioner that installation of CCTV cameras would invade the privacy of inmates and even if such installation is made, it would not prevent, sexual harassment, cannot be accepted for the reason that such installation is required only in a hostel, lodging house or home for women and children where more than fifty inmates are accommodated, and closed television or digital recorder has to be installed at every entry or exit points. No such appliances are to be installed in bedrooms and other places, where privacy has to be maintained."

Right Of Employment Not A Fundamental Right

The bench also rejected their contention that instead of protecting the women and children, the Act destroys the freedom and independence of women, rendered them as jobless. It is an untenable argument for the reasons that right of employment was never recognised as a fundamental right to be enforced, the court remarked.

The contentions that the space requirement prescribed by the Government for the hostels, lodging houses and homes for children and women is illegal and that the state has no power or authority to fix, space index which is the right of the petitioners to decide and elect depending upon their financial conditions, were also rejected. The court, in this regard, said:

"It is for the Government to prescribe the licencing conditions, standards of maintenance of hostels, lodging house, sanitation and other aspects and the petitioners have no legal right to question the same. As stated supra, as per Article 15 of the Constitution of India, States are empowered to enact laws in favour of in Children and Women."

Dismissing the petition, the bench observed that the Act is for a larger interest, aimed at the safety and security of women and children, in hostels, lodging houses and homes for children and women. It also rejected the contention that the state legislature has competence only in the matter of an enactment pertaining entry Inn and not relating to hostels, lodging hoses and houses for children and women. It said:

"When safety and security of children and women in hostels, lodging houses and homes for children and women, are the paramount objects, indeed there should be a exclusive enactment, to the vulnerable sections of the society. Concern of the State cannot be said to be, unrealistic and that special laws are unwarranted. In the light of the enabling provisions and having regard to the statement of objects and reasons for which Tamil Nadu Hostels and Homes for Women and Children (Regulation) Act 2014, is enacted, we see no discrimination and therefore the said contention is rejected."